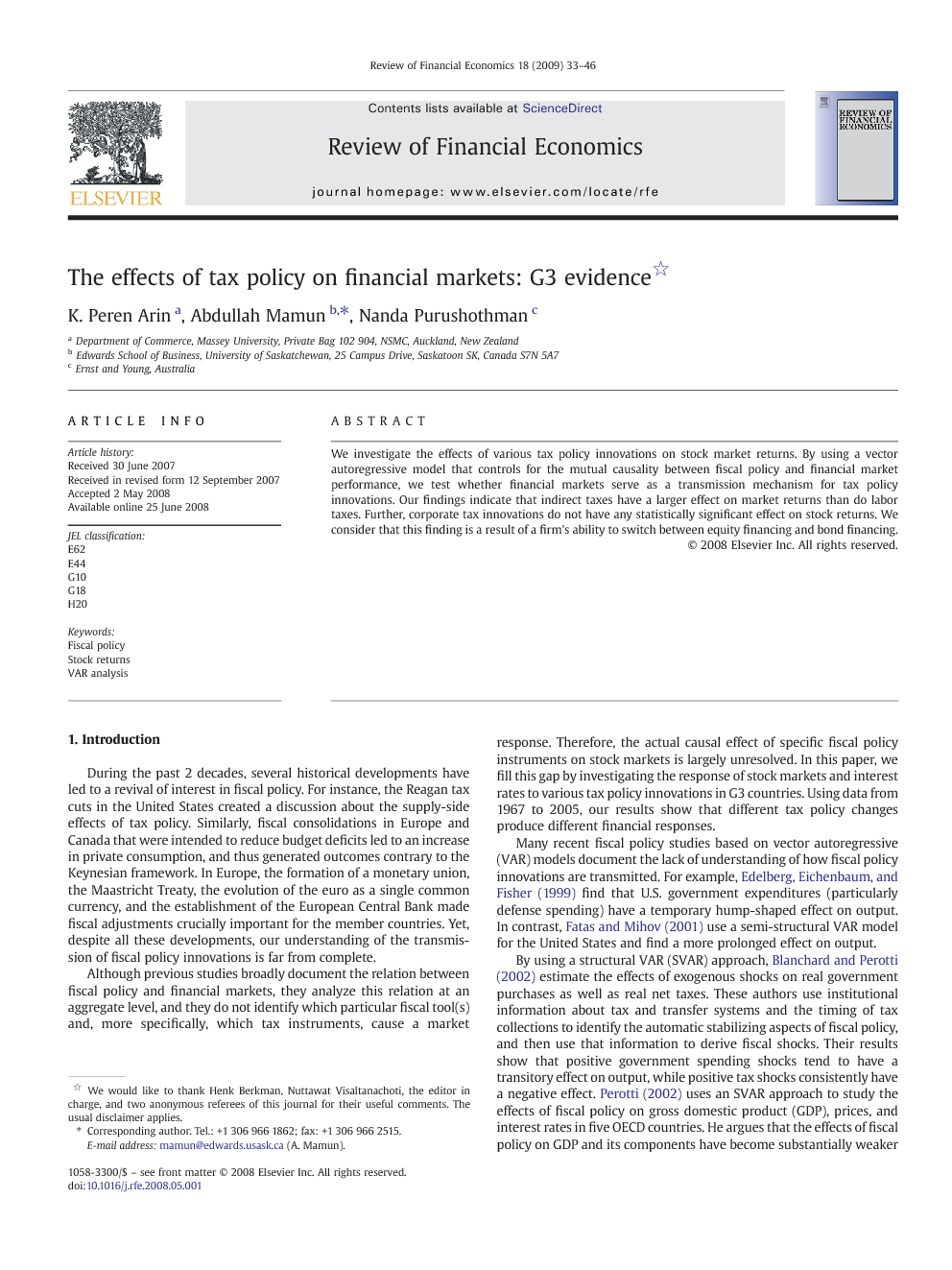 We investigate the effects of various tax policy innovations on stock market returns. By using a vector autoregressive model that controls for the mutual causality between fiscal policy and financial market performance, we test whether financial markets serve as a transmission mechanism for tax policy innovations. Our findings indicate that indirect taxes have a larger effect on market returns than do labor taxes. Further, corporate tax innovations do not have any statistically significant effect on stock returns. We consider that this finding is a result of a firm's ability to switch between equity financing and bond financing.

During the past 2 decades, several historical developments have led to a revival of interest in fiscal policy. For instance, the Reagan tax cuts in the United States created a discussion about the supply-side effects of tax policy. Similarly, fiscal consolidations in Europe and Canada that were intended to reduce budget deficits led to an increase in private consumption, and thus generated outcomes contrary to the Keynesian framework. In Europe, the formation of a monetary union, the Maastricht Treaty, the evolution of the euro as a single common currency, and the establishment of the European Central Bank made fiscal adjustments crucially important for the member countries. Yet, despite all these developments, our understanding of the transmission of fiscal policy innovations is far from complete. Although previous studies broadly document the relation between fiscal policy and financial markets, they analyze this relation at an aggregate level, and they do not identify which particular fiscal tool(s) and, more specifically, which tax instruments, cause a market response. Therefore, the actual causal effect of specific fiscal policy instruments on stock markets is largely unresolved. In this paper, we fill this gap by investigating the response of stock markets and interest rates to various tax policy innovations in G3 countries. Using data from 1967 to 2005, our results show that different tax policy changes produce different financial responses. Many recent fiscal policy studies based on vector autoregressive (VAR) models document the lack of understanding of how fiscal policy innovations are transmitted. For example, Edelberg, Eichenbaum, and Fisher (1999) find that U.S. government expenditures (particularly defense spending) have a temporary hump-shaped effect on output. In contrast, Fatas and Mihov (2001) use a semi-structural VAR model for the United States and find a more prolonged effect on output. By using a structural VAR (SVAR) approach, Blanchard and Perotti (2002) estimate the effects of exogenous shocks on real government purchases as well as real net taxes. These authors use institutional information about tax and transfer systems and the timing of tax collections to identify the automatic stabilizing aspects of fiscal policy, and then use that information to derive fiscal shocks. Their results show that positive government spending shocks tend to have a transitory effect on output, while positive tax shocks consistently have a negative effect. Perotti (2002) uses an SVAR approach to study the effects of fiscal policy on gross domestic product (GDP), prices, and interest rates in five OECD countries. He argues that the effects of fiscal policy on GDP and its components have become substantially weaker in the past 20 years. He also contends that in general, the tax multipliers tend to be negative, but small; however, there is some evidence for positive tax multipliers. Net tax shocks appear to have negative small effects on prices. Finally, Perotti indicates that the United States is an outlier in many dimensions, so the responses to fiscal shocks that researchers estimate using U.S. data often do not represent the average OECD country. Perotti's (2002) results are consistent with the findings of Baldacci, Cangiano, Mahfouz, and Schimmelpfennig (2002), who argue that although research generally suggests small, positive spending multipliers and small, negative tax multipliers, there is some evidence for both negative spending multipliers and positive tax multipliers. The conclusions reached by these studies suggest that the cross-country variation in the sign and magnitude of fiscal multipliers needs further scrutiny. There is substantial evidence that suggests monetary policy has an effect on stock returns (see Bohl et al., 2007, Bordo and Wheelock, 2007 and Chen, 2007). Recently, some empirical studies consider the possibility that fiscal policy may also have some effects on financial markets. Ardagna (2005), Darrat, 1988 and Darrat, 1990, and Van Aarle, Garretsen, and Gobbin (2003) document this relation. Using Canadian data, Darrat (1988) shows that fiscal policy plays an important role in determining stock market return. He finds a significant lag relation between fiscal measure and stock market return. Tavares and Valkanov (2001) argue that fiscal policy has both direct and indirect effects on financial markets. The direct effect of fiscal policy relates to a government's influence over the bonds market and interest rates, and the indirect effect refers to a government's influence over stock market returns. Using a VAR-based approach, they observe shocks to total government expenditures and total revenues on macroeconomic variables, including the stock and bond markets. They find that fiscal policy shocks account for 3% to 4% of the variation in unexpected excess stock returns and even larger unexpected excess bond returns. These studies analyze the effects of fiscal shocks by using aggregated, rather than disaggregated, data. However, there are a number of studies that suggest that this aggregation might conceal the effects of fiscal policy. This evidence is documented in Arin and Koray (2005), who examine different types of government revenue and spending innovations to analyze the response of the U.S. macroeconomy in the short run. They find that an increase in indirect taxes or corporate taxes has a contractionary effect on the economy, but an increase in personal taxes is neither contractionary nor expansionary. On the spending side, they find that an increase in government wages and salaries has a contractionary effect on the economy, but an increase in defence spending is expansionary. Kneller, Bleaney, and Gemmell (1999) and Lee and Gordon (2005) show that in the long run, not all taxes have the same effect on the economy. In particular, Kneller et al. (1999) show that average income tax rate and average corporate tax rate are distortionary in the long run. Lee and Gordon (2005) argue that only a top marginal corporate tax rate has negative effects on output growth. The paper is organized as follows. Section 2 presents our data set. In Section 3 we discuss the empirical methodology. We present our results in Section 4 and our robustness checks in Section 5. Section 6 concludes.

The effect of Fiscal policy is transmitted in several ways: for example, through financial markets. In a framework that integrates both fiscal and monetary policies (in the form of the Taylor Rule), our empirical results show that a government's choice of tax instrument has a significant influence on stock market returns. We consider various components of tax policy and find that not all taxes depress stock returns. Both indirect and labor taxes have significant negative effects on excess market returns, but corporate taxes produce no significant response. The magnitude of indirect taxes' effect on stock returns is larger than the effect of labor taxes. In the context of corporate tax innovations, the position of a firm tends to be less affected as a result of its ability to choose its form of capital structure. That is, a firm can choose between debt and equity financing. When faced with increased corporate tax obligations, a firm is somewhat able to negate the effects on it's equity return by switching to bond financing. This is illustrated by the corresponding increase in the interest rate.