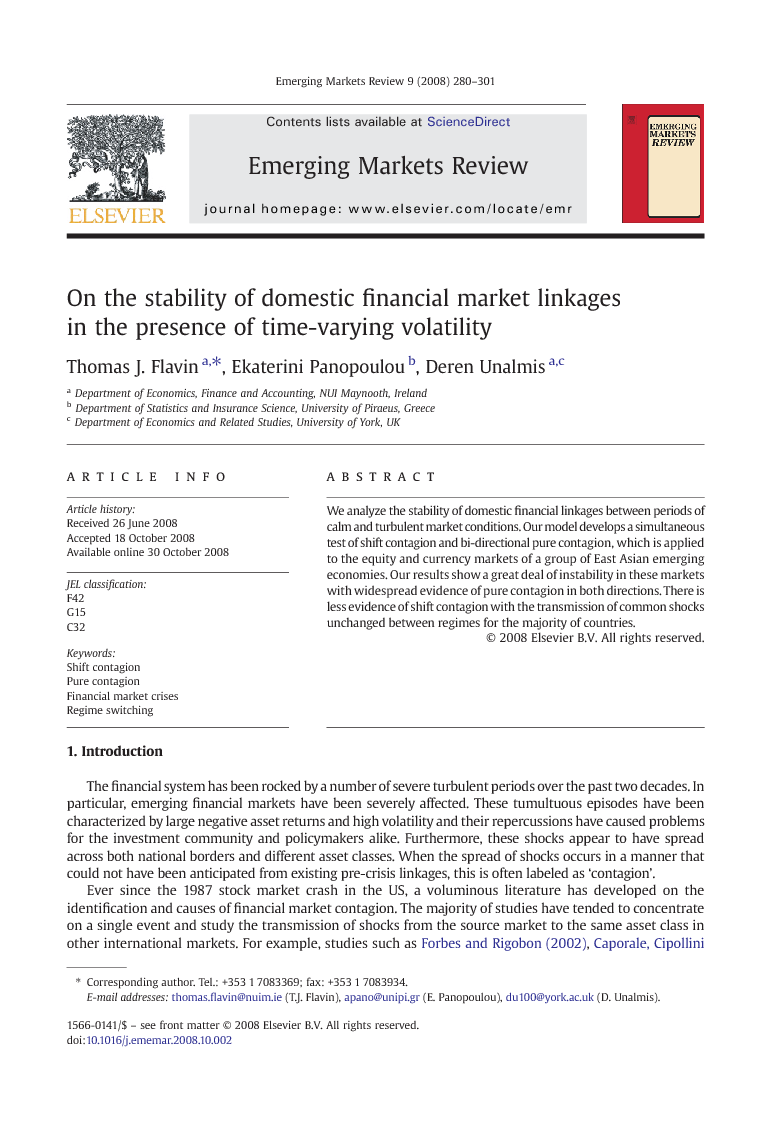 We analyze the stability of domestic financial linkages between periods of calm and turbulent market conditions. Our model develops a simultaneous test of shift contagion and bi-directional pure contagion, which is applied to the equity and currency markets of a group of East Asian emerging economies. Our results show a great deal of instability in these markets with widespread evidence of pure contagion in both directions. There is less evidence of shift contagion with the transmission of common shocks unchanged between regimes for the majority of countries.

The financial system has been rocked by a number of severe turbulent periods over the past two decades. In particular, emerging financial markets have been severely affected. These tumultuous episodes have been characterized by large negative asset returns and high volatility and their repercussions have caused problems for the investment community and policymakers alike. Furthermore, these shocks appear to have spread across both national borders and different asset classes. When the spread of shocks occurs in a manner that could not have been anticipated from existing pre-crisis linkages, this is often labeled as ‘contagion’. Ever since the 1987 stock market crash in the US, a voluminous literature has developed on the identification and causes of financial market contagion. The majority of studies have tended to concentrate on a single event and study the transmission of shocks from the source market to the same asset class in other international markets. For example, studies such as Forbes and Rigobon (2002), Caporale, Cipollini and Spagnolo (2005), Chiang, Jeon and Li (2007) and Flavin and Panopoulou, in press and Flavin and Panopoulou, 2008 have focused on equity markets; while bond markets are analyzed in Favero and Giavazzi (2002) and Dungey, Fry, Gonzalez-Hermosillo and Martin (henceforth DFGM) (2006); with currency markets receiving the attention of Cerra and Saxena (2002) and Dungey, Fry and Martin (2004). More recently, a number of studies have sought to examine channels of contagion between different asset classes across geographical borders. Hartmann, Straetmans and de Vries (2004) focus on the stock and bond markets of the G5 countries, while Dungey and Martin (2007) and DFGM (2008) analyze East Asian and Latin American markets respectively. Ito and Hashimoto (2005) investigate the interactions between currency and equity markets in East Asian markets. However, less attention has been afforded to contagious effects between different asset types within the same country. This is an important question as policymakers seek to understand the source and evolution of adverse shocks. Likewise, portfolio managers who are exposed to foreign asset risk will want to be familiar with the stability of asset linkages during varying market conditions. If asset returns exhibit increased co-movement during a crisis, then this will compound losses on a country-specific portfolio, whereas markets moving in the opposite direction would provide a hedge against losses in one market. We focus on identifying channels of contagion between currency and equity markets in East Asia during periods of high volatility. In particular, we test for both shift and pure contagion within a unified framework. Shift contagion is defined as a change in the normal relationship between pairs of markets during a crisis. Normal levels of market interdependence are often attributed to linkages such as financial flows or exposure to common shocks. Shift contagion implies that the diffusion of common shocks changes between low- and high-volatility regimes; thereby causing the ‘normal’ relationship between market pairs to become unstable during episodes of financial turmoil. On the other hand, pure contagion is suffered during a crisis period when a shock that is normally idiosyncratic spills over to another market (becoming an additional common factor). The transmission of these idiosyncratic shocks occurs through channels that are not identifiable during normal market conditions.1 The main innovation of this paper is that we build an empirical model that allows us to simultaneously capture shift and bi-directional pure contagion.2 Accounting for these bi-directional effects is very important as it allows us to fully assess the extent and impact of market interactions. The correct identification of the type of contagion operating between markets and the stability of market linkages is vital to prescribe appropriate policy. There is strong theoretical and empirical evidence to suggest that equity and foreign exchange markets are interlinked. Pavlova and Rigobon (2007) develop a theoretical model of stock, bond and exchange rate co-movements, where the sign of the correlation between stock prices and the exchange rate depends upon the relative importance of supply and demand shocks in the economy. Pan, Fok and Liu (2007) find significant evidence of causal relationships between stock and currency markets, though the direction of causality differs across the sampled countries. Likewise, Granger, Huang and Yang (2000) provide evidence of feedback effects between many East Asian stock and FX markets. While, these studies provide evidence of dynamic linkages between markets, our focus is on the transmission of contemporaneous shocks between market pairs. Our results show strong evidence of bi-directional pure contagion between equity and currency markets. In particular, shocks that are normally specific to the foreign exchange market tend to be transmitted to the equity market for all countries. Similarly, high-volatility equity-specific shocks generate contagious effects in the currency market of all countries except Taiwan. On the other hand, there is less evidence of shift contagion. Only Korea and the Philippines exhibit any statistical evidence of instability in the transmission of common shocks between calm and turbulent market conditions. An analysis of the conditional variance shows that common shocks play a greater role in equity markets than in currency markets. Pure contagion is present in all markets but its overall contribution to risk varies across countries. The paper is organized as follows. Section 2 presents our empirical model. Section 3 describes the data and discusses the filters applied to the asset returns. Section 4 reports our empirical findings for the contagion tests, while our concluding remarks are contained in Section 5.

We develop a model that allows us to simultaneously test for the presence of both shift and bi-directional pure contagion. This model is well suited to analyzing the stability of linkages between domestic equity and foreign exchange markets. In particular, we focus on the stability of the transmission mechanism of common shocks across different volatility regimes, i.e. shift contagion, and concurrently we investigate if asset-specific shocks spill over to other assets during periods of high volatility, i.e. pure contagion. Our analysis concentrates on the emerging financial markets of East Asia over a sample period when their exchange rates were floating against the US dollar. We find widespread evidence of pure contagious effects. Shocks that originate in either equity or currency markets influence the other market during turbulent market conditions. In essence, the once asset-specific shock becomes an additional common factor during episodes of high-volatility. Our results convey the importance of allowing for bi-directional pure contagion, as in practice the source of the adverse shock can be difficult to identify. In contrast, there is relatively little statistical evidence of shift contagion. For the majority of countries, both asset returns respond in a stable manner regardless of the volatility state of the common shock. We also investigate the economic significance of the pure contagious effects. Pure contagion can account for up to 30% of the asset co-movement observed. While it varies substantially, its contribution to the conditional correlation generated by our model is always positive. Likewise, we decompose conditional variances by state into components due to the common factor, own idiosyncratic factors and pure contagion. The common shock is the dominant factor in determining equity market volatility but its influence on currency risk is negligible. The latter market is most influenced by its own asset-specific shocks. Pure contagious effects are important for both asset types but particularly for the FX markets of the most recently floated currencies. In summary, the linkages between equity and currency markets in emerging economies do not appear to be stable. There is little statistical evidence that common shocks cause this instability but rather it appears to emanate from transmission channels that emerge when the asset-specific shock of either market experiences episodes of high volatility. This finding is likely to concern both policymakers and investors alike. Policymakers need to take note that high-volatility asset-specific shocks may not be contained for long and therefore a speedy response is necessary to prevent the spread of turbulence throughout the financial system of the affected country. Non-domestic equity investors will be worried that pure contagious effects will further compound their equity losses as the foreign exchange component of overall return falls simultaneously, while domestic equity investors may find it more difficult to diversify away from home assets in bear markets due to a loss of purchasing power of the proceeds of portfolio liquidation.