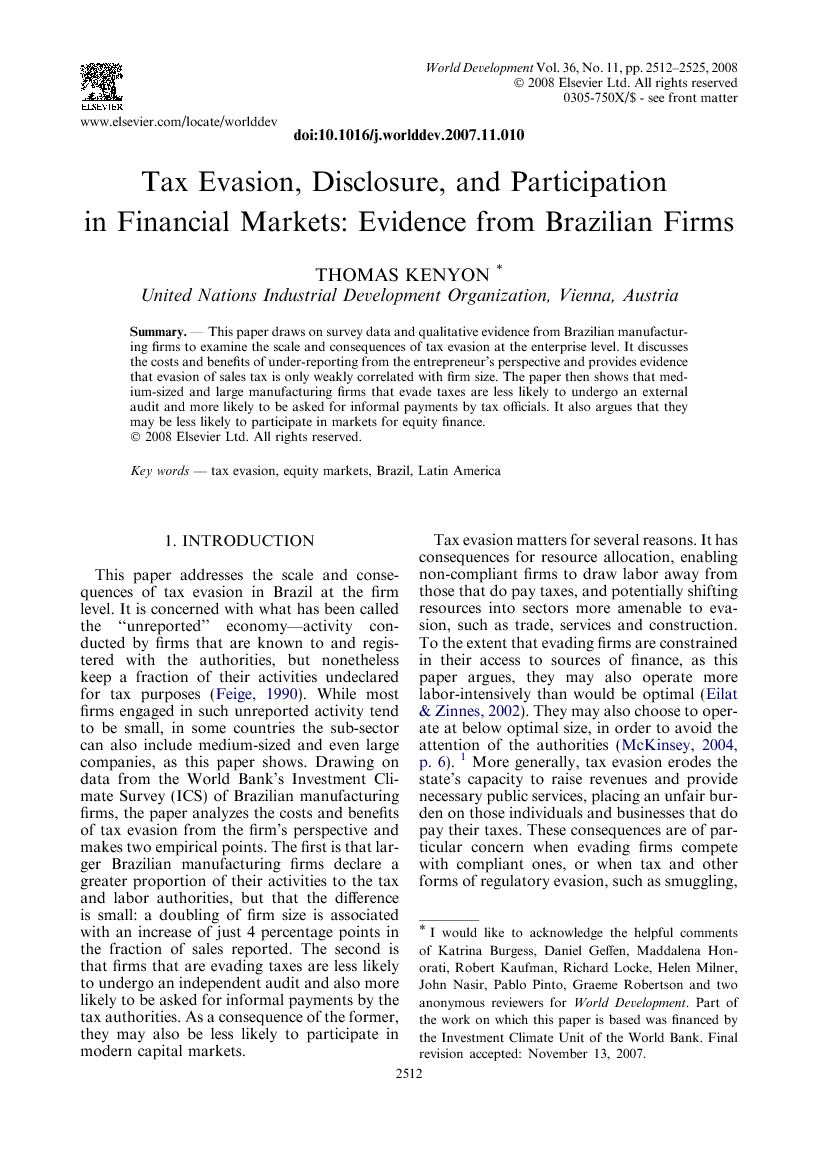 This paper draws on survey data and qualitative evidence from Brazilian manufacturing firms to examine the scale and consequences of tax evasion at the enterprise level. It discusses the costs and benefits of under-reporting from the entrepreneur’s perspective and provides evidence that evasion of sales tax is only weakly correlated with firm size. The paper then shows that medium-sized and large manufacturing firms that evade taxes are less likely to undergo an external audit and more likely to be asked for informal payments by tax officials. It also argues that they may be less likely to participate in markets for equity finance.

This paper addresses the scale and consequences of tax evasion in Brazil at the firm level. It is concerned with what has been called the “unreported” economy—activity conducted by firms that are known to and registered with the authorities, but nonetheless keep a fraction of their activities undeclared for tax purposes (Feige, 1990). While most firms engaged in such unreported activity tend to be small, in some countries the sub-sector can also include medium-sized and even large companies, as this paper shows. Drawing on data from the World Bank’s Investment Climate Survey (ICS) of Brazilian manufacturing firms, the paper analyzes the costs and benefits of tax evasion from the firm’s perspective and makes two empirical points. The first is that larger Brazilian manufacturing firms declare a greater proportion of their activities to the tax and labor authorities, but that the difference is small: a doubling of firm size is associated with an increase of just 4 percentage points in the fraction of sales reported. The second is that firms that are evading taxes are less likely to undergo an independent audit and also more likely to be asked for informal payments by the tax authorities. As a consequence of the former, they may also be less likely to participate in modern capital markets. Tax evasion matters for several reasons. It has consequences for resource allocation, enabling non-compliant firms to draw labor away from those that do pay taxes, and potentially shifting resources into sectors more amenable to evasion, such as trade, services and construction. To the extent that evading firms are constrained in their access to sources of finance, as this paper argues, they may also operate more labor-intensively than would be optimal (Eilat & Zinnes, 2002). They may also choose to operate at below optimal size, in order to avoid the attention of the authorities (McKinsey, 2004, p. 6).1 More generally, tax evasion erodes the state’s capacity to raise revenues and provide necessary public services, placing an unfair burden on those individuals and businesses that do pay their taxes. These consequences are of particular concern when evading firms compete with compliant ones, or when tax and other forms of regulatory evasion, such as smuggling, become a source of competitive advantage.2 Under these circumstances, the presence of a large shadow economy can undermine the social contract that exists between the state and compliant economic actors, potentially leading to the disintegration of norms that encourage compliance (Gerxhani, 2004). The distorting influence of tax evasion on factor markets indicates the need for a more holistic approach to microeconomic reform in developing countries. As an influential study has put it, “Another set of big think questions centers on the proposition… that the benefits from any one set of reforms are significantly enhanced when other markets are well functioning… Comparative analysis of policy changes in countries where polices toward other sectors vary may yield valuable insights” (Krueger, 2000). This is of particular interest to a country like Brazil, where access to finance is one of the most severe firm-level constraints on economic growth (World Bank, 2005). It should also be of interest to policy-makers trying to stimulate equity market development. The practical implication is that reforms to capital market regulation are unlikely to yield significant growth in financial intermediation unless policy-makers also address the causes of tax evasion. This in turn requires a careful approach that induces firms to comply with their tax and regulatory obligations while avoiding driving them out of business altogether.

What have we learnt from this analysis? The data for manufacturing firms from Brazil show that tax evasion is a matter of degree and that it is not limited to small and medium-sized enterprises. Even quite large firms acknowledge concealing around a quarter of their sales from the tax authorities—assuming that the level of compliance reported by the firm as typical for its area of activity corresponds to the level actually practiced by the firm itself. The regression analysis also illustrates the firm-level economic costs of tax evasion. Enterprises that are evading taxes are less likely to obtain an external audit, possibly because they are worried that disclosure will alert the tax authorities. They are also somewhat less likely to issue new shares to finance their working capital and investment requirements, and more likely to rely on informal sources of finance such as moneylenders, though the effects observed in this dataset are small. The analysis also shows that manufacturing firms operating in an environment in which tax evasion is more prevalent are more likely to suffer demands for bribes from corrupt officials and are less likely to have a say in regulations that affect their business. I interpret this as evidence that the firms’ decision to evade renders them vulnerable to blackmail and excludes them from participation in formal decision-making institutions. But an alternative explanation, also consistent with the data, is that evading firms are engaged in a voluntary transaction by paying government inspectors to look the other way. Either way, the results suggest that the problem is more one of corruption than identification per se. It is not so much that tax evasion is impossible to detect, rather that a dysfunctional system of tax administration prevents tax laws from being enforced properly. These findings do not necessarily mean that these firms themselves feel constrained by their lack of access to capital markets. It is possible, for instance, that the entrepreneurs in question might be quite willing to forfeit these benefits as a condition of paying less tax, consistent with the voluntarist view of evasion outlined above. But this does not imply that such an outcome is desirable. After all, what is “voluntary” on the part of the firm—in the sense that it represents a rational response to economic circumstances—may not be socially optimal. There is little payoff from strengthening minority shareholder protections, for instance, if firms are not going to access capital markets because they are afraid of alerting the tax authorities to their existence. Furthermore, if tax evasion has this effect on capital market participation, it may have a similar impact on other markets—including those for skills. Indeed, it is likely to undermine the viability of any arms-length transaction that is based on disclosure and transparency.