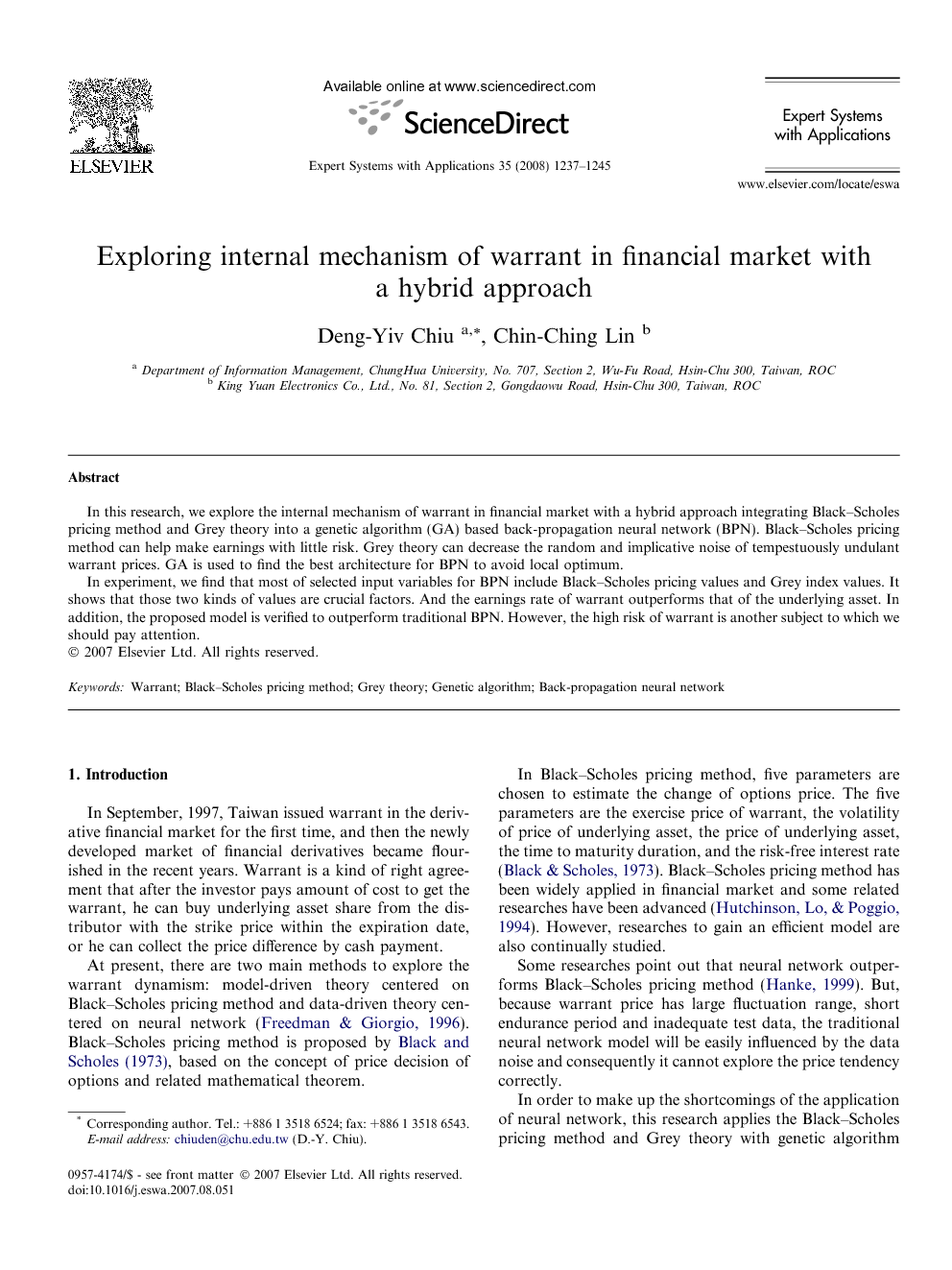 In this research, we explore the internal mechanism of warrant in financial market with a hybrid approach integrating Black–Scholes pricing method and Grey theory into a genetic algorithm (GA) based back-propagation neural network (BPN). Black–Scholes pricing method can help make earnings with little risk. Grey theory can decrease the random and implicative noise of tempestuously undulant warrant prices. GA is used to find the best architecture for BPN to avoid local optimum. In experiment, we find that most of selected input variables for BPN include Black–Scholes pricing values and Grey index values. It shows that those two kinds of values are crucial factors. And the earnings rate of warrant outperforms that of the underlying asset. In addition, the proposed model is verified to outperform traditional BPN. However, the high risk of warrant is another subject to which we should pay attention.

In September, 1997, Taiwan issued warrant in the derivative financial market for the first time, and then the newly developed market of financial derivatives became flourished in the recent years. Warrant is a kind of right agreement that after the investor pays amount of cost to get the warrant, he can buy underlying asset share from the distributor with the strike price within the expiration date, or he can collect the price difference by cash payment. At present, there are two main methods to explore the warrant dynamism: model-driven theory centered on Black–Scholes pricing method and data-driven theory centered on neural network (Freedman & Giorgio, 1996). Black–Scholes pricing method is proposed by Black and Scholes (1973), based on the concept of price decision of options and related mathematical theorem. In Black–Scholes pricing method, five parameters are chosen to estimate the change of options price. The five parameters are the exercise price of warrant, the volatility of price of underlying asset, the price of underlying asset, the time to maturity duration, and the risk-free interest rate (Black & Scholes, 1973). Black–Scholes pricing method has been widely applied in financial market and some related researches have been advanced (Hutchinson, Lo, & Poggio, 1994). However, researches to gain an efficient model are also continually studied. Some researches point out that neural network outperforms Black–Scholes pricing method (Hanke, 1999). But, because warrant price has large fluctuation range, short endurance period and inadequate test data, the traditional neural network model will be easily influenced by the data noise and consequently it cannot explore the price tendency correctly. In order to make up the shortcomings of the application of neural network, this research applies the Black–Scholes pricing method and Grey theory with genetic algorithm (GA) based back-propagation neural network (BPN) to explore the dynamism of warrant. Black–Scholes pricing method is used to judge the reasonableness of price and to decrease predict error. The Grey theory is used to decrease the influence degree of data noise on the predict model. The main characteristics of Grey theory is that it can be applied in conditions when the information is not complete, the behavior pattern is not definite and the operating mechanism is ambiguous, to make efficient process, in accordance with systematic associative analysis, model construction, predict, decision and control (Deng, 1989). Finally, genetic algorithm is applied to select the architecture of BPN to avoid local optimum. In addition, Rolling model is used to train the proposed integrated model. Also, the experiments verify that the proposed model outperforms the traditional BPN. In the literature, the Black–Scholes price method can evaluate reasonableness of warrant (Cretien, 2006 and Heffes, 2003). Grey theory can be applied to financial prediction (Chi, Chen, & Cheng, 1999). GBPN is used to select suitable input variables and promote financial prediction (Matilla-Garci’a and Arguello, 2005, Fu and Xu, 1997, Deboeck and Deboeck, 1992 and Kim and Han, 2000). However, most of the input variables are traditional indexes. Besides traditional indexes, varying input variables, such as those produced by Black–Scholes pricing method and Grey theory, can be considered. This paper is organized as follows: in Section 2, we describe the Black–Scholes pricing method. Section 3 describes basic Grey theory concepts. Section 4 describes the genetic based back-propagation neural network model. Section 5 presents the experimental results of the proposed method and shows comparisons with other approaches. Section 4.2 summarizes the results and draws a general conclusion.

This research combines Black–Scholes pricing method, Grey theory which is suit for short time test, and genetic based back-propagation neural network. We explore the internal mechanism of warrant and the relationship between the warrant and underlying asset, as reference for future researches. In addition, according to the experimental results, we conclude findings as follows: (1) In the proposed model, most of selected input values for BPN include Black–Scholes pricing values and Grey index values. It means that those two kinds of input values own certain level of influence in exploring internal mechanism of warrant. (2) Under the same time period and the same buying-and-selling strategy, the earnings rate of investing warrant could significantly excess that of the underlying asset of the warrant. In the future, some other works can be performed: (1) Apply other noise reduction approaches to improve the performance of back-propagation neural network. That is, the future works can try to reduce the influence of data noise, and to increase accuracy rate. (2) Use other indexes to evaluate warrant and to promote the relationship between the predict model and warrant. (3) Use other derivatives to explore the relationship between predict model and underlying asset. (4) Explore more advanced researches on Option or TAIEX index option(TXO), extending the objective of study to Taiwan Stock Exchange Capitalization Weighted Stock Index. (5) Utilize different artificial intelligent techniques, such as support vector machine to replace back-propagation neural network as core structure of study.