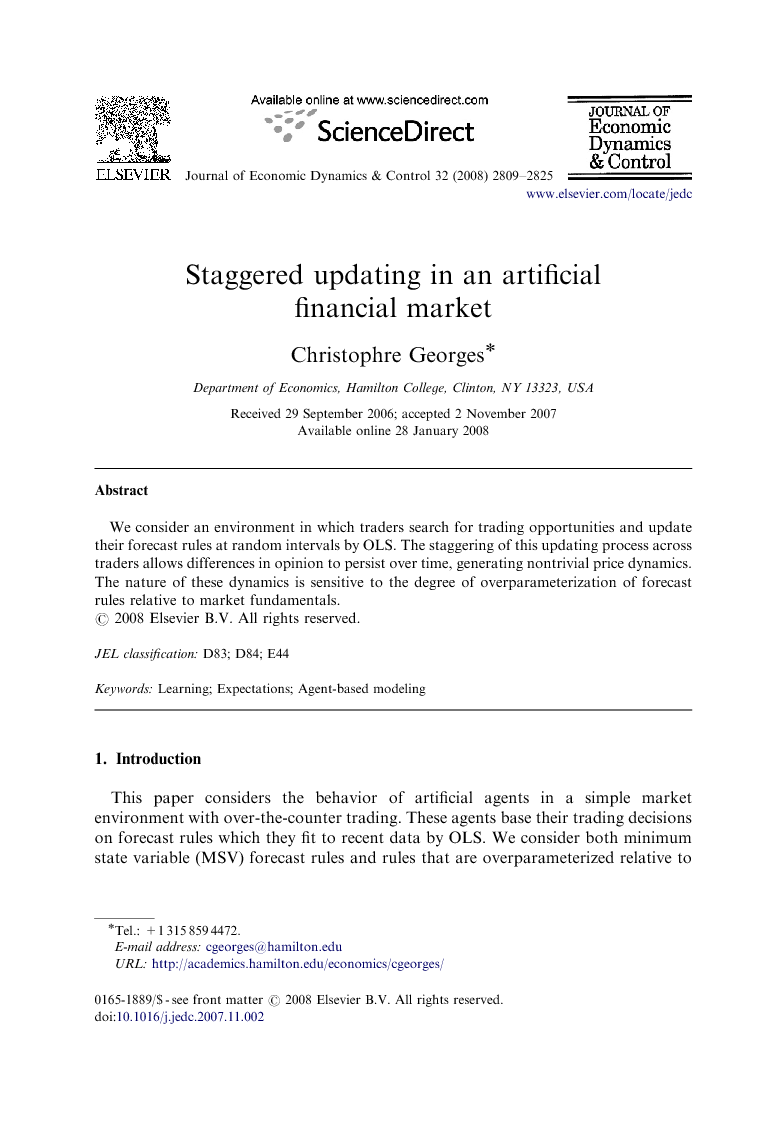 We consider an environment in which traders search for trading opportunities and update their forecast rules at random intervals by OLS. The staggering of this updating process across traders allows differences in opinion to persist over time, generating nontrivial price dynamics. The nature of these dynamics is sensitive to the degree of overparameterization of forecast rules relative to market fundamentals.

This paper considers the behavior of artificial agents in a simple market environment with over-the-counter trading. These agents base their trading decisions on forecast rules which they fit to recent data by OLS. We consider both minimum state variable (MSV) forecast rules and rules that are overparameterized relative to the fundamentals of the market. Agents have limited memory and face random wait times between updates. Simulation results for the MSV case are consistent with the analytical results of Honkapohja and Mitra (2003). Price dynamics converge to a noisy version of the stationary rational expectations equilibrium. The limited memory of agents causes learning to be incomplete, and there is persistent excess volatility of asset returns. Here, however, this volatility depends crucially on the heterogeneity of expectations which is sustained by the staggering of rule updating across agents. When agents use overparameterized forecasting rules, the ongoing discovery and adoption of rules far from the MSV rational expectations rule induces heightened volatility, volatility clustering and the occasional formation of explosive bubbles. The frequency of these bubbles is decreasing in the memory of the agents and increasing in the rate of updating (i.e., the rate of learning) and the degree of overparameterization of forecast rules. We also show that the use of overparameterized forecast rules can survive specification testing by agents who wish to avoid overfitting the available data. Our focus on overparameterized forecasting rules is motivated by Grandmont (1998), who argues that, in the face of model uncertainty, economic agents should be prepared to extrapolate a wide variety of trends from the recent past. This stands in contrast to the recent literature on adaptive learning by agents with misspecified forecasting models that are underparameterized relative to the market fundamentals (Evans and Honkapohja, 2001, Chapter 13; Cho et al., 2002 and Branch and Evans, 2006).1 The model is closer in spirit to that of Bullard et al. (2007), who consider ‘add factors’ in forecasts.2 There is now a large literature on heterogeneous agent and agent-based models in finance (as for example surveyed by Hommes, 2006, LeBaron, 2006 and Samanidou et al., 2007). Whereas many extant models (e.g., Lux, 1995, Alfarano and Lux, 2007, Brock and Hommes, 1998, Boswijk et al., 2007, Chiarella and Iori, 2002 and LeBaron and Yamamoto, 2006) focus on the interaction of a small number of trader types, we allow for a continuum of technical forecasting rules. This continuum includes rules that are consistent with a variety of momentum and fundamentalist type beliefs as well as rational expectations. Agents employ a straightforward method of rule updating (OLS), and the staggering of rule updating is the sole source of heterogeneity across agents. Other models of expectational heterogeneity that have been proposed in the economics and finance literatures include the ‘sticky information’ approach to the Phillips curve offered by Mankiw and Reis (2002), Carroll's (2003) model of information diffusion, stochastic choice models such as that used by Brock and Hommes (1998), and LeBaron's (2001) model with heterogeneity of memory length. In game theory, Blume (1993) and others have combined inertia in decision making with stochastic choice.3 In the present approach, forecasts are updated by all agents in each period using the most current data, and there is no inertia in decision making, but there is staggered updating of the forecasting model. Expectations are not sticky per se, only the rules used to form these expectations.4 Georges and Wallace (2004) have explored this environment with agents who grope in a less directed way in their search for accurate forecast rules. Under the evolutionary algorithm employed there, traders can learn through both individual experimentation and social learning, but the process of individual experimentation is undirected. Here we remove that source of forecasting error by allowing agents to find the rule with the best fit to the recent data each time they update their rules. Interestingly, adding direction to the search process in this way does not appear to diminish the diversity of expectations that emerges in simulations nor eliminate the resulting volatility of prices and returns. Indeed, it may lead to greater diversity and volatility for reasons that we explore below.

We consider the evolution of price in an artificial financial market in which technical traders formulate orders and search for trading partners. All traders use forecast rules that nest the MSV REE forecast rule and update their rules by OLS estimation with limited memory. The staggering of this updating across traders is sufficient to generate persistent diversity of expectations and nontrivial price dynamics. The timing of forecast rule updating is the sole source of expectational heterogeneity in the model and thus is the ultimate source of excess volatility in the model. When forecast rules are overparameterized relative to the MSV REE rule the ongoing discovery and adoption of new rules can generate volatility clustering and excess kurtosis of returns and the formation of explosive price bubbles. Simulation results indicate that the incidence of these bubbles is increasing in the degree of overparameterization and the frequency of rule updating (the rate of learning) and decreasing in the memory employed by the agents in the model and that, with sufficient overparameterization, bubbles can emerge even when agents have substantial memory. The use of overparameterized rules is diminished but not eliminated if the agents conduct specification tests in an effort to avoid overfitting the available data.