عنوان انگلیسی
The reaction of the Australian financial markets to the interest rate news from the Reserve Bank of Australia and the U.S. Fed
دانلود فوری مقاله + سفارش ترجمه 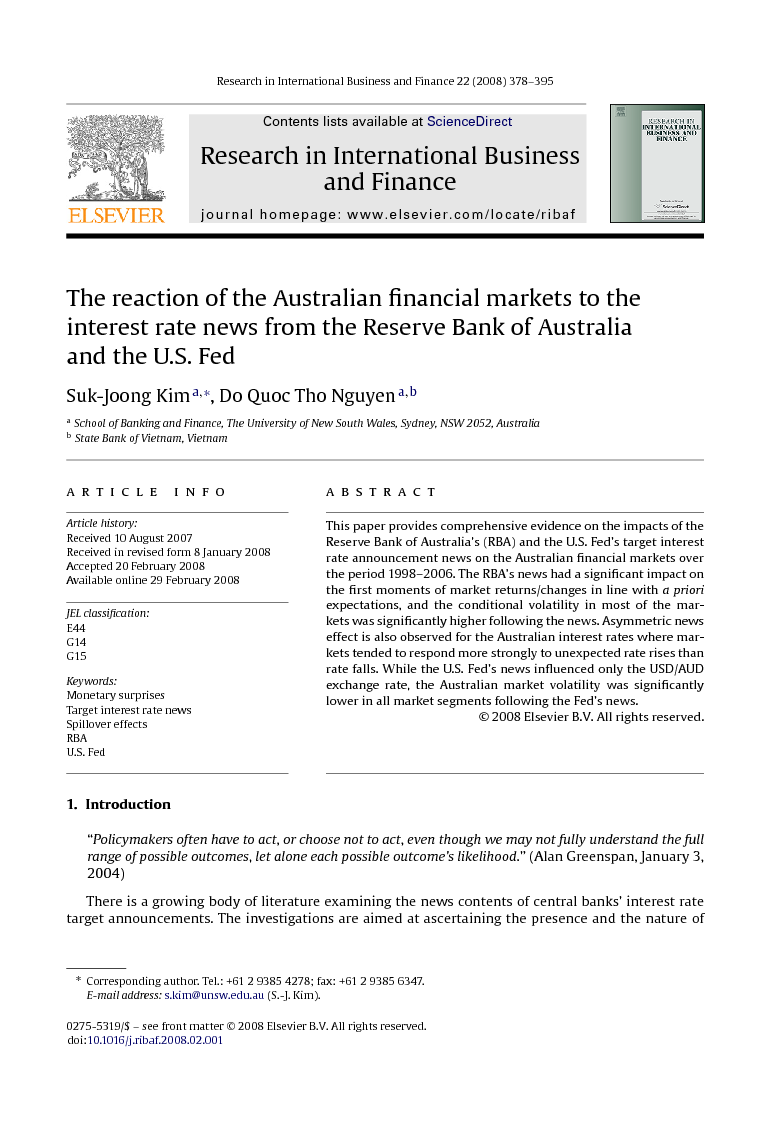 This paper provides comprehensive evidence on the impacts of the Reserve Bank of Australia's (RBA) and the U.S. Fed's target interest rate announcement news on the Australian financial markets over the period 1998–2006. The RBA's news had a significant impact on the first moments of market returns/changes in line with a priori expectations, and the conditional volatility in most of the markets was significantly higher following the news. Asymmetric news effect is also observed for the Australian interest rates where markets tended to respond more strongly to unexpected rate rises than rate falls. While the U.S. Fed's news influenced only the USD/AUD exchange rate, the Australian market volatility was significantly lower in all market segments following the Fed's news.

This paper provides comprehensive evidence on the impacts of the RBA's and the U.S. Fed's target interest rate news on the various segments of the Australian financial markets. We report a number of important findings. First, we find that the RBA's target interest rate news has statistically significant impacts on the conditional means of the daily returns/changes in the Australian debt, foreign exchange and stock markets. Unexpected rate rise announcements significantly raised the 90-day bank bill and the 3-year government bond interest rates, appreciated the USD/AUD exchange rate in the spot and 1- and 3-month forward markets, and stimulated two bank stock returns (NAB and WBC). In addition, we find that the news effect is stronger at the short-term ends of the interest rates and forward exchange rates. Second, we find that the news raised the level of volatility in most cases. Apparently, when markets were caught by surprise the implications of the changes were interpreted differently in the markets. The resulting heterogeneity of opinions would have led to an increased volume of trade and hence higher volatilities on the days of the announcements with an unexpected target rate change. Third, we find some evidence for asymmetric effects of policy surprises. Markets tend to respond more strongly to unexpected rate rises than rate falls, in general. Fourth, the U.S. Fed's target rate news significantly reduced the volatility in the Australian markets. We argue that this is due to (i) the market momentum in the U.S. of the volatility-reducing effect of the Fed's news was spilt over to the Australian market leading to similar reductions in volatility, (ii) and to the Fed's news resolving the level of uncertainly in Australia regarding the U.S. economy which has a direct bearing on that of the Australia's. These findings have important implications for policy makers and market participants alike. By providing comprehensive evidence on not only the RBA's target interest rate announcement news effects but also on the spillover effects of the U.S. Fed's target interest rate news on various segments of the Australian financial markets, this research provides an enhanced understanding of the short-term transmission mechanism of the interest rate news. An interesting extension would be to examine higher frequency responses to the interest rate announcement news in Australia. We leave this avenue for future studies.