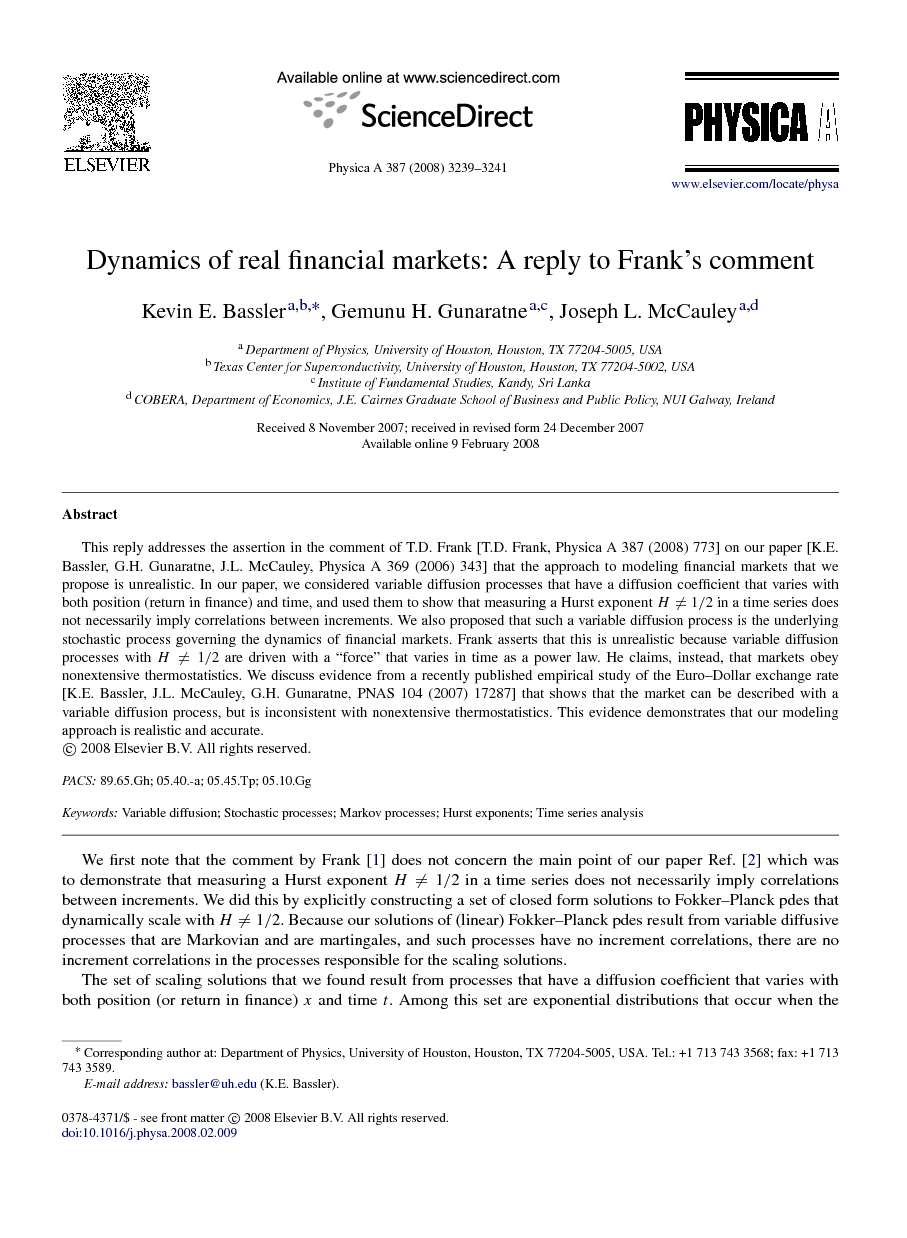 This reply addresses the assertion in the comment of T.D. Frank [T.D. Frank, Physica A 387 (2008) 773] on our paper [K.E. Bassler, G.H. Gunaratne, J.L. McCauley, Physica A 369 (2006) 343] that the approach to modeling financial markets that we propose is unrealistic. In our paper, we considered variable diffusion processes that have a diffusion coefficient that varies with both position (return in finance) and time, and used them to show that measuring a Hurst exponent H≠1/2H≠1/2 in a time series does not necessarily imply correlations between increments. We also proposed that such a variable diffusion process is the underlying stochastic process governing the dynamics of financial markets. Frank asserts that this is unrealistic because variable diffusion processes with H≠1/2H≠1/2 are driven with a “force” that varies in time as a power law. He claims, instead, that markets obey nonextensive thermostatistics. We discuss evidence from a recently published empirical study of the Euro–Dollar exchange rate [K.E. Bassler, J.L. McCauley, G.H. Gunaratne, PNAS 104 (2007) 17287] that shows that the market can be described with a variable diffusion process, but is inconsistent with nonextensive thermostatistics. This evidence demonstrates that our modeling approach is realistic and accurate.

We first note that the comment by Frank [1] does not concern the main point of our paper Ref. [2] which was to demonstrate that measuring a Hurst exponent H≠1/2H≠1/2 in a time series does not necessarily imply correlations between increments. We did this by explicitly constructing a set of closed form solutions to Fokker–Planck pdes that dynamically scale with H≠1/2H≠1/2. Because our solutions of (linear) Fokker–Planck pdes result from variable diffusive processes that are Markovian and are martingales, and such processes have no increment correlations, there are no increment correlations in the processes responsible for the scaling solutions. The set of scaling solutions that we found result from processes that have a diffusion coefficient that varies with both position (or return in finance) xx and time tt. Among this set are exponential distributions that occur when the coefficient is piecewise linear in u=x/tHu=x/tH, and Student tt distributions that occur when the coefficient is quadratic in uu. As an ancillary result we noted that the Tsallis distribution is one member of this large class and therefore concluded that a Markovian dynamical process can produce a Tsallis distribution and have no increment correlations. Such a dynamical process is defined through a corresponding linear Langevin equation. Frank’s comment concerns our proof that the Tsallis distribution can result from a dynamics defined by a linear Langevin equation. He notes that it is possible that other dynamical processes can also produce the Tsallis distribution. We agree that this is possible. As we and others have pointed out, Refs. [3], [4], [5], [6] and [7], a one-point density, such as the Tsallis distribution, does not uniquely define an underlying stochastic process. Nevertheless, as we explicitly demonstrated, the Tsallis distribution can result from a Markovian variable diffusion processes. Frank goes on to assert that the variable diffusion processes that we consider cannot describe the dynamics of real financial markets. We disagree, and empirical evidence supports our approach to modeling financial markets. He claims that our approach is unrealistic because the dynamical processes that we consider have a diffusion coefficient that depends explicitly on a factor of t2H−1t2H−1, and therefore that the stochastic noise driving the system depends on a factor of tH−1/2tH−1/2. (Actually, Frank incorrectly states that the diffusion process is driven by a “force” that increases with time like tmtm, where mm is a real number. The diffusion coefficient of the processes that we consider is of the form D(x,t)=t2H−1D(u)D(x,t)=t2H−1D(u), which, because uu is a function of tt, is not necessarily proportional to t2H−1t2H−1, nor is it necessarily increasing with time.) Instead, he claims that real markets are autonomous systems that obey nonextensive thermostatistics. However, Frank concedes that “Financial systems might be subjected to external driving forces related to calendar effects and seasonal effects”. This sort of time-periodic effect is precisely what we recently found in a detailed empirical study of the Euro–Dollar exchange rate during 1999–2004 [8]. We found that the rate obeys the same time-dependent stochastic process each day. This process has nonstationary increments of price returns. That is, the increment distribution depends on the time of day. In fact, the standard deviation of the return increments varies by more than a factor of 3 during the day. Similar observations have previously been made for price increments in a foreign exchange rate [9]. Furthermore, we found that there are several intervals during the day in which the return increment distribution scales in time as a power law. The exponent describing the power law scaling is different in each interval. In some cases, the size of the increment distribution increases with time, while in other cases it decreases with time. When the increments are nonstationary H≠1/2H≠1/2; H>1/2H>1/2 when the increment distribution is increasing in size, and H<1/2H<1/2 when it is decreasing in size. We also measured the return distribution during the longest of these scaling intervals and found that it has a nearly exponential form. These empirical findings are inconsistent with nonextensive thermostatistics. In particular, the exponential return distribution that is found does not have power law tails, as the Tsallis distribution does. In fact, we found that power law tails in distributions can appear spuriously when statistical analyses are done using sliding interval methods that ignore the existence of nonstationary increments. These empirical findings, however, are completely consistent with the idea that a variable diffusion process is the underlying stochastic process governing the dynamics of the Euro–Dollar exchange during each of the scaling intervals. Variable diffusion processes also explain other well known features of market behavior, including clustering of volatility [10]. Our modeling approach is therefore not only realistic, but accurate.