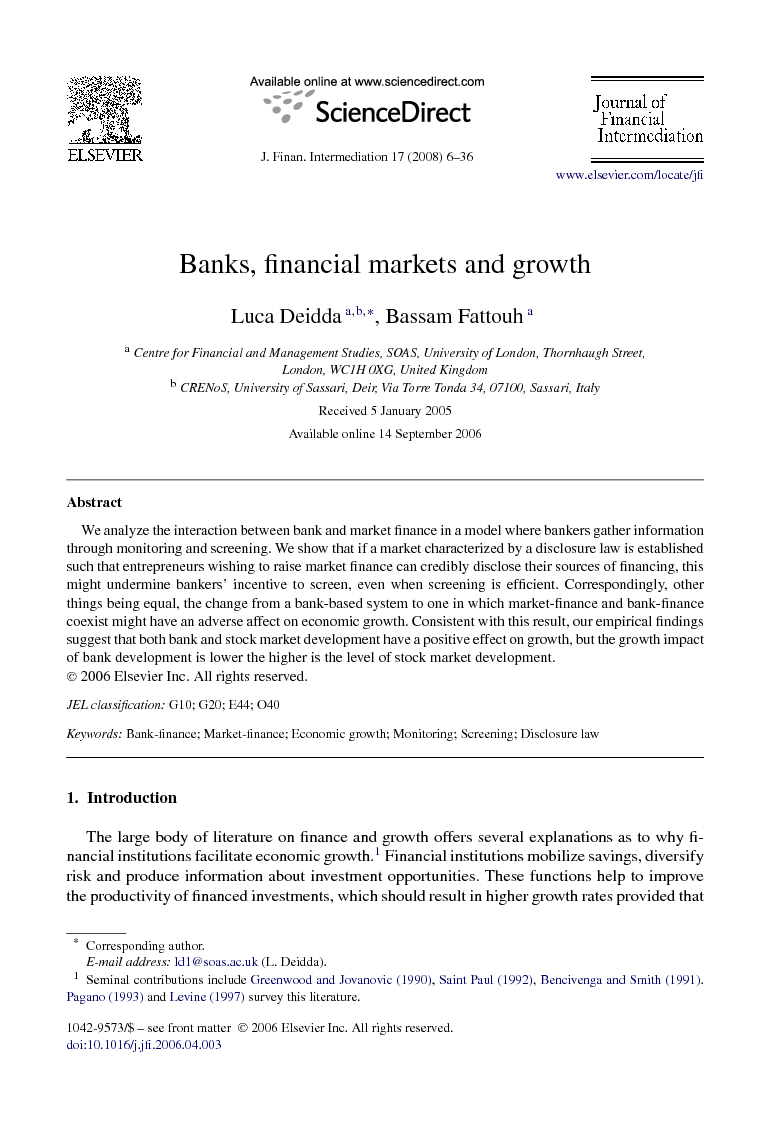 We analyze the interaction between bank and market finance in a model where bankers gather information through monitoring and screening. We show that if a market characterized by a disclosure law is established such that entrepreneurs wishing to raise market finance can credibly disclose their sources of financing, this might undermine bankers' incentive to screen, even when screening is efficient. Correspondingly, other things being equal, the change from a bank-based system to one in which market-finance and bank-finance coexist might have an adverse affect on economic growth. Consistent with this result, our empirical findings suggest that both bank and stock market development have a positive effect on growth, but the growth impact of bank development is lower the higher is the level of stock market development.

Although the growth-finance nexus has been heavily researched both at the theoretical and empirical level, the study of the relationship between financial structure and long-run economic growth has so far received much less attention. This paper analyzes the interaction between market and bank-finance in the context of a model characterized by imperfect information about the quality of investments and moral hazard. We show that the establishment of a financial market where entrepreneurs wishing to raise finance are subject to disclosure law regarding their capital structure might undermine financial institutions' incentive to screen, even when screening would have been efficient. Using this result we also show that the change from a bank-based financial system to a system in which market-finance and bank-finance coexist may impact long-run growth. This is contrary to the view which claims that higher financial development, regardless of its source, is always beneficial for economic growth. Using Demirguc-Kunt and Levine (2001) cross-country data set and modifying the standard growth regression to include an interaction between stock market and bank development, we find evidence which is consistent with our model. Specifically, we find a significant negative interaction effect, implying that at higher levels of stock market development, the contribution of bank development to long-run growth becomes less positive. These results offer a new perspective on the ‘financial structure and growth’ debate. They also have important policy implications, especially for developing and emerging countries which in the last two decades have aimed at introducing and/or reforming their stock markets, with varying degrees of success. If competition from the stock market undermines the role of bank and leads to disintermediation, then efforts directed at establishing a stock-market based system may not achieve its intended objectives.