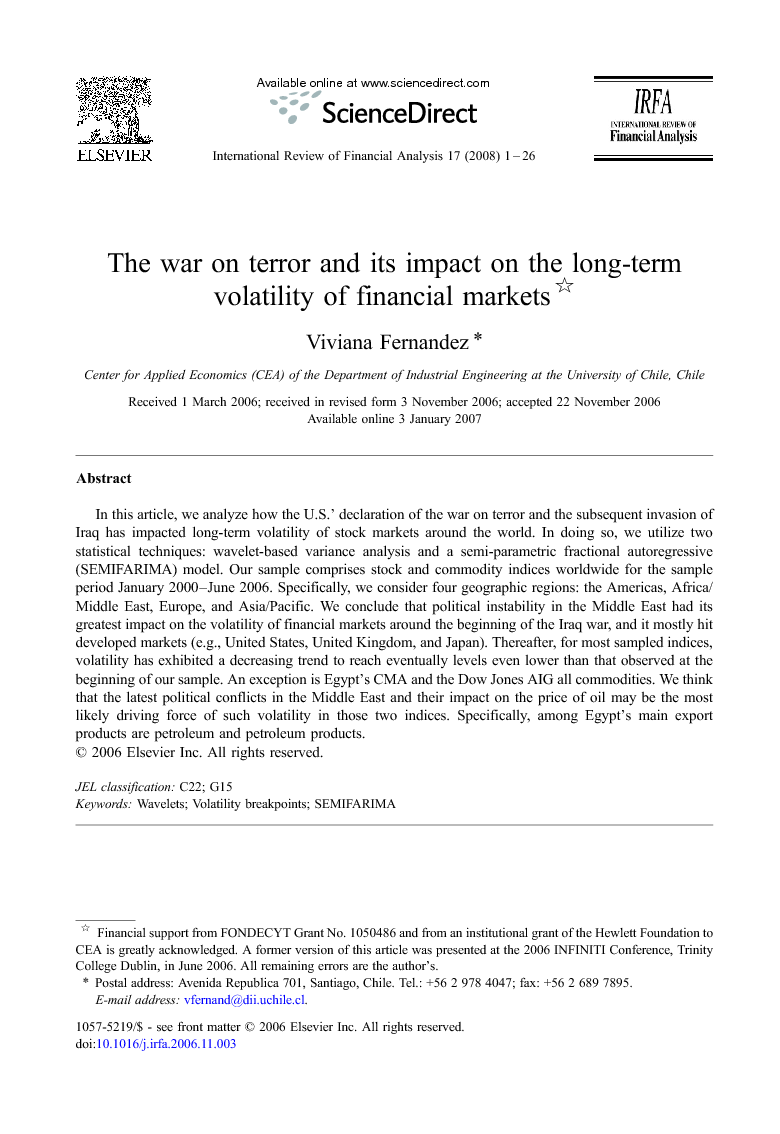 In this article, we analyze how the U.S.' declaration of the war on terror and the subsequent invasion of Iraq has impacted long-term volatility of stock markets around the world. In doing so, we utilize two statistical techniques: wavelet-based variance analysis and a semi-parametric fractional autoregressive (SEMIFARIMA) model. Our sample comprises stock and commodity indices worldwide for the sample period January 2000–June 2006. Specifically, we consider four geographic regions: the Americas, Africa/Middle East, Europe, and Asia/Pacific. We conclude that political instability in the Middle East had its greatest impact on the volatility of financial markets around the beginning of the Iraq war, and it mostly hit developed markets (e.g., United States, United Kingdom, and Japan). Thereafter, for most sampled indices, volatility has exhibited a decreasing trend to reach eventually levels even lower than that observed at the beginning of our sample. An exception is Egypt's CMA and the Dow Jones AIG all commodities. We think that the latest political conflicts in the Middle East and their impact on the price of oil may be the most likely driving force of such volatility in those two indices. Specifically, among Egypt's main export products are petroleum and petroleum products.

In this article, we have focused on the impact of the political instability in the Middle East, following the invasion of Iraq, on the volatility of financial markets worldwide. To that end, we use two different statistical tools to identify firstly the presence of unconditional volatility shifts, and to quantify secondly the extent to which the level of volatility has changed over time. Specifically, we resort to wavelet-variance analysis and to a semi-parametric fractional autoregressive (SEMIFAR) model. The latter is fitted to a volatility estimate proposed by Garman and Klass. Our empirical analysis can be summarized as follows. We first test for variance homogeneity in the raw returns series and the standardized residuals obtained from two filter procedures. The first filter is an AR(1)-GARCH(1,1) model, which controls for conditional heteroskedasticity and inertia in the return series. The second filter is an AR(1)-FIEGARCH(1,1), which also allows for the presence of long memory and asymmetric effects in volatility. As reported in previous studies, by filtering the data, the null hypothesis of variance homogeneity tends to be accepted quite more often than otherwise. That implies that in most cases there are no permanent variance shifts but primarily volatility clustering (i.e., correlated conditional heteroskedasticity). After testing for the presence of unconditional variance shifts, we concentrate on those indices that show evidence of the existence of such breaks, even after filtering the raw returns. In doing so, we compute a rolling wavelet-variance estimate, which enables us to see how volatility has evolved over time at the different scales of the data. We also analyze the behavior of the trend component of volatility by using a SEMIFAR model. We conclude that volatility worldwide has primarily experienced transitory increments during 2000–June 2006, which can be primarily associated with volatility clustering. In addition, we do not observe in general more volatile financial markets than at the beginning of 2000.