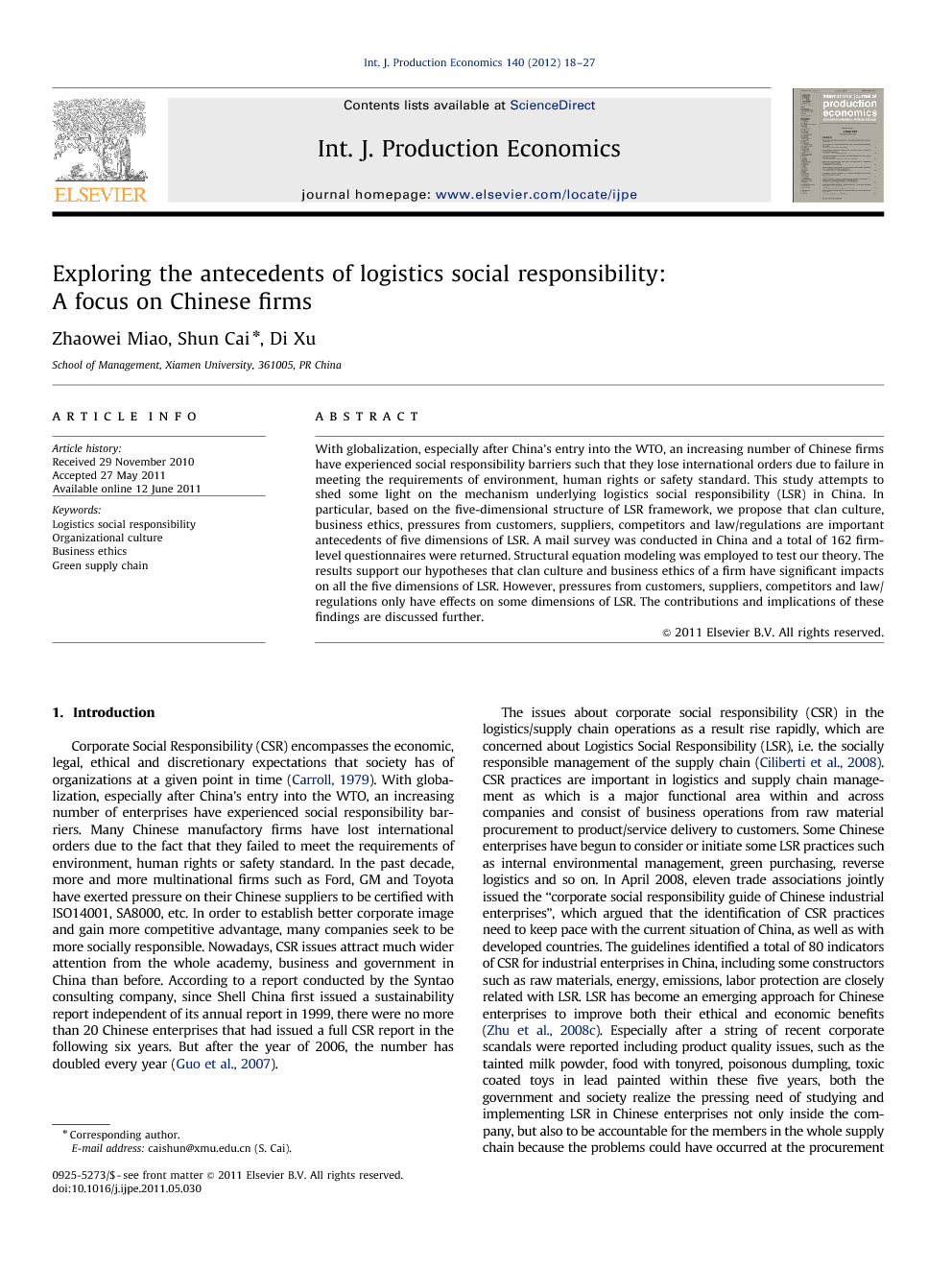 With globalization, especially after China's entry into the WTO, an increasing number of Chinese firms have experienced social responsibility barriers such that they lose international orders due to failure in meeting the requirements of environment, human rights or safety standard. This study attempts to shed some light on the mechanism underlying logistics social responsibility (LSR) in China. In particular, based on the five-dimensional structure of LSR framework, we propose that clan culture, business ethics, pressures from customers, suppliers, competitors and law/regulations are important antecedents of five dimensions of LSR. A mail survey was conducted in China and a total of 162 firm-level questionnaires were returned. Structural equation modeling was employed to test our theory. The results support our hypotheses that clan culture and business ethics of a firm have significant impacts on all the five dimensions of LSR. However, pressures from customers, suppliers, competitors and law/regulations only have effects on some dimensions of LSR. The contributions and implications of these findings are discussed further.

Corporate Social Responsibility (CSR) encompasses the economic, legal, ethical and discretionary expectations that society has of organizations at a given point in time (Carroll, 1979). With globalization, especially after China's entry into the WTO, an increasing number of enterprises have experienced social responsibility barriers. Many Chinese manufactory firms have lost international orders due to the fact that they failed to meet the requirements of environment, human rights or safety standard. In the past decade, more and more multinational firms such as Ford, GM and Toyota have exerted pressure on their Chinese suppliers to be certified with ISO14001, SA8000, etc. In order to establish better corporate image and gain more competitive advantage, many companies seek to be more socially responsible. Nowadays, CSR issues attract much wider attention from the whole academy, business and government in China than before. According to a report conducted by the Syntao consulting company, since Shell China first issued a sustainability report independent of its annual report in 1999, there were no more than 20 Chinese enterprises that had issued a full CSR report in the following six years. But after the year of 2006, the number has doubled every year (Guo et al., 2007). The issues about corporate social responsibility (CSR) in the logistics/supply chain operations as a result rise rapidly, which are concerned about Logistics Social Responsibility (LSR), i.e. the socially responsible management of the supply chain (Ciliberti et al., 2008). CSR practices are important in logistics and supply chain management as which is a major functional area within and across companies and consist of business operations from raw material procurement to product/service delivery to customers. Some Chinese enterprises have begun to consider or initiate some LSR practices such as internal environmental management, green purchasing, reverse logistics and so on. In April 2008, eleven trade associations jointly issued the “corporate social responsibility guide of Chinese industrial enterprises”, which argued that the identification of CSR practices need to keep pace with the current situation of China, as well as with developed countries. The guidelines identified a total of 80 indicators of CSR for industrial enterprises in China, including some constructors such as raw materials, energy, emissions, labor protection are closely related with LSR. LSR has become an emerging approach for Chinese enterprises to improve both their ethical and economic benefits (Zhu et al., 2008c). Especially after a string of recent corporate scandals were reported including product quality issues, such as the tainted milk powder, food with tonyred, poisonous dumpling, toxic coated toys in lead painted within these five years, both the government and society realize the pressing need of studying and implementing LSR in Chinese enterprises not only inside the company, but also to be accountable for the members in the whole supply chain because the problems could have occurred at the procurement process, production process at subcontractors, or at the stage of transportation/delivery (Miao et al., 2010). Some studies show that Asia will be a majority of the world's manufacturing center in the next couple of decades, which will bring about substantial environmental burdens (Rao, 2002), especially for China because the Chinese economy presents a large portion of this growth. Recently, more and more studies take into consideration Green Supply Chain Management (GSCM) (e.g. Ferretti et al., 2007, Kainuma and Tawara, 2006, Sundarakani et al., 2010, Zhu and Sarkis, 2006, Zhu et al., 2008a and Zhu et al., 2008b), which is one aspect of LSR practices. One interesting topic in this area is exploring the drivers/pressures of GSCM in China, because compared with companies in western developed countries. Chinese companies have quite different corporate culture and ways of running business. Zhu and Sarkis (2006) studied the drivers/pressures for implementation of GSCM practices such as regulations, marketing, suppliers, competitors and so on, in Chinese enterprises in different industrial sectors. However, there are few literatures to work on the issues of LSR in China, especially the drivers/pressures for implementation of LSR. In this paper, we describe the results of our survey from 162 Chinese companies.

In conclusion, this study sought to improve our understanding of the mechanisms underlying logistics social responsibility. By blending the findings with the extant literature, we take a step toward achieving this goal. In particular, clan culture, business ethics, pressures from suppliers, customers, competitors and law/regulations were identified as key factors, which significantly affect the logistics social responsibility of a firm. The theoretical implication of this study is multi-fold. First, we confirm the five-dimensional structure of logistics social responsibility (LSR), and our study is one of the few empirical studies building on such a framework. Differs from many prior research, which treats LSR as a single construct, we investigates the effects from antecedents on each of the dimensions of the LSR. Second, we identify clan culture and business ethics as key factors influencing LSR, which is of particular importance because cultural aspects could play a significant role when a firm pursues LSR. Third, our data analyses show that pressures from suppliers, customers, competitors and law/regulations have certain effects on LSR. More specifically, although this set of antecedents have been identified in several prior studies, we investigate their differentiated effects on different dimensions of LSR. Finally and most importantly, a large number of prior research findings are gained through observations of firm practices in western countries, our studies provides observations and analyses on Chinese firms, which enables cross-country and cross-culture comparisons of the literature. Our study also provides some managerial implications for stakeholders of a firm and policy makers. From a stakeholder perspective, our findings suggest that for a firm to do well in LSR, building a clan culture and good business ethics could be important approaches, and very often, those approaches could be much helpful than react to external pressures in a passive way. From a policy maker perspective, our study offers insights on the limitations of current regulations, and on how to formulate appropriate policies and regulations to encourage firms to be more socially responsible in logistics activities.