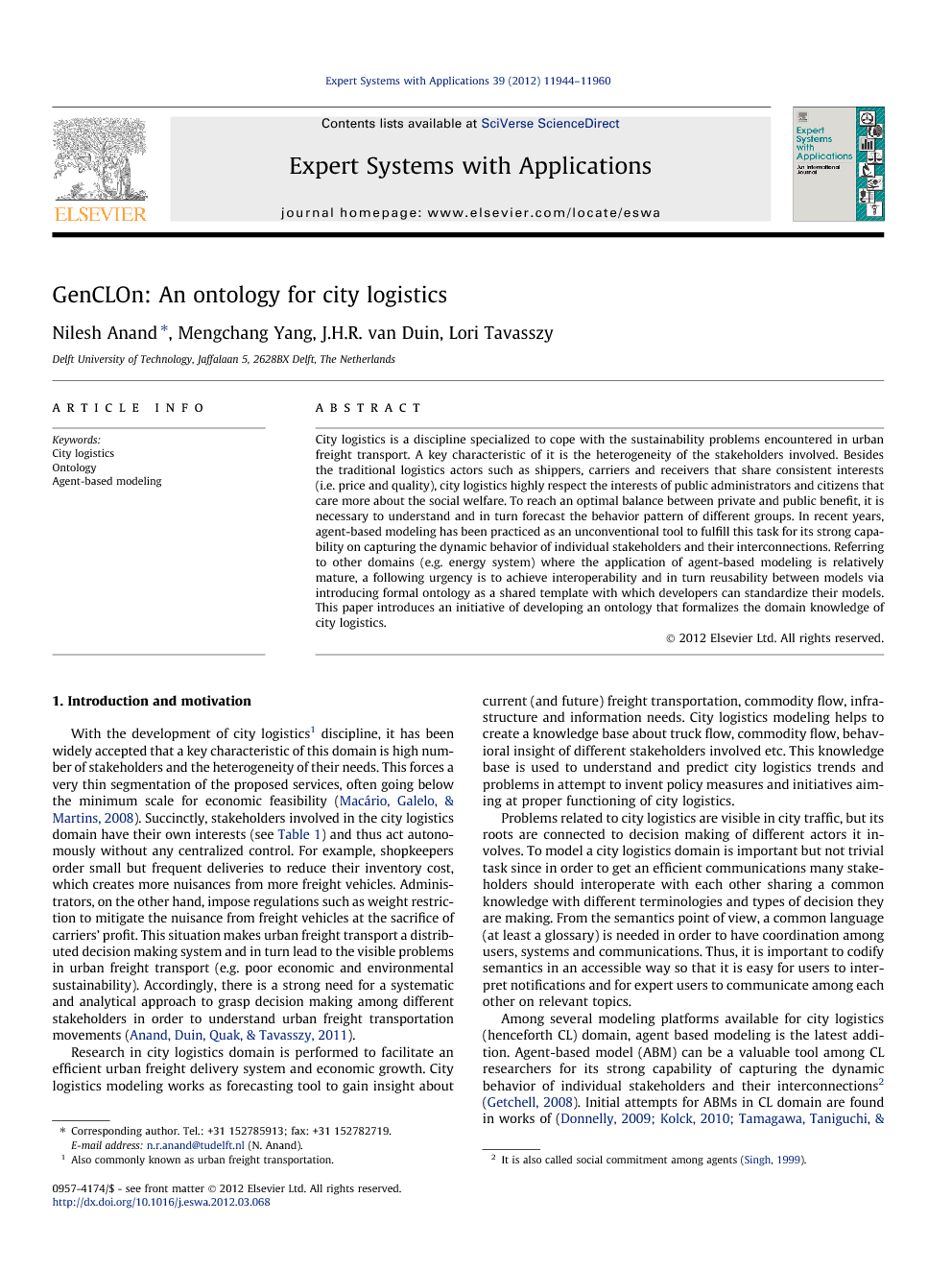 City logistics is a discipline specialized to cope with the sustainability problems encountered in urban freight transport. A key characteristic of it is the heterogeneity of the stakeholders involved. Besides the traditional logistics actors such as shippers, carriers and receivers that share consistent interests (i.e. price and quality), city logistics highly respect the interests of public administrators and citizens that care more about the social welfare. To reach an optimal balance between private and public benefit, it is necessary to understand and in turn forecast the behavior pattern of different groups. In recent years, agent-based modeling has been practiced as an unconventional tool to fulfill this task for its strong capability on capturing the dynamic behavior of individual stakeholders and their interconnections. Referring to other domains (e.g. energy system) where the application of agent-based modeling is relatively mature, a following urgency is to achieve interoperability and in turn reusability between models via introducing formal ontology as a shared template with which developers can standardize their models. This paper introduces an initiative of developing an ontology that formalizes the domain knowledge of city logistics.

With the development of city logistics1 discipline, it has been widely accepted that a key characteristic of this domain is high number of stakeholders and the heterogeneity of their needs. This forces a very thin segmentation of the proposed services, often going below the minimum scale for economic feasibility (Macário, Galelo, & Martins, 2008). Succinctly, stakeholders involved in the city logistics domain have their own interests (see Table 1) and thus act autonomously without any centralized control. For example, shopkeepers order small but frequent deliveries to reduce their inventory cost, which creates more nuisances from more freight vehicles. Administrators, on the other hand, impose regulations such as weight restriction to mitigate the nuisance from freight vehicles at the sacrifice of carriers’ profit. This situation makes urban freight transport a distributed decision making system and in turn lead to the visible problems in urban freight transport (e.g. poor economic and environmental sustainability). Accordingly, there is a strong need for a systematic and analytical approach to grasp decision making among different stakeholders in order to understand urban freight transportation movements (Anand, Duin, Quak, & Tavasszy, 2011).

Research in city logistics domain is performed to facilitate an efficient urban freight delivery system and economic growth. City logistics modeling works as forecasting tool to gain insight about current (and future) freight transportation, commodity flow, infrastructure and information needs. City logistics modeling helps to create a knowledge base about truck flow, commodity flow, behavioral insight of different stakeholders involved etc. This knowledge base is used to understand and predict city logistics trends and problems in attempt to invent policy measures and initiatives aiming at proper functioning of city logistics. Problems related to city logistics are visible in city traffic, but its roots are connected to decision making of different actors it involves. To model a city logistics domain is important but not trivial task since in order to get an efficient communications many stakeholders should interoperate with each other sharing a common knowledge with different terminologies and types of decision they are making. From the semantics point of view, a common language (at least a glossary) is needed in order to have coordination among users, systems and communications. Thus, it is important to codify semantics in an accessible way so that it is easy for users to interpret notifications and for expert users to communicate among each other on relevant topics. Among several modeling platforms available for city logistics (henceforth CL) domain, agent based modeling is the latest addition. Agent-based model (ABM) can be a valuable tool among CL researchers for its strong capability of capturing the dynamic behavior of individual stakeholders and their interconnections2 (Getchell, 2008). Initial attempts for ABMs in CL domain are found in works of (Donnelly, 2009, Kolck, 2010 and Tamagawa et al., 2010). These models are developed to evaluate the potential impact of different policy measures in CL domain. ABM is a powerful tool, nevertheless the human effort required to develop an ABM tends to be huge, especially when multiple stakeholders have to be covered (Tamagawa et al., 2010). An ABM has to be constructed upon a knowledge base (Le Ber & Chouvet, 1999) which abstracts a specific domain into a world purely composed of agents and their relationships. However, today, this kind of knowledge bases are still built with little sharing or reuse – almost each one starts from a blank slate. ABM developers have to go to (abundant) literatures and data, seek the terms of interest, sort the complex, and usually implicit relations among terms, and code the agents together with their properties (i.e. behavioral rules and communication protocols) merely on the basis of what they subjectively learn without a shared reference. This situation directly leads to a poor reusability of models that ultimately incurs repetitive work and extra developing time. For instance, a developer wants to add a new agent to her model and is informed that there exist some models containing this agent. Unfortunately, after checking the models of interest, she finds that agents in these models are coded in a different way which is non-compatible/inconsistent with her model. Helplessly, she has to spend significant amount of time on coding the agent herself. In this situation, it is imaginable that how easier the life would be if there is a shared knowledge base using which ABM developers can standardize their models and consequently reach interoperability. Fortunately, the introduction of the CL ontology can change, or at least improve, this situation. The term ‘ontology’ was coined by Aristotle as a branch of metaphysics, and is the study of ‘the nature and structure of reality’. According to (Gruber, 2008), the traditional goal of ontological inquiry is to ‘divide the world at its joints, to discover those fundamental categories, or kinds, into which the world’s objects naturally fall’. Since the mid-1970s, researcher have been recognizing the great value of ontology for capturing knowledge, which is regarded as the key to building large and powerful Artificial Intelligence (AI) system. In the 1980s, the AI community began to use the term ontology to refer to both a theory of a modeled world and a component of knowledge systems. In the early 1990s, (Gruber, 1995) further defined ontology into a technical term in computer science as ‘a specification of a conceptualization’. That is ‘an ontology is a description (like a formal specification of a program) of the concepts and relationships that can exist for an agent or a community of agents’. In other words, ontology stipulates the potential agents and their rules of interaction in a given domain. Following this discussion, it’s conceivable that a CL ontology can abstract the CL domain into multiple concepts/classes. Some of these classes can directly be adopted as agents in the models, and their potential interactions have already been formally clarified in the ontology. Hence, CL-ABM developers can have a shared and standardized template that specifies the data structure and initial data used within their models. Rather than building from scratch, they are able to assemble their knowledge bases with components drawn from the ontology. Furthermore, specific agents in an existing model can be directly reused in other models as long as their developers follow the same ontology (Keirstead & van Dam, 2010). All of these merits should greatly decrease development time while improving the robustness and reliability of the resulting knowledge bases. An intuitive problem forming mechanism is given in Fig. 1. The remainder of the paper is organized as follows. In Section 2 we present literature review. In the Section 3, we conceptualize the CL domain and reveal the scope of CL ontology. In the next section – Section 4 – we start defining CL ontology with its main classes/concepts that is followed by CL ontology axioms and relationships in Section 5. Section 6 describes the validation of CL ontology using data driven approach. Section 7 illustrates applications of CL ontology and in Section 8 conclusions is presented.