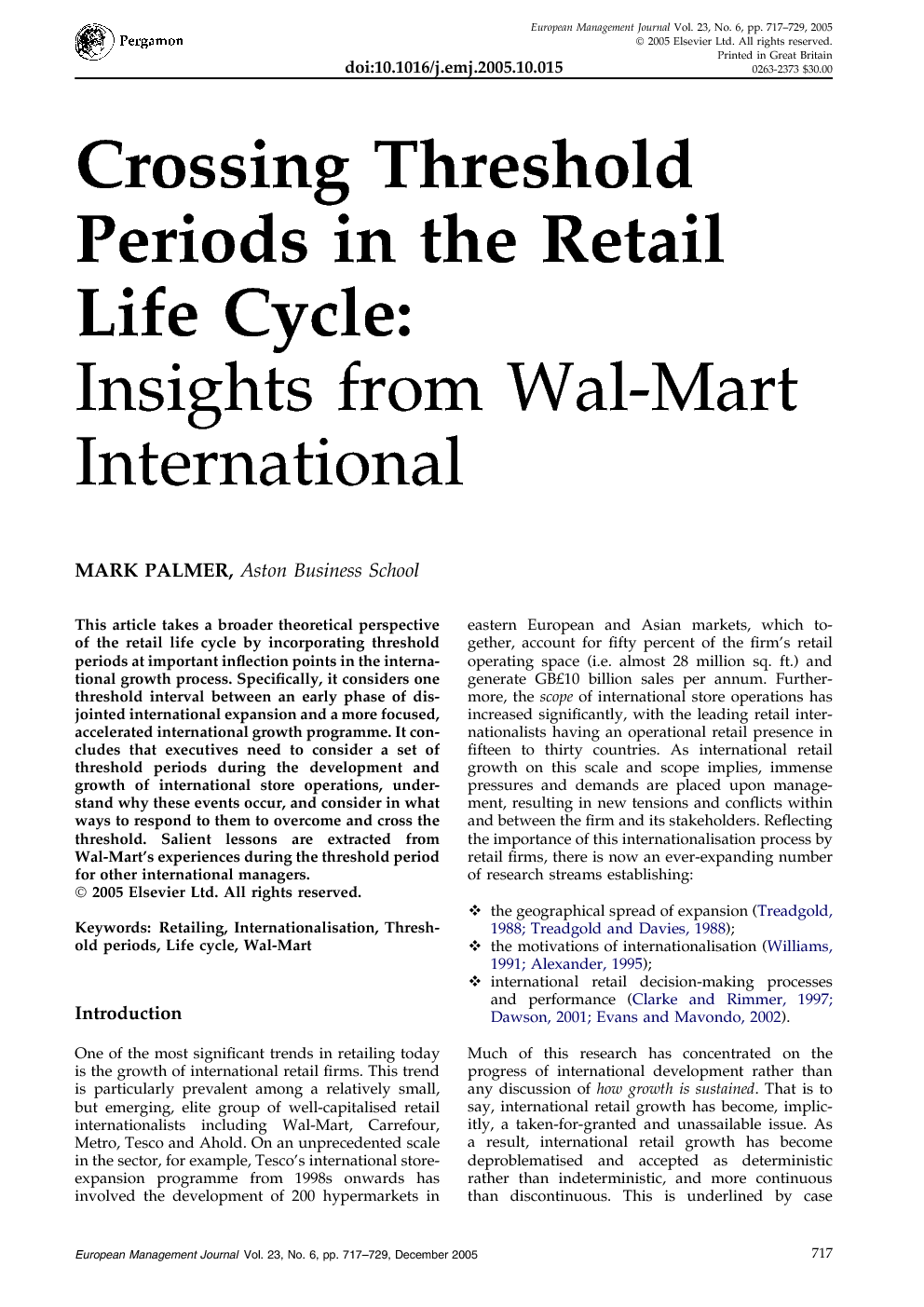 One of the most significant trends in retailing today is the growth of international retail firms. This trend is particularly prevalent among a relatively small, but emerging, elite group of well-capitalised retail internationalists including Wal-Mart, Carrefour, Metro, Tesco and Ahold. On an unprecedented scale in the sector, for example, Tesco’s international store-expansion programme from 1998s onwards has involved the development of 200 hypermarkets in eastern European and Asian markets, which together, account for fifty percent of the firm’s retail operating space (i.e. almost 28 million sq. ft.) and generate GB£10 billion sales per annum. Furthermore, the scope of international store operations has increased significantly, with the leading retail internationalists having an operational retail presence in fifteen to thirty countries. As international retail growth on this scale and scope implies, immense pressures and demands are placed upon management, resulting in new tensions and conflicts within and between the firm and its stakeholders. Reflecting the importance of this internationalisation process by retail firms, there is now an ever-expanding number of research streams establishing: ❖ the geographical spread of expansion (Treadgold, 1988 and Treadgold and Davies, 1988); ❖ the motivations of internationalisation (Williams, 1991 and Alexander, 1995); ❖ international retail decision-making processes and performance (Clarke and Rimmer, 1997, Dawson, 2001 and Evans and Mavondo, 2002). Much of this research has concentrated on the progress of international development rather than any discussion of how growth is sustained. That is to say, international retail growth has become, implicitly, a taken-for-granted and unassailable issue. As a result, international retail growth has become deproblematised and accepted as deterministic rather than indeterministic, and more continuous than discontinuous. This is underlined by case studies of the retail internationalisation process. For example, almost all the studies on Wal-Mart have been written as though Wal-Mart’s corporate development and growth has been immune from the internal pains of organisational growth (see Evans and Barbiero, 1999 and Arnold and Fernie, 2000). Various explanations have been put forward in the broader management literature on the corporate growth process. None more prominent than the concept of the life cycle which has been used to identify the number of stages of development, and the characteristics of organisations that exist at the different stages (Quinn and Cameron, 1983). Research or conceptual work on how firms actually proceed from one stage to another – what Greiner (1972) calls the ‘revolution’ and Miller and Friesen (1984) refer to as the ‘highly multifaceted transition’ process is much less understood, particularly in relation to the retail internationalisation process. Another more recent study re-emphasised the importance of understanding these ‘turning points’ in growth, not least of which are the (unintended) consequences associated with premature withdrawal or excessive investments during different stages (Golder and Tellis, 2004). One approach towards an understanding of international retail growth is to integrate the theory of threshold periods into the theory of the retail life cycle. Applying this synthesis, there seems to be an opportunity to cast more light on the actual path of expansion and ways in which retail growth unfolds and proceeds from one stage to another. More specifically, this paper concentrates on the inter-stage or transitional pressures before and after the inflection points in the retail firm’s life cycle – an interval which is termed the threshold period. Drawing upon a database of sixty two (n = 62) in-depth interviews with financial analysts, advisors and executives at Wal-Mart, this study examines Wal-Mart’s experiences during a threshold period from the early phase of the international expansion, towards a more focused, accelerated international growth phase. It closely interrogates the events at this threshold period, and how these shape, promote and govern the future trajectory of international growth. The paper will firstly review the corporate life cycle literature, alongside the retail life cycle model. Following on, the paper grounds a discussion of the work of Clifford (1973) on threshold periods within the context of the retail life cycle. The study will then examine a threshold period in the internationalisation process of Wal-Mart. The paper concludes with a discussion and extracts lessons from the threshold period for other international managers. The next section of the paper situates the threshold period within the broader life cycle debate.

The study provides important support for the inclusion of threshold periods in the retail life cycle and, if nothing else, it is a useful reminder that corporate growth is neither assured, nor a straightforward process. As this integrative approach conclusively demonstrates, corporate growth is not only concerned with progression, new opportunities, executive ambition and motivation, but also embodies notions of instability, uncertainty, resistance, unnecessary cost, internal and external legitimacy struggles. Almost inevitably, international expansion will be punctuated by threshold periods and, accordingly, executives need to understand why these events occur, and consider what ways to respond to them to overcome and cross the threshold. The study found support for both internal and external factors playing a significant part in Wal-Mart moving through the threshold period. The transition itself was precipitated by two simultaneous events: intense scrutiny regarding the company’s German operations; and the fact that Kingfisher valued and subsequently bid for Asda in the UK market. Both events provided the opportunity for Wal-Mart’s management to regain legitimacy and control. A number of lessons can be extracted. First, executives must have an awareness of how historical domestic forces shape both the future direction and momentum of the international strategy. In this respect, international success could lie from introspectively interrogating past intra-firm investment decisions in the history of the firm. This also involves accounting for the influence of senior executive succession issues and legacies. Second, corporate growth does not imply international organisational progress. The momentum in growth driven from the Supercenter format in the US market provided the context in which internationalisation had taken ‘a secondary position’ in the Wal-Mart’s corporate development agenda. It suggests that internationalisation can neither be treated as a marginal, nor individualistic or isolated form of activity. Rather it requires senior executives to fully engage with the international retail strategy and vision; integrating it fully into the existing organisational structure. A long delay between international strategy and the development of both an appropriate organisational structure and regional infrastructures will only serve to destabilise the retail operations. Third, it is important to develop an acute sense of the shifting power amongst a revolving constellation of stakeholders at different stages in the firm’s life cycle; otherwise the firm will become embroiled in the legitimacy trap of reassuring others and taking unnecessary reactive measures. Fourth, the way in which Wal-Mart crossed the threshold period was dependent upon change driven by the Chief Executive Officer – Lee Scott. In the preceding case, John Mensor and Lee Scott revived, and would ultimately drive the international strategy forward through the threshold period. Without the direct intervention of the senior change agent, it is questionable whether any retailer will successfully navigate the threshold period and sustain growth in the international operations. Fifth, despite Wal-Mart’s immense success in developing retail capabilities in the US market, its ability to envisage new uses for, or ways of exploiting, such capabilities was fundamental in progressing through the threshold period. Finally, an antecedent condition for the successful entry, transition through, and exit from the threshold period is domestic market stability and control. Turbulent domestic market environments may only serve to detract and drain financial and human (especially senior management) resources from international operations, and undermine the ability to secure international anchor mass, even if critical mass is achieved in markets elsewhere. Consideration of the threshold period during the early phase of international expansion sets this study apart from other retail life cycle models. The study of international retail growth is at a relatively early stage of development and further work is now required. This study considered one specific transitional interval. It is hoped that studies may examine in more depth other threshold periods in the firm’s life cycle in further investigations. A similar threshold lens could be applied to other life cycle models.