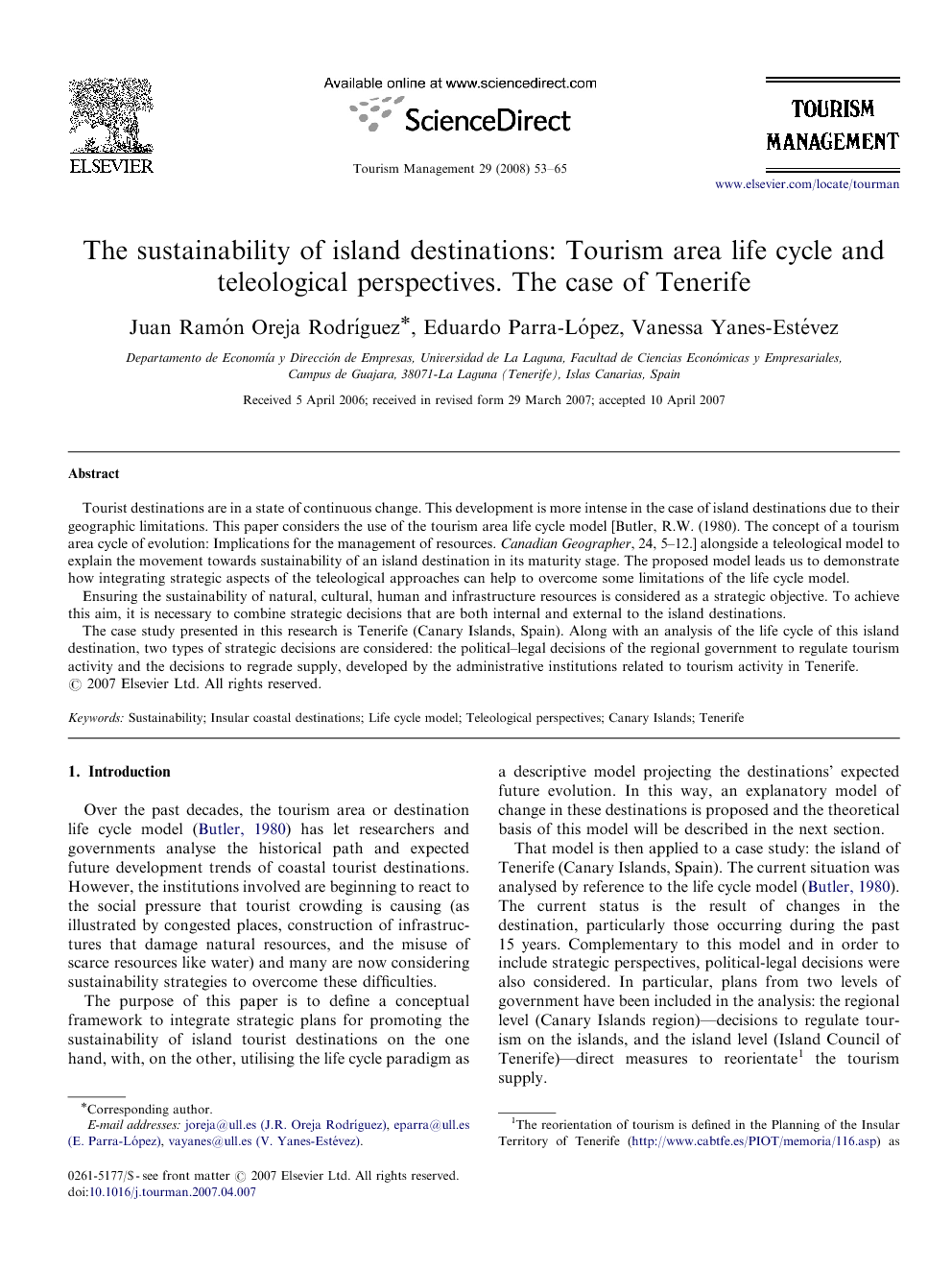 Tourist destinations are in a state of continuous change. This development is more intense in the case of island destinations due to their geographic limitations. This paper considers the use of the tourism area life cycle model [Butler, R.W. (1980). The concept of a tourism area cycle of evolution: Implications for the management of resources. Canadian Geographer, 24, 5–12.] alongside a teleological model to explain the movement towards sustainability of an island destination in its maturity stage. The proposed model leads us to demonstrate how integrating strategic aspects of the teleological approaches can help to overcome some limitations of the life cycle model. Ensuring the sustainability of natural, cultural, human and infrastructure resources is considered as a strategic objective. To achieve this aim, it is necessary to combine strategic decisions that are both internal and external to the island destinations. The case study presented in this research is Tenerife (Canary Islands, Spain). Along with an analysis of the life cycle of this island destination, two types of strategic decisions are considered: the political–legal decisions of the regional government to regulate tourism activity and the decisions to regrade supply, developed by the administrative institutions related to tourism activity in Tenerife.

Over the past decades, the tourism area or destination life cycle model (Butler, 1980) has let researchers and governments analyse the historical path and expected future development trends of coastal tourist destinations. However, the institutions involved are beginning to react to the social pressure that tourist crowding is causing (as illustrated by congested places, construction of infrastructures that damage natural resources, and the misuse of scarce resources like water) and many are now considering sustainability strategies to overcome these difficulties. The purpose of this paper is to define a conceptual framework to integrate strategic plans for promoting the sustainability of island tourist destinations on the one hand, with, on the other, utilising the life cycle paradigm as a descriptive model projecting the destinations’ expected future evolution. In this way, an explanatory model of change in these destinations is proposed and the theoretical basis of this model will be described in the next section. That model is then applied to a case study: the island of Tenerife (Canary Islands, Spain). The current situation was analysed by reference to the life cycle model (Butler, 1980). The current status is the result of changes in the destination, particularly those occurring during the past 15 years. Complementary to this model and in order to include strategic perspectives, political-legal decisions were also considered. In particular, plans from two levels of government have been included in the analysis: the regional level (Canary Islands region)—decisions to regulate tourism on the islands, and the island level (Island Council of Tenerife)—direct measures to reorientate1 the tourism supply.

Efforts to integrate the two perspectives of tourism analysis have been undertaken in this paper. The Tourism Area Life Cycle model with a focus on product, and the Teleological Model with its focus on strategy, have been considered in this study. Both perspectives are synthesised in the model presented (Fig. 1), and represent a strategic integration of key aspects of tourist management in Island Destinations. The Life Cycle model cannot explain the movement towards sustainability that is so commonly sought in many destinations and that is considered as a strategy to overcome stagnation. It is evident; therefore, that sustainability must be explained through a combination of more than one model, as discussed above. The end result of the adoption of sustainability strategies must include measures for the conservation and protection of the environment, as well as land use planning in general. If these strategies are to have a positive impact on the environment, they must incorporate a regulatory framework in relation to the environment. Such moves have not yet been completed in Tenerife although moves in the right direction have been taken, including the law 19/2003 of the Government of the Canary Islands (noted earlier), as well as strategies relating to architectural control. No law can be passed, without the consensus of all those involved, since without such consensus, only fragmentation will result. This is one of the implications, our model emphasised the need to put into practice, not only laws, but to decide the strategic management of the destination bearing in mind the different stakeholders interests and trying to share the same objectives. It seems not easy at all. This review of Tenerife, has allowed us to recognise the relevance of the problems identified in the earlier discussion, that relate to strategic operations in the island, concerned with tourist activity, excess of supply, imbalances in demand, lack of consensus in environmental matters and problems of security. These problems have taken the island to its present phase of stagnation. This is a critical position, and also serves to highlight the necessity to combine sustainability principles within an appropriate framework in order to develop a solid and coherent approach to the management of Island Destinations, in line with the opinions of key authors in this field (Agarwal, 2001; Buhalis, 1999; García Falcón & Medina Muñoz, 1999). Finally, the findings in relation to the Island of Tenerife, can serve as an example for other Insular Destinations, notably in terms of a response to experiencing the later stages of the Life Cycle Model. The Canary Islands are currently focusing their efforts on a strategic response to potential stagnation. Before dealing with sustainability, we must first evaluate the fundamental principles of the future development of each tourist destination (for example, in terms of rural demography, economy, and development potential). This enables an analysis of the interrelationships between the different strategies and the desired objectives, and to measure the negative impacts as well as the positive ones of such responses.