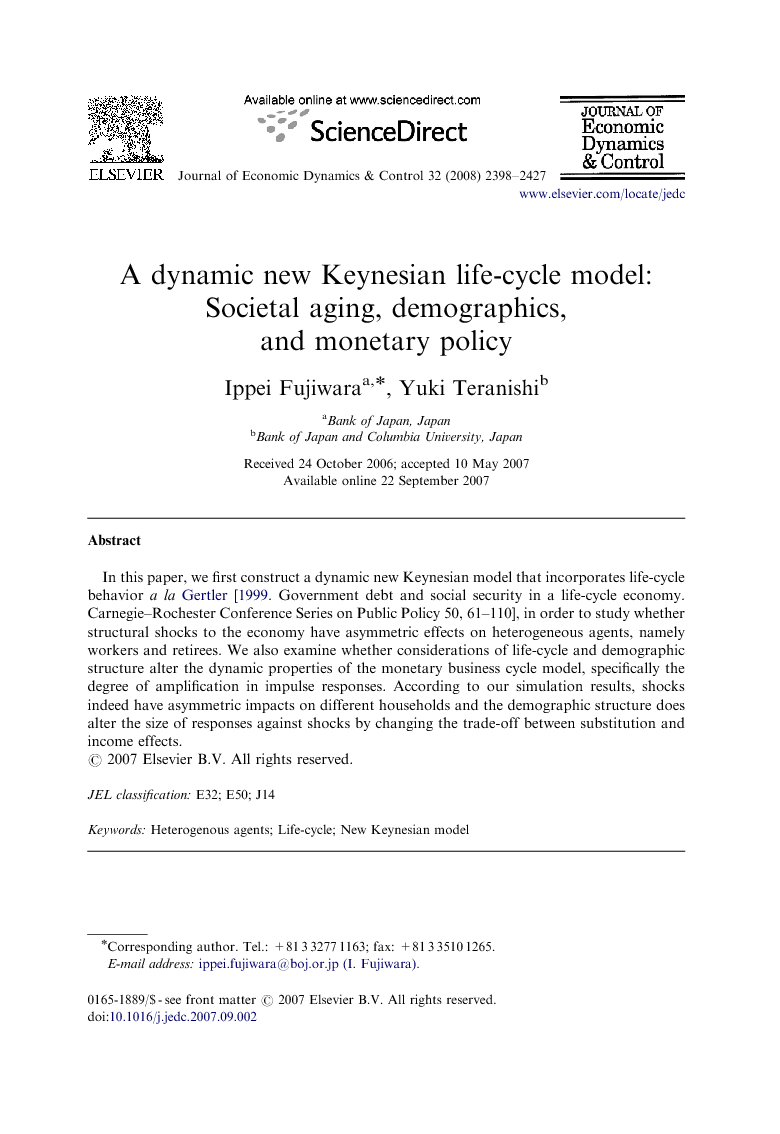 In this paper, we first construct a dynamic new Keynesian model that incorporates life-cycle behavior a laGertler [1999. Government debt and social security in a life-cycle economy. Carnegie–Rochester Conference Series on Public Policy 50, 61–110], in order to study whether structural shocks to the economy have asymmetric effects on heterogeneous agents, namely workers and retirees. We also examine whether considerations of life-cycle and demographic structure alter the dynamic properties of the monetary business cycle model, specifically the degree of amplification in impulse responses. According to our simulation results, shocks indeed have asymmetric impacts on different households and the demographic structure does alter the size of responses against shocks by changing the trade-off between substitution and income effects.

In this paper, we construct a dynamic new Keynesian life-cycle model based on Gertler (1999). We show that it is of great importance for a central bank to consider the demographics for sound monetary policy. First, the natural rate of interest differs as demographics change. Second, the structural shocks to the economy have asymmetric effects on heterogeneous agents, namely workers and retirees. Differences in the labor productivity between workers and retirees make a positive technology shock enhance the worker's but decrease the retiree's welfare. Furthermore, due to the higher reliance on financial assets, retirees become better off with a positive shock on nominal interest rates. This, especially, implies that a central bank may face a severe policy trade-off. If the central bank cares more about retirees, or if monetary policy is determined mainly through opinions of older people because of their bargaining power in politics over younger people, there may be a bias towards higher nominal interest rates. Yet, even though societal aging deepens, in aggregate, a tightening monetary policy shock still has negative impacts on the aggregate demand since worker's consumption or the investment need to be lowered while consumption of retirees increase. Finally, the demographic structure changes the dynamic properties of the solution, namely the degree of amplification in the impulse responses. The less retirees work under stationary population, the less volatile macroeconomic variables are against shocks. Under such circumstances, a positive technology shock does not increase retiree's labor supply and so the negative effects from a positive monetary policy shock are alleviated by an increase in retiree's consumption. In particular, the latter two points are very relevant to the recent economy developments in Japan, where the total population is expected to start decreasing and baby boomers are to retire en masse around 2007. Depending on whether retirees continue to work or not, macroeconomic responses to shocks could be dramatically changed in the foreseeable future. Not only could the effects unanticipated changes in monetary policy change but also a positive monetary policy shock may even temporarily increase output and inflation. Acknowledgments Previously circulated under the title: ‘Monetary Policy in a Life-Cycle Economy: Distributional Consequences of Monetary Policy Rule.’ We thank Martin Bodenstein, Dale Henderson, Keisuke Otsu, Laura Piscitelli, Antti Ripatti, Masashi Saito and three anonymous referees for invaluable inputs and have benefited from discussions with Stefania Albanesi, Kosuke Aoki, David Aikman, David Backus, Tamin Bayoumi, Toni Braun, Larry Christiano, Shigeru Fujita, Mark Gertler, Marc Giannoni, Fumio Hayashi, Michel Juillard, Nobuhiro Kiyotaki, Gian Maria Milessi-Ferretti, Toshi Sekine, Justin Svec, Lars Svensson, Mike Woodford, Tack Yun and Feng Zhu. We also thank participants at the BIS workshop, the BOC seminar, the BOJ-IMES seminar, the Columbia University macro colloquium, the macro workshop at the University of Tokyo, Central Bank Workshop on Macroeconomic Modeling at the Reserve Bank of South Africa, and the conference: ‘DSGE Modeling in Policy Making Institutions: Progress and Prospects’ organized by the ECB, the FRB, the IMF, the Georgetown University, the Goethe University and the Journal of Economic, Dynamics and Control at the FRB. The views expressed in this paper should not be taken to be those of the Bank of Japan nor any of its respective monetary policy or other decision making bodies. Any errors are solely the responsibility of the authors.