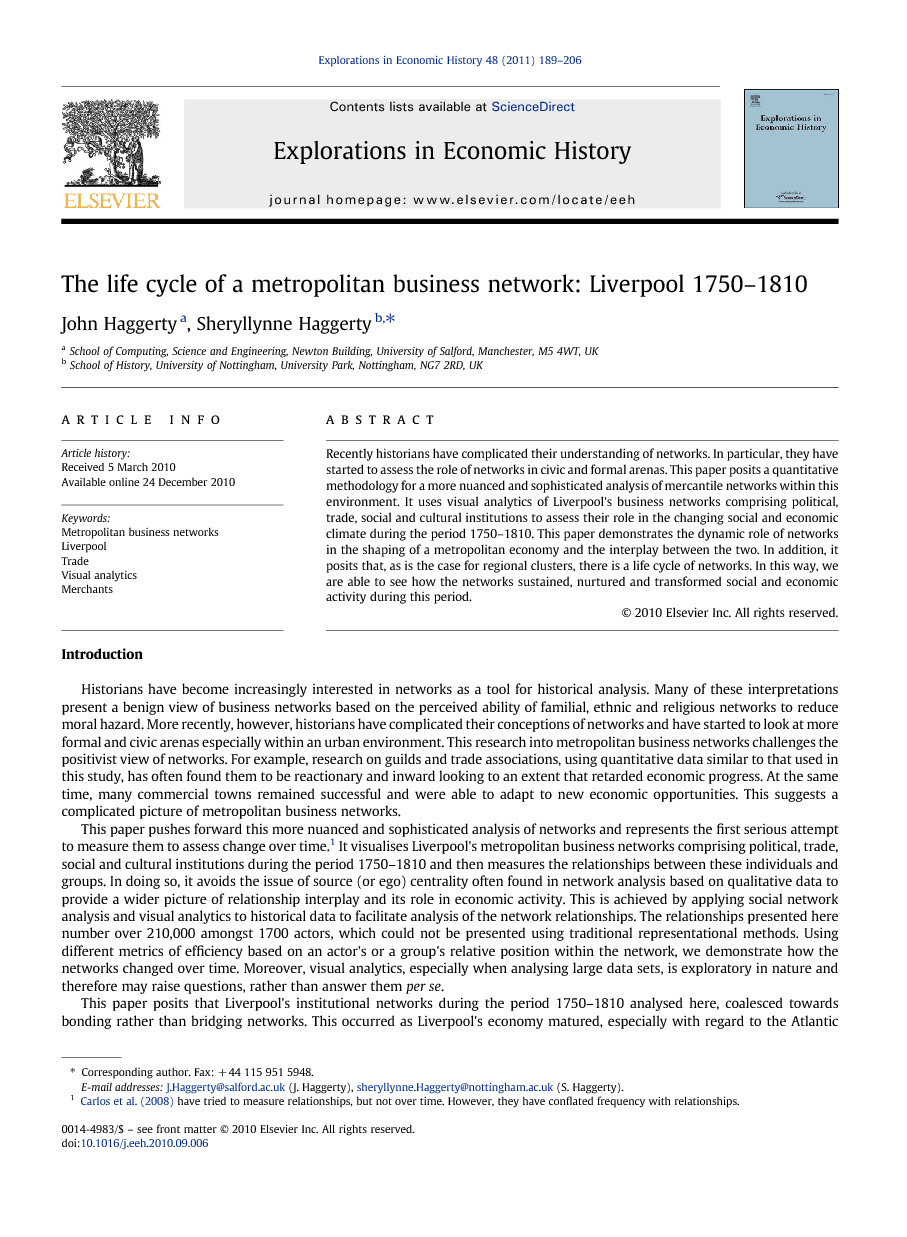 Recently historians have complicated their understanding of networks. In particular, they have started to assess the role of networks in civic and formal arenas. This paper posits a quantitative methodology for a more nuanced and sophisticated analysis of mercantile networks within this environment. It uses visual analytics of Liverpool's business networks comprising political, trade, social and cultural institutions to assess their role in the changing social and economic climate during the period 1750–1810. This paper demonstrates the dynamic role of networks in the shaping of a metropolitan economy and the interplay between the two. In addition, it posits that, as is the case for regional clusters, there is a life cycle of networks. In this way, we are able to see how the networks sustained, nurtured and transformed social and economic activity during this period.

Historians have become increasingly interested in networks as a tool for historical analysis. Many of these interpretations present a benign view of business networks based on the perceived ability of familial, ethnic and religious networks to reduce moral hazard. More recently, however, historians have complicated their conceptions of networks and have started to look at more formal and civic arenas especially within an urban environment. This research into metropolitan business networks challenges the positivist view of networks. For example, research on guilds and trade associations, using quantitative data similar to that used in this study, has often found them to be reactionary and inward looking to an extent that retarded economic progress. At the same time, many commercial towns remained successful and were able to adapt to new economic opportunities. This suggests a complicated picture of metropolitan business networks. This paper pushes forward this more nuanced and sophisticated analysis of networks and represents the first serious attempt to measure them to assess change over time.1 It visualises Liverpool's metropolitan business networks comprising political, trade, social and cultural institutions during the period 1750–1810 and then measures the relationships between these individuals and groups. In doing so, it avoids the issue of source (or ego) centrality often found in network analysis based on qualitative data to provide a wider picture of relationship interplay and its role in economic activity. This is achieved by applying social network analysis and visual analytics to historical data to facilitate analysis of the network relationships. The relationships presented here number over 210,000 amongst 1700 actors, which could not be presented using traditional representational methods. Using different metrics of efficiency based on an actor's or a group's relative position within the network, we demonstrate how the networks changed over time. Moreover, visual analytics, especially when analysing large data sets, is exploratory in nature and therefore may raise questions, rather than answer them per se. This paper posits that Liverpool's institutional networks during the period 1750–1810 analysed here, coalesced towards bonding rather than bridging networks. This occurred as Liverpool's economy matured, especially with regard to the Atlantic trade, and the slave trade in particular. However, this study also argues that networks are dynamic, fluctuate over time and have a life cycle. We therefore find that various networks were in operation at the same time. This means that, as with regional clusters, some will eventually wither, but this facilitates the emergence of new and more dynamic networks in turn. This paper first outlines the major themes in the related literature on networks and places our contribution in context. It then outlines the methodology and the eighteenth-century Liverpool case study. This is followed by a discussion on the rise and fall of a section of Liverpool's Metropolitan Business Networks. Finally, we draw our conclusions.