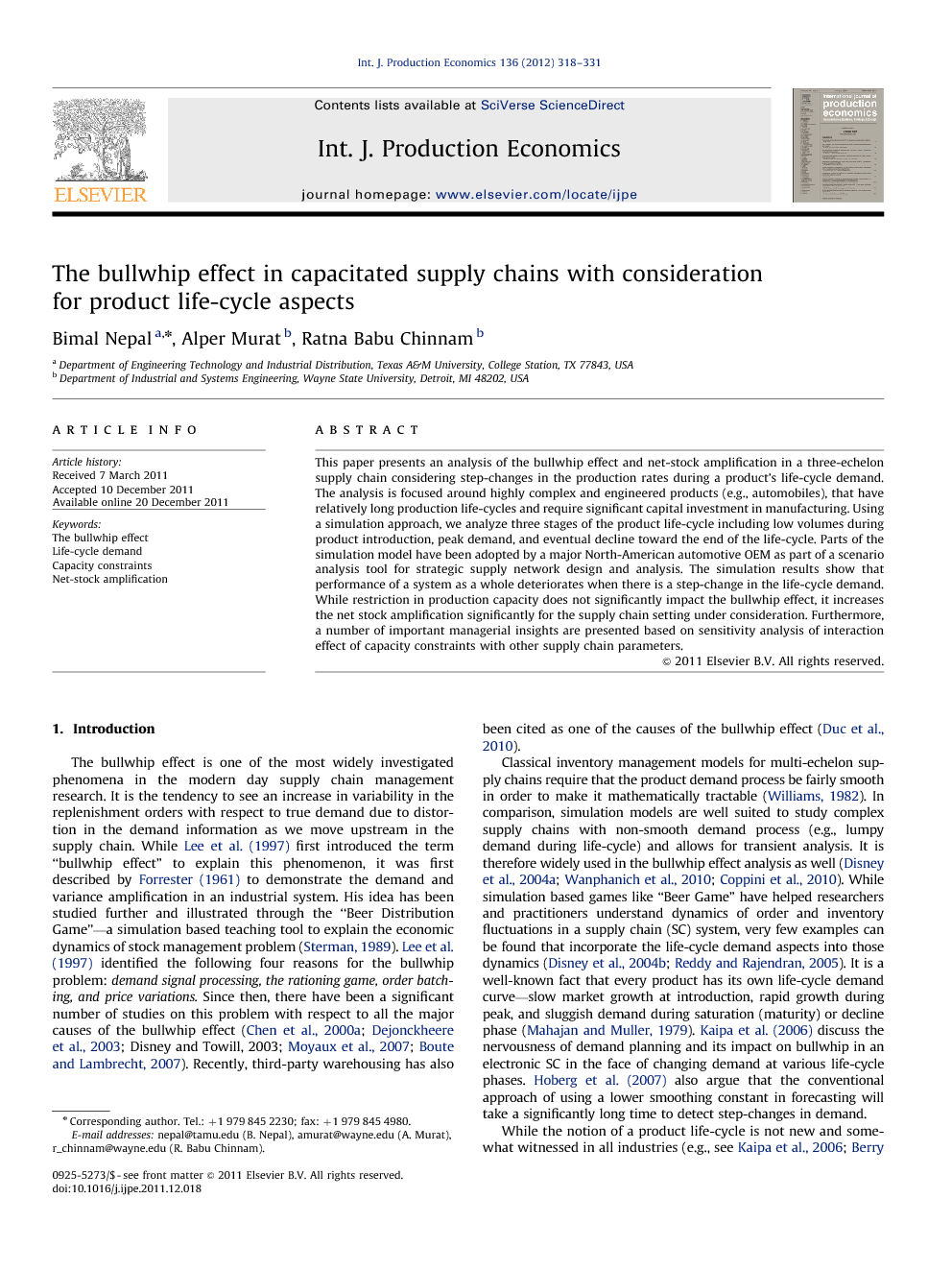 This paper presents an analysis of the bullwhip effect and net-stock amplification in a three-echelon supply chain considering step-changes in the production rates during a product's life-cycle demand. The analysis is focused around highly complex and engineered products (e.g., automobiles), that have relatively long production life-cycles and require significant capital investment in manufacturing. Using a simulation approach, we analyze three stages of the product life-cycle including low volumes during product introduction, peak demand, and eventual decline toward the end of the life-cycle. Parts of the simulation model have been adopted by a major North-American automotive OEM as part of a scenario analysis tool for strategic supply network design and analysis. The simulation results show that performance of a system as a whole deteriorates when there is a step-change in the life-cycle demand. While restriction in production capacity does not significantly impact the bullwhip effect, it increases the net stock amplification significantly for the supply chain setting under consideration. Furthermore, a number of important managerial insights are presented based on sensitivity analysis of interaction effect of capacity constraints with other supply chain parameters.

The bullwhip effect has generated tremendous interest in the SC research community. Numerous simulation-based and analytical models have been developed in the literature to quantify as well as to reduce the bullwhip effect. Apart from the information sharing issue, the prior works mostly dealt with traditional problem settings such as the correlated demand process, the common forecasting techniques, and an OUT inventory policy. Most of the prior models have been developed around a single stage supply chain. Furthermore, these models have rarely considered some of the real-world issues such as capacity restriction and life-cycle demand. This paper has presented an analysis of a three echelon SC considering capacity restriction and step-changes in supply consumption rate due to life-cycle demand phases. An analytical expression has been presented to quantify the net-stock amplifications for a single stage SC using exponential forecasting. The analysis was then extended to a three stage SC network via simulation and empirical testing. The three-echelon SC setting consisted of an OEM and Tier 1, Tier 2 suppliers. While each node had capacity restriction, there were no short shipments meaning that back orders were allowed. We studied the impact of step-changes in the life-cycle demand (which caused sudden change in the supply consumption rates at each echelon) on the bullwhip effect and NS amplification, at three phases (introduction, peak, and decline or end-of-life) of the product life-cycle. Four scenarios were analyzed through simulation. The first scenario involved a simple three-echelon SC network with unlimited capacity, AR(1) demand process, and exponential smoothing forecasting. As anticipated, it showed that key performance metrics such as the bullwhip effect and NS amplification increased exponentially as we moved up the chain. The second scenario considered a capacitated SC network with all the others parameters remaining unchanged from the previous scenario. It was discovered that the NS amplification increased at much higher rate in the capacitated network than that in the uncapacitated network at all echelons. Obviously, the rate of the NS increase was the worst for T2, followed by T1 and OEM, respectively. Interestingly enough, although the bullwhip effect was present at all echelons, a direct correlation between the bullwhip effect and capacity level could not be established. In the third and fourth scenarios, we studied relationship between the step-changes in production rate due to life-cycle demand and the change in the performance level of the SC system with and without capacity constraints, respectively. The simulation results showed that performance of a system as a whole deteriorated when there was a step-change in the life-cycle demand. Particularly, key performance metrics such as the bullwhip effect and the NS amplification rose sharply during the peak phase. Lastly, the NS amplification was less adversely affected by the limited capacity when there were step changes in the supply consumption rate. In addition, a number of sensitivity analyses were performed to examine the impact on the supply chain performance due to interaction of capacity constraint with the other SC characteristics and operating parameters like forecasting, autocorrelation coefficient, and duration of life cycle phases. The sensitivity analysis results also showed that there was no evidence to establish the correlation between the capacity constraint and the bullwhip effect regardless of its interaction with the other parameters. However, there was significant difference in the magnitudes of the NS amplification between the capacitated and the uncapacitated supply chains in all the cases. Sensitivity analysis of duration of life cycle phases on the supply chain performance was also performed to ascertain the impact of a step-change on the bullwhip effect and the NS amplification. However, the results have confirmed our original hypothesis that a step-change in demand during different phases of life cycle would directly contribute to the bullwhip effect and the NS amplification regardless of duration of lifecycle phases. While this study has revealed many important insights with respect to capacity constraint and step-changes in demand, it has made some critical assumptions. For example, the paper assumed complete shipment of orders (although with penalty costs as presented in Lee et al., 2000) and common SC policies throughout the life-cycle regardless of the demand situation. Future work will involve the analysis with both incomplete shipments and target finished goods inventory. Furthermore, we used AR(1) to model demand process. However, it would be interesting to analyze if the similar conclusions on the bullwhip effect hold true in a situation where unexpected events such as product recalls can affect the demand.