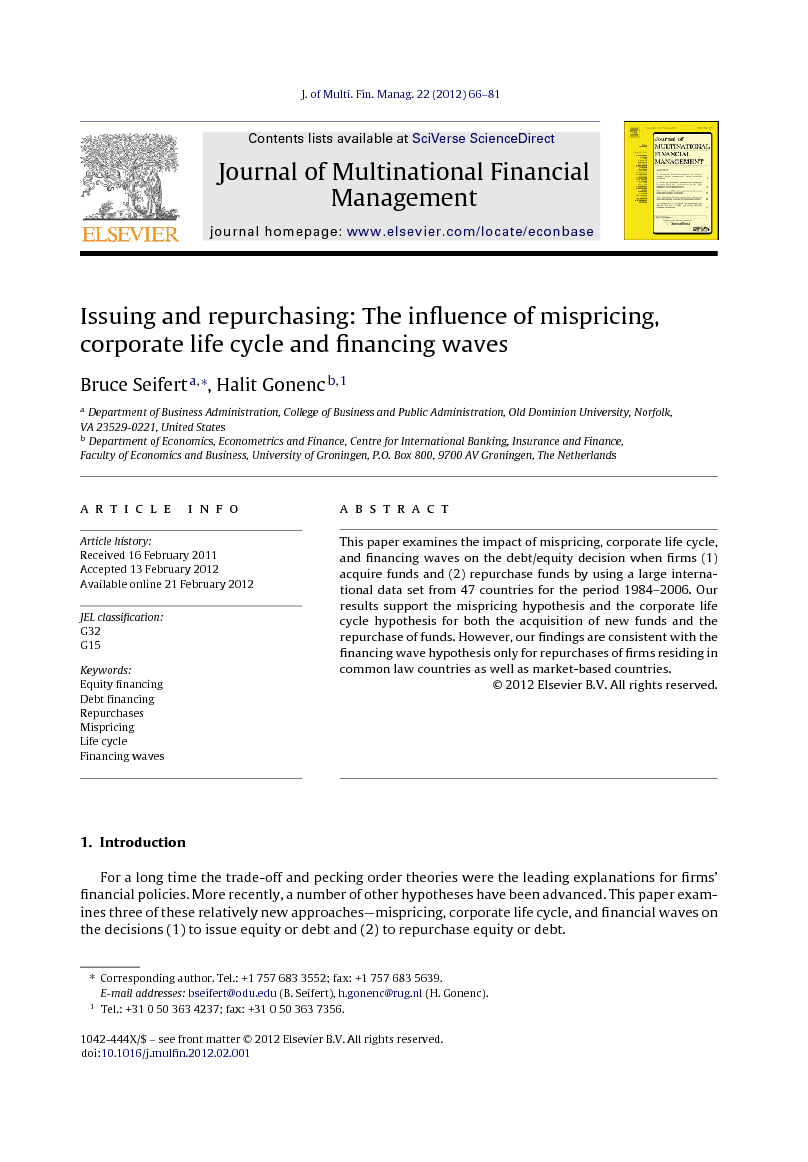 This paper examines the impact of mispricing, corporate life cycle, and financing waves on the debt/equity decision when firms (1) acquire funds and (2) repurchase funds by using a large international data set from 47 countries for the period 1984–2006. Our results support the mispricing hypothesis and the corporate life cycle hypothesis for both the acquisition of new funds and the repurchase of funds. However, our findings are consistent with the financing wave hypothesis only for repurchases of firms residing in common law countries as well as market-based countries.

It is well known that market imperfections (for example, taxes, bankruptcy costs, agency costs, and information asymmetries) make capital structure relevant and important. We seek to understand better how firms make capital structure decisions. Our paper examines three relatively new theories of capital structure (mispricing, financial waves, and corporate life cycle) to see if they can help explain firms’ issuance and repurchase decisions. Our approach for testing these three theories differs from previous research. Instead of asking whether mispricing, financial waves or the corporate life cycle are associated with changes in equity, we inquire instead whether these three theories are related to increases or decreases in equity relative to debt. Our results show that mispricing influences both the decision to issue equity and the decision to repurchase equity. Our findings suggest that some executives time their equity issues and repurchases. These managers issue after high-adjusted returns and before low-adjusted returns and repurchase after low-adjusted returns but before high-adjusted returns. We also find support for the corporate life cycle hypothesis. Younger firms issue more equity and repurchase less equity than older firms. On the other hand, our results are not consistent with the financing wave hypothesis. Firms do not issue relatively more equity during economic expansion periods. Only for common law countries and market-based countries do we find some evidence for the financial wave hypothesis and that is limited to repurchases. Overall our findings are fairly robust across different samples (all, large changes, US, non-US, common law, civil law, market-based, and bank-based). With one noticeable exception (repurchasing on the financial wave hypothesis), our results do not depend on legal regimes or financial structure. Our conclusions are also not based on US observations alone as the findings from non-US observations generally mirror those from the US. Future research might investigate under what circumstances these hypotheses hold. For example, does the amount of new investment needed (large or small) influence whether mispricing, financing waves, or corporate life cycle hold? We could subdivide the observations into those where the firm had unusually large capital expenditures as a percent of total assets versus those where the ratio of capital expenditures to total assets was smaller and see whether the three hypotheses hold in both groups. Our empirical design would have to change to address this question. Similarly, observations could be grouped according to how large the amount of cash and short-term investments the firm holds.