عنوان انگلیسی
When is a network a nexus for innovation? A study of public nanotechnology R&D projects in the Netherlands
دانلود فوری مقاله + سفارش ترجمه 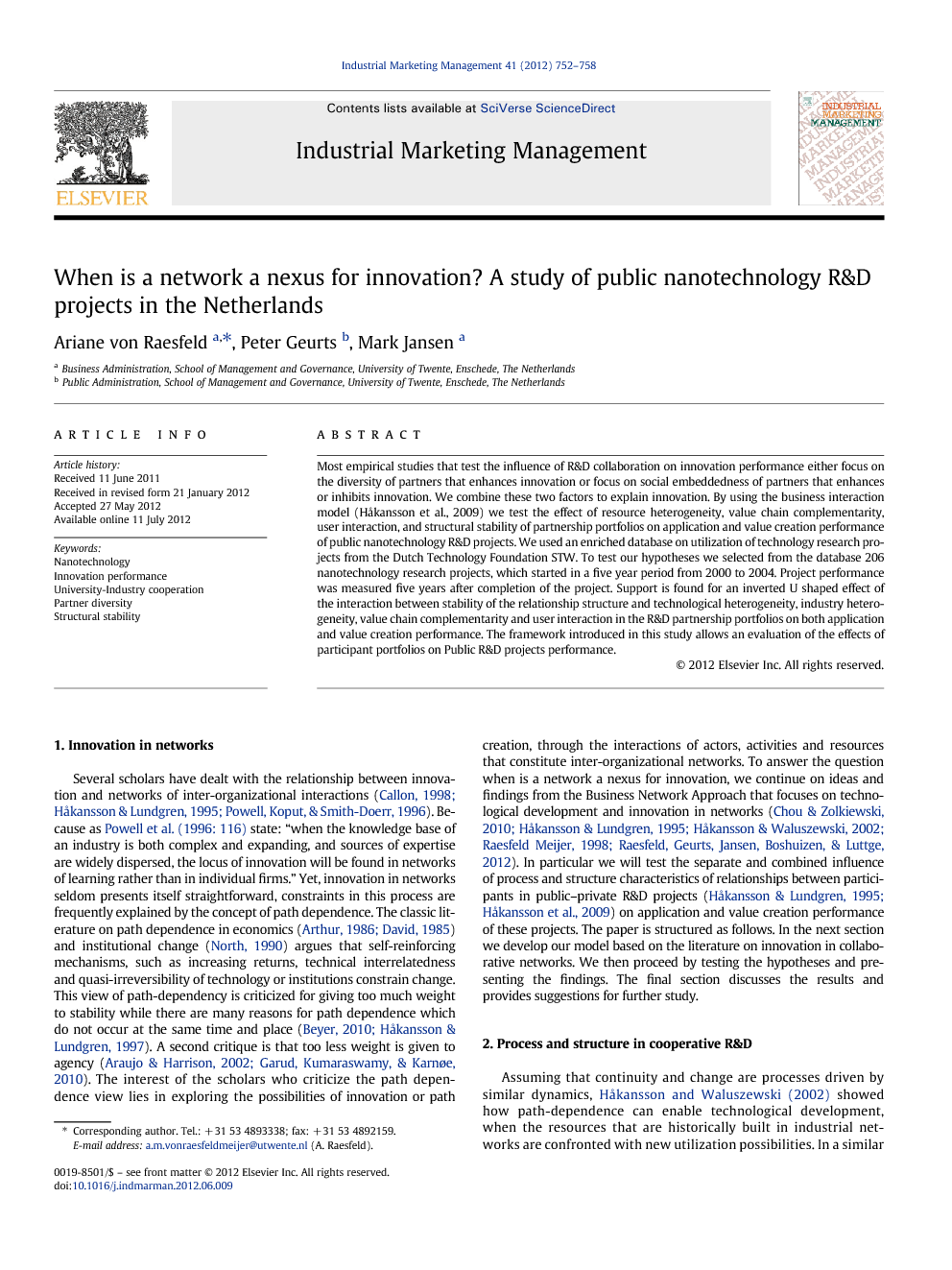 Most empirical studies that test the influence of R&D collaboration on innovation performance either focus on the diversity of partners that enhances innovation or focus on social embeddedness of partners that enhances or inhibits innovation. We combine these two factors to explain innovation. By using the business interaction model (Håkansson et al., 2009) we test the effect of resource heterogeneity, value chain complementarity, user interaction, and structural stability of partnership portfolios on application and value creation performance of public nanotechnology R&D projects. We used an enriched database on utilization of technology research projects from the Dutch Technology Foundation STW. To test our hypotheses we selected from the database 206 nanotechnology research projects, which started in a five year period from 2000 to 2004. Project performance was measured five years after completion of the project. Support is found for an inverted U shaped effect of the interaction between stability of the relationship structure and technological heterogeneity, industry heterogeneity, value chain complementarity and user interaction in the R&D partnership portfolios on both application and value creation performance. The framework introduced in this study allows an evaluation of the effects of participant portfolios on Public R&D projects performance.

Several scholars have dealt with the relationship between innovation and networks of inter-organizational interactions (Callon, 1998, Håkansson and Lundgren, 1995 and Powell et al., 1996). Because as Powell et al. (1996: 116) state: “when the knowledge base of an industry is both complex and expanding, and sources of expertise are widely dispersed, the locus of innovation will be found in networks of learning rather than in individual firms.” Yet, innovation in networks seldom presents itself straightforward, constraints in this process are frequently explained by the concept of path dependence. The classic literature on path dependence in economics (Arthur, 1986 and David, 1985) and institutional change (North, 1990) argues that self-reinforcing mechanisms, such as increasing returns, technical interrelatedness and quasi-irreversibility of technology or institutions constrain change. This view of path-dependency is criticized for giving too much weight to stability while there are many reasons for path dependence which do not occur at the same time and place (Beyer, 2010 and Håkansson and Lundgren, 1997). A second critique is that too less weight is given to agency (Araujo and Harrison, 2002 and Garud et al., 2010). The interest of the scholars who criticize the path dependence view lies in exploring the possibilities of innovation or path creation, through the interactions of actors, activities and resources that constitute inter-organizational networks. To answer the question when is a network a nexus for innovation, we continue on ideas and findings from the Business Network Approach that focuses on technological development and innovation in networks (Chou and Zolkiewski, 2010, Håkansson and Lundgren, 1995, Håkansson and Waluszewski, 2002, Raesfeld Meijer, 1998 and Raesfeld et al., 2012). In particular we will test the separate and combined influence of process and structure characteristics of relationships between participants in public–private R&D projects (Håkansson and Lundgren, 1995 and Håkansson et al., 2009) on application and value creation performance of these projects. The paper is structured as follows. In the next section we develop our model based on the literature on innovation in collaborative networks. We then proceed by testing the hypotheses and presenting the findings. The final section discusses the results and provides suggestions for further study.

In this paper we investigated the separate and combined influence of different structural aspects of the R&D partnership portfolios and the process aspect of network stability on the R&D project's application and value creation performance. There is a large body of research on the impact of a diversity of partnership on innovation (e.g. Becker and Dietz, 2004, Nelson and Winter, 1982, Nieto and Santamaria, 2007 and Nooteboom et al., 2007). There is a comparable large body of research on the impact of relational structure on innovation (e.g. Ahuja, 2000, Gulati, 1995a and Powell et al., 1996). Less research combines both explaining factors (e.g. Gilsing et al., 2008 and Petruzelli, 2011) and those who do focus on dyadic relationships, with the exception of Håkansson and Lundgren (1997) who provide evidence from case studies on technological development in networks of organizations. Our contributions lie in investigating the combined effect of R&D partnership portfolio heterogeneity, interdependence, and connectivity together with network stability on innovation performance. In doing so we applied the business interaction model (Håkansson et al., 2009) to an analysis of time and space in business networks. Also we further test prior research of Håkansson and Lundgren (1997) on technological development in networks that provides evidence from case studies. The explained variance of our model improved with the addition of the combined effect of structural and processual aspects of R&D partnership portfolios, indicating that these two should be considered together.