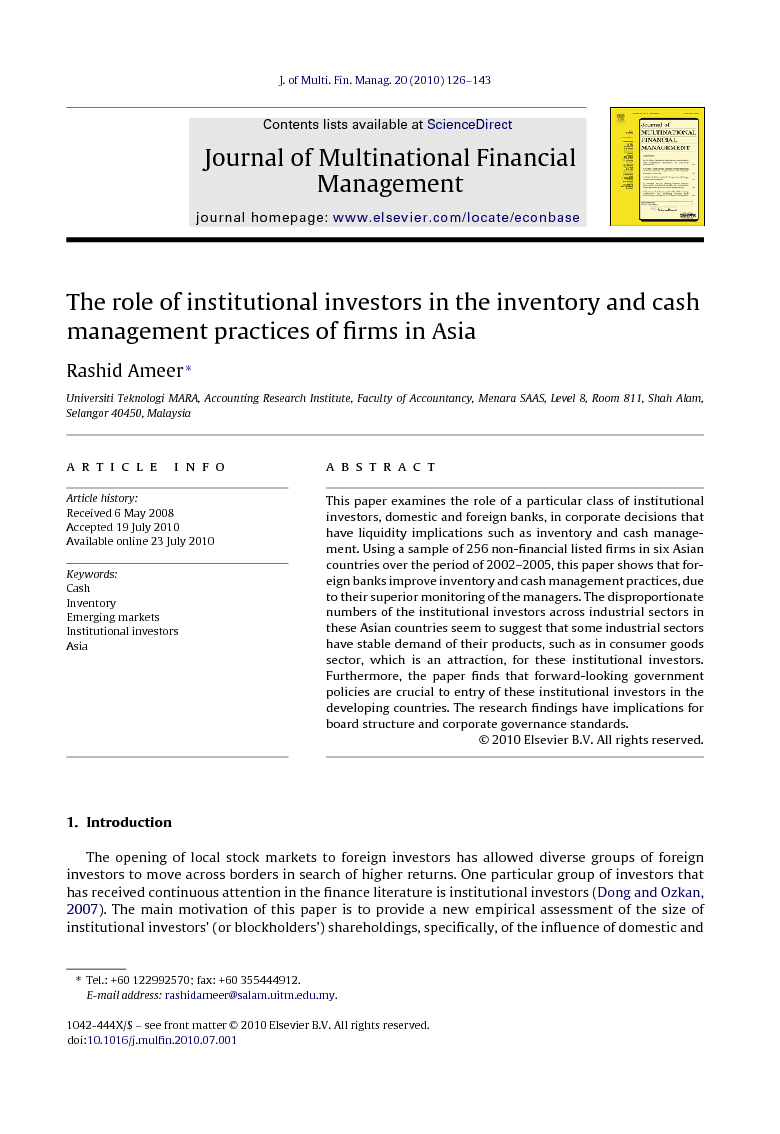 This paper examines the role of a particular class of institutional investors, domestic and foreign banks, in corporate decisions that have liquidity implications such as inventory and cash management. Using a sample of 256 non-financial listed firms in six Asian countries over the period of 2002–2005, this paper shows that foreign banks improve inventory and cash management practices, due to their superior monitoring of the managers. The disproportionate numbers of the institutional investors across industrial sectors in these Asian countries seem to suggest that some industrial sectors have stable demand of their products, such as in consumer goods sector, which is an attraction, for these institutional investors. Furthermore, the paper finds that forward-looking government policies are crucial to entry of these institutional investors in the developing countries. The research findings have implications for board structure and corporate governance standards.

The opening of local stock markets to foreign investors has allowed diverse groups of foreign investors to move across borders in search of higher returns. One particular group of investors that has received continuous attention in the finance literature is institutional investors (Dong and Ozkan, 2007). The main motivation of this paper is to provide a new empirical assessment of the size of institutional investors’ (or blockholders’) shareholdings, specifically, of the influence of domestic and foreign banks on the inventory and cash holdings of non-financial listed firms in Japan, Singapore, Malaysia, Indonesia, South Korea, and Thailand.1 Our current knowledge about the role of these institutional investors in these countries is still limited. Previous studies have investigated the determinants of U.S. institutional investors’ (such as mutual funds, pension funds, and hedge funds) investment in emerging markets (see Ko et al., 2007, Aggarwal et al., 2005, Kaminsky et al., 2001 and Park and Song, 2001) and examined the role of domestic banks in influencing firms’ investment and financing decisions (see Hoshi et al., 1990). Our study is different from other studies on East Asian countries, which focused almost exclusively on family and government ownership because we chose to study domestic and foreign banks as institutional blockholders in these economies. From previous studies, we know that institutional investors are more methodical and better at evaluation of managerial performance compared to ordinary investors.2 While Seifert et al. (2005) argue that although these institutional blockholders have their own separate interests, these investors might cooperate with local managers to pursue strategies that may (or may not) maximize shareholders’ wealth, and Patibandla (2006) further adds that agency costs are more problematic for foreign institutional blockholders compared to domestic blockholders because of different legal environments. Government regulations affect the ways companies are owned, the manner in which they are controlled and the process by which changes in ownership and control take place. We selected six Asian countries – Japan, Korea, Indonesia, Malaysia, Singapore and Thailand – because the experience and the role of foreign vs. domestic banks as institutional investors vary across these countries, which, as we argue in this paper, have implications for the incumbent firms.3 We excluded China because it has a completely separate market for foreigners. For instance, recent studies (see Ko et al., 2007 and Kamesaka et al., 2003) show that the nature and development of institutional investors are different in Japan and Korea. In Japan, ownership is often concentrated within a small number of other directly related firms, banks, and families. Japanese banks (the biggest institutional investors) keep a closer relationship with industrial firms through mutual stock ownership; in other words, Japanese banks own stocks not for high investment returns but for the business relationship and control (see Aoki, 2002 for a comprehensive review of main banking system in Japan). By virtue of their closer involvement in the day-to-day activities of firms, commercial banks may have cheaper and better access than do other institutional investors to the information required to monitor a firm's investment policy (Li, 1994). A borrowing firm might face switching costs once this relationship is severed, therefore, firms commonly adhere to the policy suggestions of the banks and do not face investment constraints (Hoshi et al., 1990). Secondly, previous Asian studies have mainly focused on the relatively developed East Asian countries such as Singapore (e.g. Chuanrommanee and Swierczek, 2007 and Mak and Kusnadi, 2005) and there is a lack of evidence on the role of such investors in the less advanced corporate governance countries such as Indonesia and Thailand (Klapper and Love, 2002). Thailand and Indonesia set an upper limit (49%) for foreign institutional investors (which was subsequently relaxed in Indonesia). Recently, Indonesia introduced a Good Corporate Governance Code but it is not mandatory for all firms. The adoption of new codes of corporate governance takes into account the different characteristics of each company, such as the size of the share capital, for example.4 In Thailand, domestic institutional investors, such as the banks, mutual funds and securities firms, lack good corporate governance (Nikomborirak and Tangkitvanich, 1999). Daouk et al. (2006) ranks Thailand at the bottom of the list of 22 developed and 10 developing countries according to the quality of their corporate governance. In Japan, because of the well-established convention of exclusive delegation of integrated monitoring to the banks, the specialized monitoring abilities of other institutions, such as securities houses, rating agencies, venture capitalist firms and various funds, are much less developed. In Malaysia, the Bumiputera policy of giving a 30% stake to local Malaysians in listed firms and several other guidelines are potential limitations to institutional investments.5 Our justification for examining the role of foreign institutional investors (i.e., foreign banks not domiciled in sample countries) is based on the assumption that the presence of institutional investors such as foreign banks would be of value relevance for the firms. Recent studies (see Tribo, 2007, Pinkowitz et al., 2006, Faulkender and Wang, 2006, Ozkan and Ozkan, 2004 and Dittmar et al., 2003) have shown that corporate governance is important in explaining the inventory and cash holdings of firms. The most relevant papers to ours are Chen and Yur-Austin (2007), which focuses on the impact of the blockholders on asset utilization, and Tribo (2007), which focuses on the relationship between blockholders and inventory policy. The major findings of our study are as follows: political stability, government effectiveness and regulatory quality significantly influence foreign banks’ shareholdings. Our results show that an increase in a foreign bank's shareholding generally leads to prudent investment in the inventory that avoids unnecessary built up of inventories. Furthermore, our findings are consistent with the expectation that transient institutional investors tend to reduce investment in inventory. The organization of this paper is as follows: Section 2 contains review of relevant literature. Section 3 discusses the sample and methodology. Section 4 provides preliminary results, and explains and discusses the estimation results. Section 5 concludes the paper.

This paper investigates the impact of domestic and foreign banks’ shareholdings on inventory and cash holdings. Our results show that an increase in a foreign bank's shareholding generally leads to increase in cash holding and reduction in inventory holding as compared to local banks’ shareholdings. Empirical results support most of our hypotheses; in particular, we find that transient institutional investors tend to reduce investment in inventory compared to more dedicated institutional investors with long-term investment horizons. It can be concluded that expertise and resourcefulness of these investors are valuable for the firms in Asian region, and their assessment of working capital needs could add value to these firms. From the above conclusion, we layout following policy implications: there should be changes in the foreign investment policies to allow portfolio investors, such as foreign banks, to enter domestic markets, because this will not only increase the competition among the domestic banks but also enhance the corporate governance system. Indeed our results show that shareholdings of foreign banks in local non-financial firms are significantly influenced by political stability, government effectiveness and regulatory quality. Secondly, domestic firms should have foreign institutional investors on their boards. We argue that having a foreign investor appointed as a member of the board (e.g., as a non-executive director) can produce changes. For instance, if foreign investors sit on the audit committee, they bring with them different cultural, ethical values and norms that might produce changes in the corporate internal controls and ethical practices of the firm. Rodgers and Gago (2003) argue that CEOs’ compensation might be better structured and monitored as a result of such changes. Pass (2004) extended his approval of such action because members of such committees monitor executive actions and question executive decisions. Similarly, foreign investor members of the remuneration committee might introduce market-based performance appraisal criteria. The remuneration committee plays a crucial role in the determination of CEOs’ remuneration and fringe benefits (Barkema and Mejia, 1998). However, an unintended consequence of this might be that the expatriate investors ask for higher fringe benefits and salary for themselves due to their relocation. Our findings make new contribution to governance literature to extend our understanding about the role of these investors in Asian countries. We propose two directions for future research from our work. First, it would be important to examine the optimal level of foreign portfolio investment in a local firm. Many governments in this region are competing for foreign direct investment in the service sectors by designing attractive policies. For instance, Malaysian government has announced relaxation of foreign investment limits in the service sectors and allowed foreign banks entry in Islamic finance and insurance services. Second, we propose that studying the impact of other local institutional investors’ shareholdings, such as government-sponsored funds on the firm's performance and managerial compensation would be resourceful to understand government role in development of capital markets in this region. For instance, Malaysia has sizeable government-sponsored institutional investors such as Khazanah Nasional Bhd., Employee Provident Fund and in Singapore, Temasek Holdings. These investors have sizeable interest in the domestic industrial sectors such as telecommunication, banks, media, real estate, infrastructure, consumer goods and lifestyle. Fullerton Financial Holdings a wholly owned subsidiary of Temasek Holdings has also sizeable investments in the financial sectors both at home and abroad. We propose that a comparative longitudinal study of these types of government-funded institutional investors would be useful to investigate the role of government in fostering ideal corporate governance and capital market development at large.