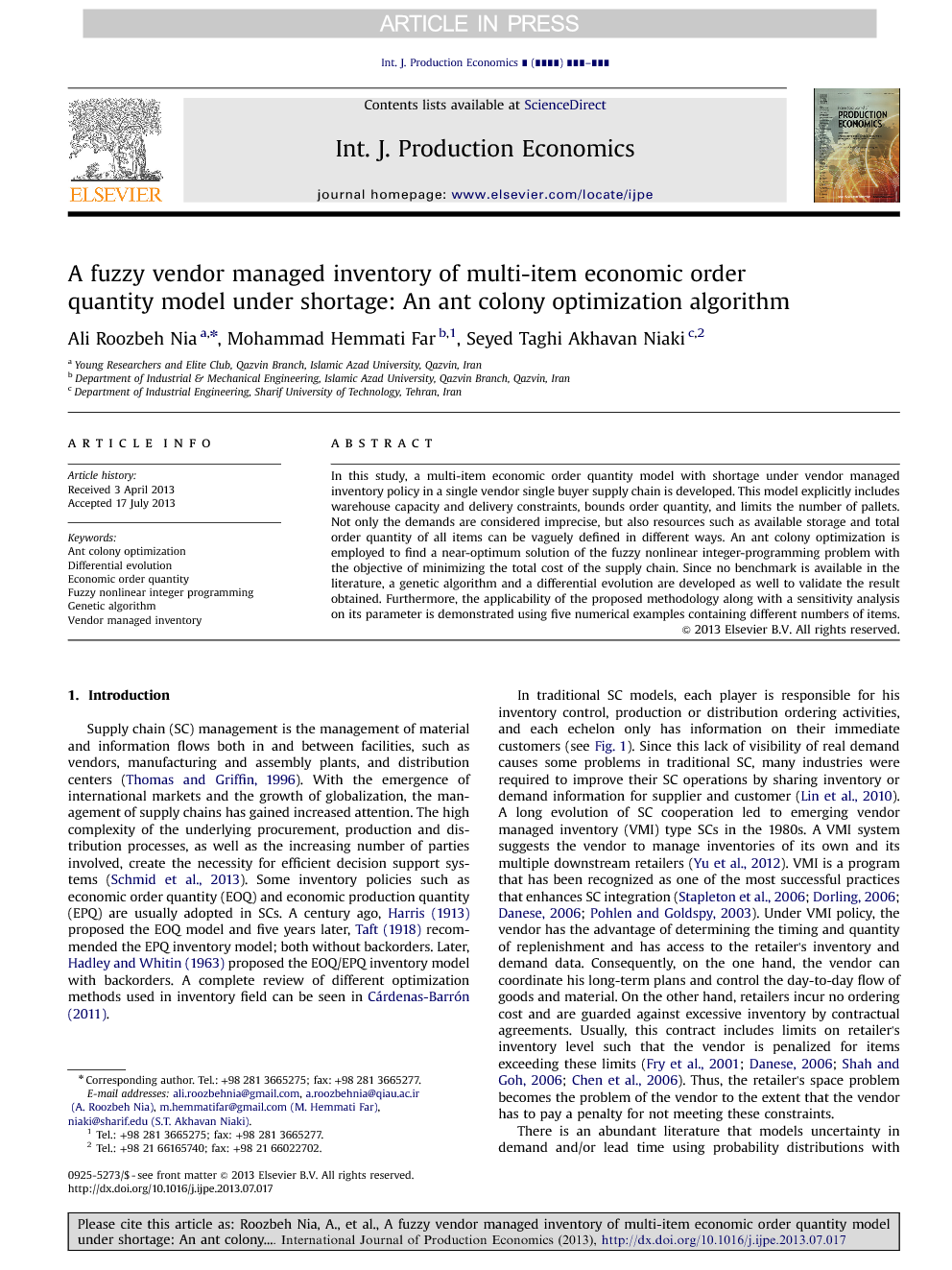 In this study, a multi-item economic order quantity model with shortage under vendor managed inventory policy in a single vendor single buyer supply chain is developed. This model explicitly includes warehouse capacity and delivery constraints, bounds order quantity, and limits the number of pallets. Not only the demands are considered imprecise, but also resources such as available storage and total order quantity of all items can be vaguely defined in different ways. An ant colony optimization is employed to find a near-optimum solution of the fuzzy nonlinear integer-programming problem with the objective of minimizing the total cost of the supply chain. Since no benchmark is available in the literature, a genetic algorithm and a differential evolution are developed as well to validate the result obtained. Furthermore, the applicability of the proposed methodology along with a sensitivity analysis on its parameter is demonstrated using five numerical examples containing different numbers of items.

Supply chain (SC) management is the management of material and information flows both in and between facilities, such as vendors, manufacturing and assembly plants, and distribution centers (Thomas and Griffin, 1996). With the emergence of international markets and the growth of globalization, the management of supply chains has gained increased attention. The high complexity of the underlying procurement, production and distribution processes, as well as the increasing number of parties involved, create the necessity for efficient decision support systems (Schmid et al., 2013). Some inventory policies such as economic order quantity (EOQ) and economic production quantity (EPQ) are usually adopted in SCs. A century ago, Harris (1913) proposed the EOQ model and five years later, Taft (1918) recommended the EPQ inventory model; both without backorders. Later, Hadley and Whitin (1963) proposed the EOQ/EPQ inventory model with backorders. A complete review of different optimization methods used in inventory field can be seen in Cárdenas-Barrón (2011). In traditional SC models, each player is responsible for his inventory control, production or distribution ordering activities, and each echelon only has information on their immediate customers (see Fig. 1). Since this lack of visibility of real demand causes some problems in traditional SC, many industries were required to improve their SC operations by sharing inventory or demand information for supplier and customer (Lin et al., 2010). A long evolution of SC cooperation led to emerging vendor managed inventory (VMI) type SCs in the 1980s. A VMI system suggests the vendor to manage inventories of its own and its multiple downstream retailers (Yu et al., 2012). VMI is a program that has been recognized as one of the most successful practices that enhances SC integration (Stapleton et al., 2006, Dorling, 2006, Danese, 2006 and Pohlen and Goldspy, 2003). Under VMI policy, the vendor has the advantage of determining the timing and quantity of replenishment and has access to the retailer's inventory and demand data. Consequently, on the one hand, the vendor can coordinate his long-term plans and control the day-to-day flow of goods and material. On the other hand, retailers incur no ordering cost and are guarded against excessive inventory by contractual agreements. Usually, this contract includes limits on retailer's inventory level such that the vendor is penalized for items exceeding these limits (Fry et al., 2001, Danese, 2006, Shah and Goh, 2006 and Chen et al., 2006). Thus, the retailer's space problem becomes the problem of the vendor to the extent that the vendor has to pay a penalty for not meeting these constraints. Full-size image (16 K) Fig. 1. An illustration of a traditional supply chain. Figure options There is an abundant literature that models uncertainty in demand and/or lead time using probability distributions with known parameters. However, in many cases where there is little or no historical data available to the inventory decision maker, perhaps due to recent changes in the SC environment, probability distributions may simply not be available, or may not be easily or accurately estimated (Xie et al., 2006). Additionally, in some cases, it may not be possible to collect data on the random variables of interest because of certain system or time constraints. Furthermore, other critical SC parameters, in particular the various costs that impact the system, are often ill-defined and may vary from time to time. All of these situations raise challenges for using traditional inventory models in practice. Fuzzy theory provides an alternate, flexible approach to handle such situations because it allows the model to easily incorporate various experts’ advice in developing critical parameter estimates (Zimmermann, 2001). Fuzzy sets are introduced to avoid imprecise deliveries, orders and demands within SCs and they out-perform traditional VMI by Bullwhip effect and inventory declines (Lin et al., 2010). Adaptive fuzzy VMI control can always provide 100% service levels by adaptively responding to the demand changes according to production capacity, available stock and shortages (Kristianto et al., 2012). While a substantial amount of research works are available in the literature, a brief review of the works on the fuzzy traditional and fuzzy VMI SC is presented in the next section.

In this paper, a multi-item multi-constraint EOQ model with shortage for a single-vendor single-buyer supply chain under vendor managed inventory policy was developed. To bring the model to be applicable to closer to reality problems, additional contractual agreement between the vendor and the buyer including constraints on the number of pallets required to deliver the items, the number of deliveries, and the quantity of an order under fuzzy environment were considered. Not only the storage capacity and the total order quantity of all items but also demands were considered fuzzy. A 3-step procedure consisting of an ant colony optimization was proposed to find a near-optimum solution of a fuzzy nonlinear integer-programming (FNIP) with the objective of minimizing the total cost of the supply chain. Since no benchmark was available in the literature, a genetic algorithm and a differential evolution were developed as well to validate the result obtained. Furthermore, the applicability of the proposed methodology along with a sensitivity analysis on its parameter was shown using five numerical examples in an Iranian automobile supply company containing different numbers of items. The results showed that in both the crisp and the fuzzy models, while the ant colony optimization algorithm was the best algorithm in terms of the required CPU time, differential evolution was the superior algorithm in terms of the total cost. In addition, based on the results in Table 9, the tolerance of objective function (p0p0) has an inverse relation with the fuzzy total cost. This can be a key point for SC decision makers. For future researches in this area, the followings are recommended: (a) Quantity discounts can be allowed. (b) In addition to backorders, lost sales can also be assumed for shortages. (c) Other search-heuristic algorithms such as simulated annealing (SA), imperialist competitive algorithm (ICA), and particle swarm optimization (PSO) may also be employed to solve the problem. (d) Instead of EOQ, economic production quantity (EPQ) model can be considered. (e) Multi-echelon supply chain such as one-buyer multi-supplier, multi-buyer one-supplier, and multi-buyer multi-supplier supply chains can be investigated.