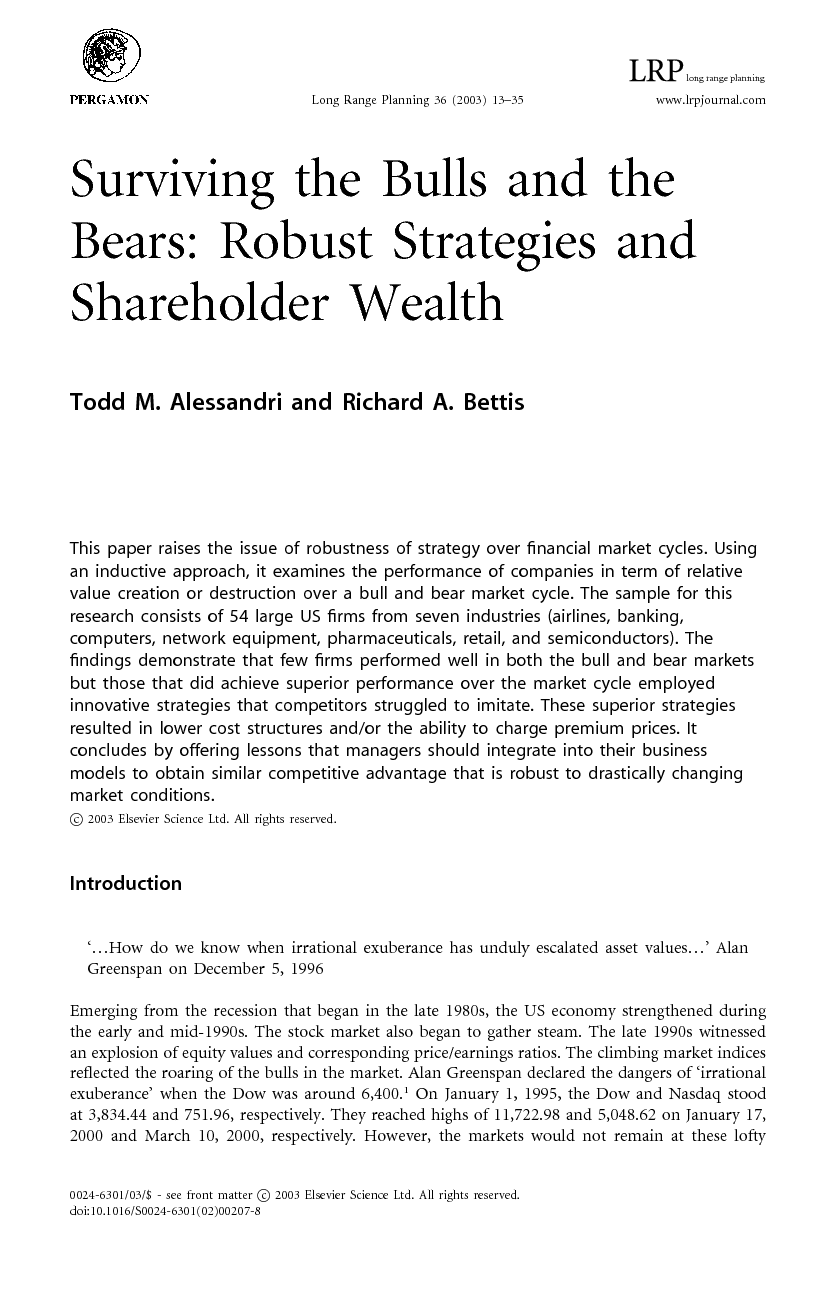 This paper raises the issue of robustness of strategy over financial market cycles. Using an inductive approach, it examines the performance of companies in term of relative value creation or destruction over a bull and bear market cycle. The sample for this research consists of 54 large US firms from seven industries (airlines, banking, computers, network equipment, pharmaceuticals, retail, and semiconductors). The findings demonstrate that few firms performed well in both the bull and bear markets but those that did achieve superior performance over the market cycle employed innovative strategies that competitors struggled to imitate. These superior strategies resulted in lower cost structures and/or the ability to charge premium prices. It concludes by offering lessons that managers should integrate into their business models to obtain similar competitive advantage that is robust to drastically changing market conditions.

Emerging from the recession that began in the late 1980s, the US economy strengthened during the early and mid-1990s. The stock market also began to gather steam. The late 1990s witnessed an explosion of equity values and corresponding price/earnings ratios. The climbing market indices reflected the roaring of the bulls in the market. Alan Greenspan declared the dangers of ‘irrational exuberance’ when the Dow was around 6,400.1 On January 1, 1995, the Dow and Nasdaq stood at 3,834.44 and 751.96, respectively. They reached highs of 11,722.98 and 5,048.62 on January 17, 2000 and March 10, 2000, respectively. However, the markets would not remain at these lofty heights. By August 31, 2001, the Dow stood at 9,949.75 and the Nasdaq stood at 1,805.43. Between the last quarter of 2001 and the end of the third quarter of 2002, these two indices fell further, despite occasional upward excursions. 2 During the economic boom of the late 1990s, many North American firms made important strategy and investment decisions based on the seemingly ever-increasing capitalisation of earnings streams and the resultant low cost of equity. This phenomenon also occurred among some European firms, especially those in the technology sector. The rapid growth in the stock market values produced many distortions. For example, Yahoo.com was worth $125.04 billion on January 3, 2000 (with 1999 revenues of $588.6 million, and 1999 net income of $61.1 million), while on the same date Ford was worth $59.55 billion (with 1999 revenues of $162.6 billion, and 1999 net income of $7.2 billion). Near the peak, firms with relatively modest profits were often selling at p/e multiples of over 100 and were using their high valuations to acquire other more profitable firms. In fact, calculation of how fast and how long some firms would have to grow to justify their valuations resulted in nonsensically large numbers. Under such circumstances, it was easy for strategy and resource allocation to become highly distorted. Gravity, however, would not be denied. Some valuations began softening in 1999, and by early 2000 the entire North American stock market had entered a period of substantial decline. Equity values for many firms plummeted. The bears growled as many firms failed. Declines of more than 90 per cent were not uncommon for large technology companies, while many small technology companies disappeared. For example, Cisco went from $523.8 billion on March 27, 2000 to $99.1 billion on April 6, 2001, a staggering loss of 81 per cent in just over one year. Similarly, JDS Uniphase went from $102.61 billion on September 20, 2000 to $8.54 billion on August 30, 2001. Many technology CEOs, whose pictures had appeared on the cover of business publications in the preceding two years, found themselves without jobs. For large firms outside the technology sector, declines may not have been quite as dramatic, but they were still often huge. Procter & Gamble reached a high of $154.74 billion on January 11, 2000, only to lose 47.9 per cent of its value, falling to $80.49 billion on June 18, 2001. Similarly, Home Depot lost 33.6 per cent of its value, falling from $158.29 billion on December 31, 1999 to $105.01 billion on July 10, 2001.

The ultimate measure of company and senior executive performance is shareholder wealth relative to industry peers. This obviously means paying close attention to the equity markets. The equity markets have been through a historic run-up that many consider an example of a speculative bubble.15 The markets are now sliding down the other side. While the magnitude of this most recent stock market cycle is a bit larger than those experienced in history, this has happened before and will undoubtedly happen again. For many firms, the shareholder value created during the bull market was matched, or in too many cases exceeded, by the shareholder value that was destroyed during the bull market. Our research on a sample of 54 firms across seven industries suggests that strong performance in both the bull and bear market was rare.16 And good strategy, by definition, is rare. However, there are some basic principles that, when followed, can lead to strategies that are robust across business cycles. These basic principles we have suggested support the strategic innovation arguments of several prior researchers, including: Govindarajan and Gupta, Miller, Eisenstat and Foot, Kim and Mauborgne, Markides, and Baden-Fuller and Stopford.17 These authors have highlighted the importance of changing the rules of the game, organisational design and leveraging unique capabilities, offering radically superior value, and the connection between innovation and superior performance relative to industry competitors. Our findings link these implications from previous research to long-term performance that is robust to changes in the market. The objective of strategic innovation should be not only superior performance in any single phase of the market cycle, but also superior performance over booms and recessions in the market. The modest suggestions above offer examples of such strategic actions and are intended to help managers make their firms rare and valuable.