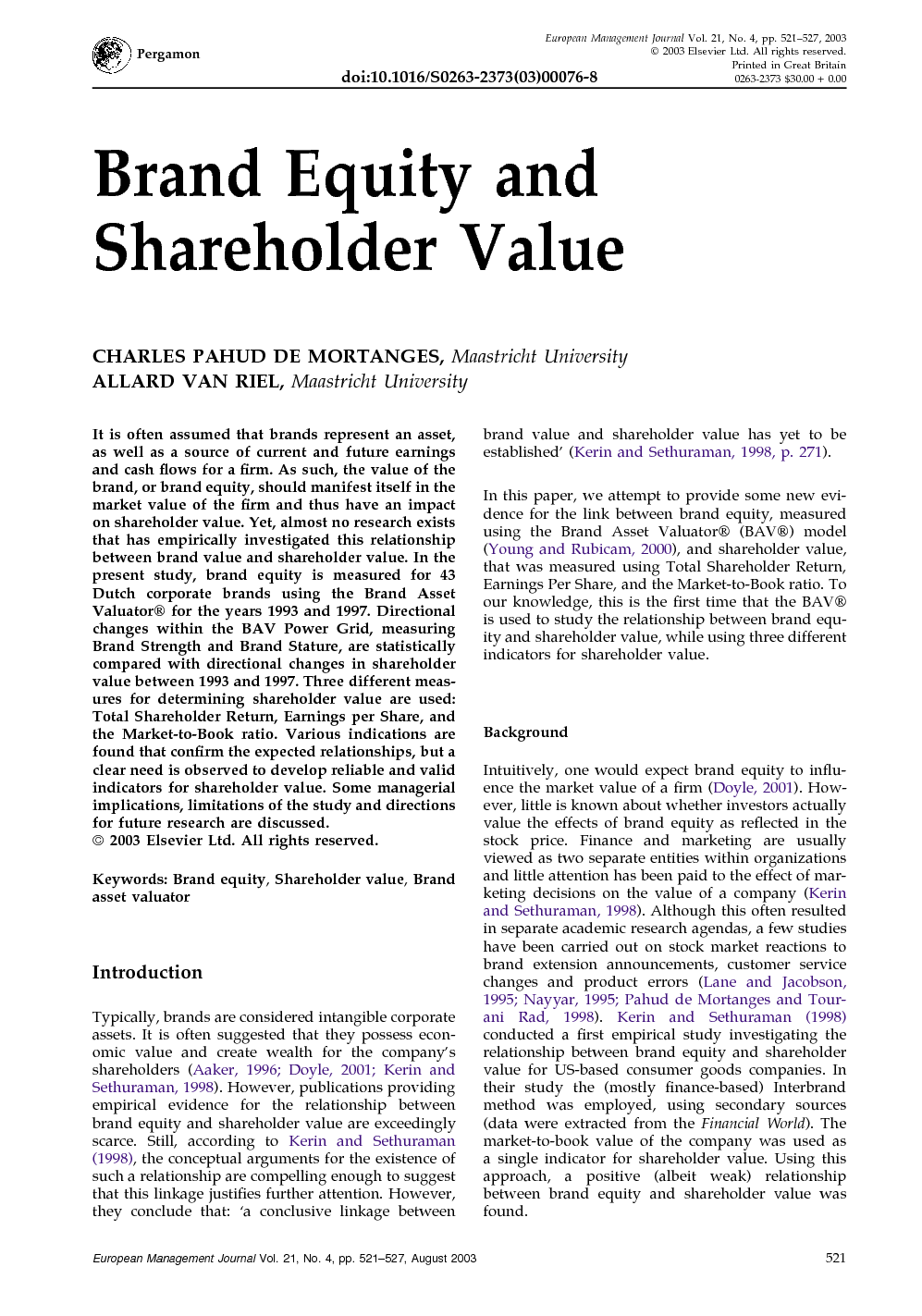 It is often assumed that brands represent an asset, as well as a source of current and future earnings and cash flows for a firm. As such, the value of the brand, or brand equity, should manifest itself in the market value of the firm and thus have an impact on shareholder value. Yet, almost no research exists that has empirically investigated this relationship between brand value and shareholder value. In the present study, brand equity is measured for 43 Dutch corporate brands using the Brand Asset Valuator® for the years 1993 and 1997. Directional changes within the BAV Power Grid, measuring Brand Strength and Brand Stature, are statistically compared with directional changes in shareholder value between 1993 and 1997. Three different measures for determining shareholder value are used: Total Shareholder Return, Earnings per Share, and the Market-to-Book ratio. Various indications are found that confirm the expected relationships, but a clear need is observed to develop reliable and valid indicators for shareholder value. Some managerial implications, limitations of the study and directions for future research are discussed.

The above shows that it is indeed possible to obtain indications of changes in brand equity and demonstrate that the performance (in terms of ‘Strength’ and ‘Stature’) of a brand may have significant impact on the value of a firm. These findings are consistent with the premise that the purpose of marketing is not only to create value for the company’s customers, but that this has to result in creating value for its owners (i.e. the shareholders) as well. A reliable instrument should make it possible to hold marketers in general, and brand managers in particular, accountable for the financial implications of their strategies, especially in terms of shareholder value. Focusing more closely on monitoring brand equity and shareholder value in a frequent and consistent manner will forge a much-desired closer cooperation between marketing and finance professionals within a firm. A number of limitations are associated with this study. First, the relationships we found do not appear to occur consistently and seem to depend strongly on the measures employed to determine shareholder value. This points at the need to develop a valid and reliable measurement instrument for the various dimensions of the shareholder value construct. Second, the relationships we found are relatively weak and asymmetrical. This is in the first place due to limitations with respect to the size and heterogeneity our sample. The criteria used to select the participating companies resulted in a rather unbalanced sample, including a relatively large share of companies that had increased their value in the 1993–1997 period. This is partially due to the fact that changes in value were not corrected for changes in overall stock exchange performance, or industry specific performance indices. More research will therefore be needed to investigate the hypothesized relationships in various industry sectors. This study was also limited to investigating a relationship between the direction of the change in brand equity and the corresponding directional change in shareholder value, and not the magnitude of those changes. In order to determine the effects of investments in marketing strategies more precisely, further research efforts should be devoted to the investigation of correlations between the changes.