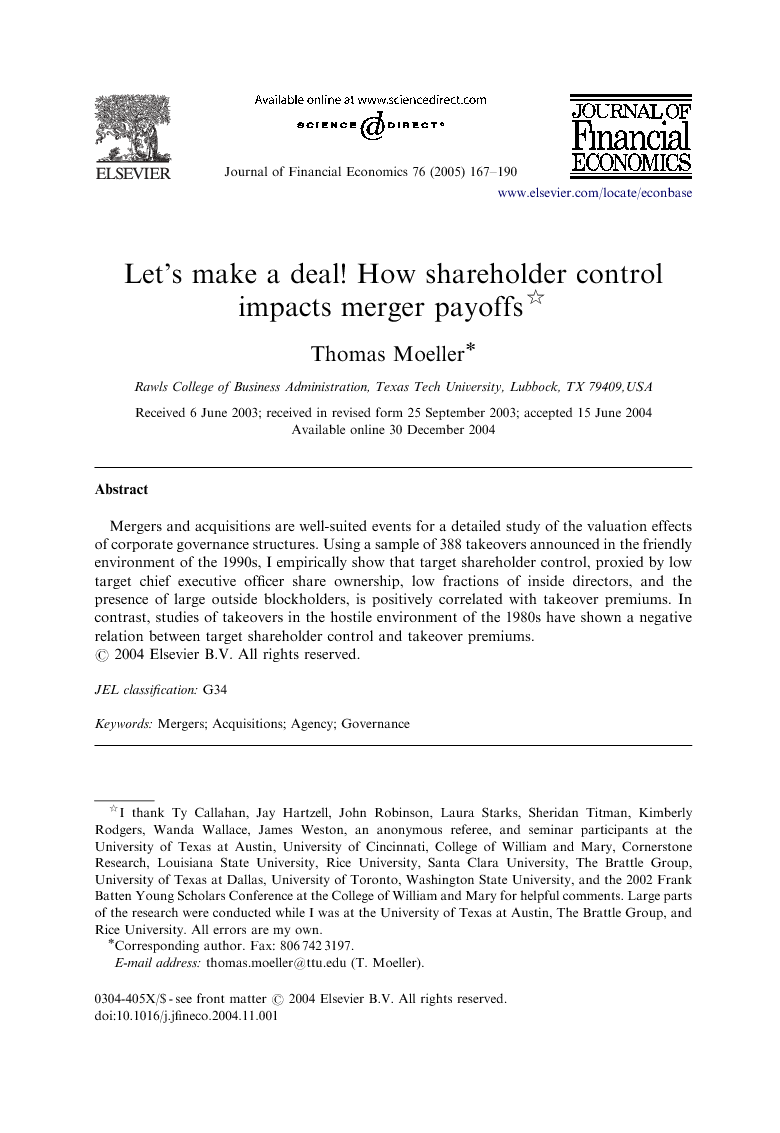 Mergers and acquisitions are well-suited events for a detailed study of the valuation effects of corporate governance structures. Using a sample of 388 takeovers announced in the friendly environment of the 1990s, I empirically show that target shareholder control, proxied by low target chief executive officer share ownership, low fractions of inside directors, and the presence of large outside blockholders, is positively correlated with takeover premiums. In contrast, studies of takeovers in the hostile environment of the 1980s have shown a negative relation between target shareholder control and takeover premiums.

In the 1980s, target shareholder control and takeover premiums were negatively related. I show, however, that this relation is positive in the 1990s. Shareholder control is beneficial in the important market for corporate control. My results suggest that direct shareholder control through outside blockholders and outside directors is most effective, while large share ownership of the target CEO can be harmful to target shareholders. Indirect financial incentives, such as executive stock options, do not seem to mitigate the principal-agent problem. Targets that are highly controlled by shareholders are associated with lower abnormal bidder returns, and CEOs of these targets are less likely to receive executive positions in the merged firm. This evidence suggests that powerful entrenched target CEOs reduce takeover premiums, possibly in return for bidder-provided incentives. Large equity ownership appears to be an inappropriate incentive for CEOs, in particular when the firm becomes a target. The results here and in the related studies have important implications for the potential rent extraction by managers. Clearly, targets with powerful CEOs receive lower takeover premiums. However, premiums are generally positive and average more than 20%, while target CEOs generally lose large amounts of their human capital in takeovers. Given the current abundance of takeover defenses, allowing some rent extraction by managers might be beneficial for shareholders when it increases the probability of receiving profitable takeover offers. The more fundamental question becomes: Why are CEOs allowed to extract large rents when shareholders on their own, e.g., through blockholders, could presumably extract those rents for themselves? Additional research is needed to answer this question.