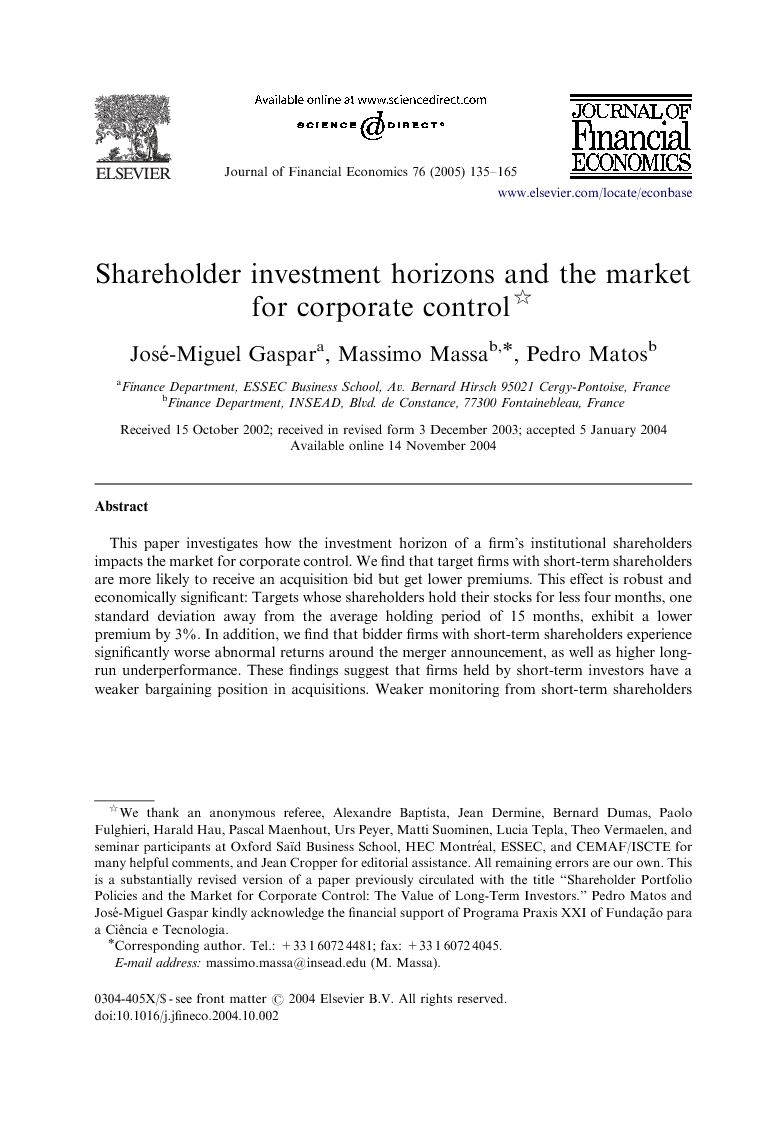 This paper investigates how the investment horizon of a firm's institutional shareholders impacts the market for corporate control. We find that target firms with short-term shareholders are more likely to receive an acquisition bid but get lower premiums. This effect is robust and economically significant: Targets whose shareholders hold their stocks for less four months, one standard deviation away from the average holding period of 15 months, exhibit a lower premium by 3%. In addition, we find that bidder firms with short-term shareholders experience significantly worse abnormal returns around the merger announcement, as well as higher long-run underperformance. These findings suggest that firms held by short-term investors have a weaker bargaining position in acquisitions. Weaker monitoring from short-term shareholders could allow managers to proceed with value-reducing acquisitions or to bargain for personal benefits (e.g., job security, empire building) at the expense of shareholder returns.

The attention given to shareholder characteristics in the M&A literature has mostly been restricted to the role played by institutional differences between classes of shareholders (e.g., firm managers, affiliated blockholders, or institutional investors). We focus on differences in investment horizon, and we put forward explanations as to why they are likely to be a major source of variation in the value of a takeover deal. A longer investment horizon of the shareholders implies a higher ability to hold out in the merger negotiation. At the same time, shareholders with longer investment horizon have bigger incentives to monitor. This means that firm managers are less likely to trade off shareholder returns for their own personal benefit. We show that investment horizon affects the affordability of takeovers. Short-term shareholders in the target enhance the likelihood of a takeover and lower its cost. At the same time, short-term shareholders in the bidder give managers more leeway to carry out value-reducing acquisitions. Long-term investors defend management from takeovers (by making bids more expensive) but also prevent overbidding and value-reducing acquisitions. In future work it is worth investigating the impact of shareholder horizons on other aspects of corporate control. Given our findings, we expect that shareholders’ horizon will affect the outcome of other events in which shareholder monitoring and bargaining constitute major features (such as proxy fights, going private transactions, or self-tender offers). At a more general level, it would be interesting to study the determinants of a firm's shareholder base. We believe that long-term capital is scarce, because of the problems discussed in the literature (e.g., the importance of liquidity needs or the distortions of incentives caused by delegated portfolio management). Hence long-term capital cannot have a major presence in all firms. What are the key attributes that attract long-term capital to a company or that persuade existing shareholders to hold their investments for longer periods? This is an open question left for future research.