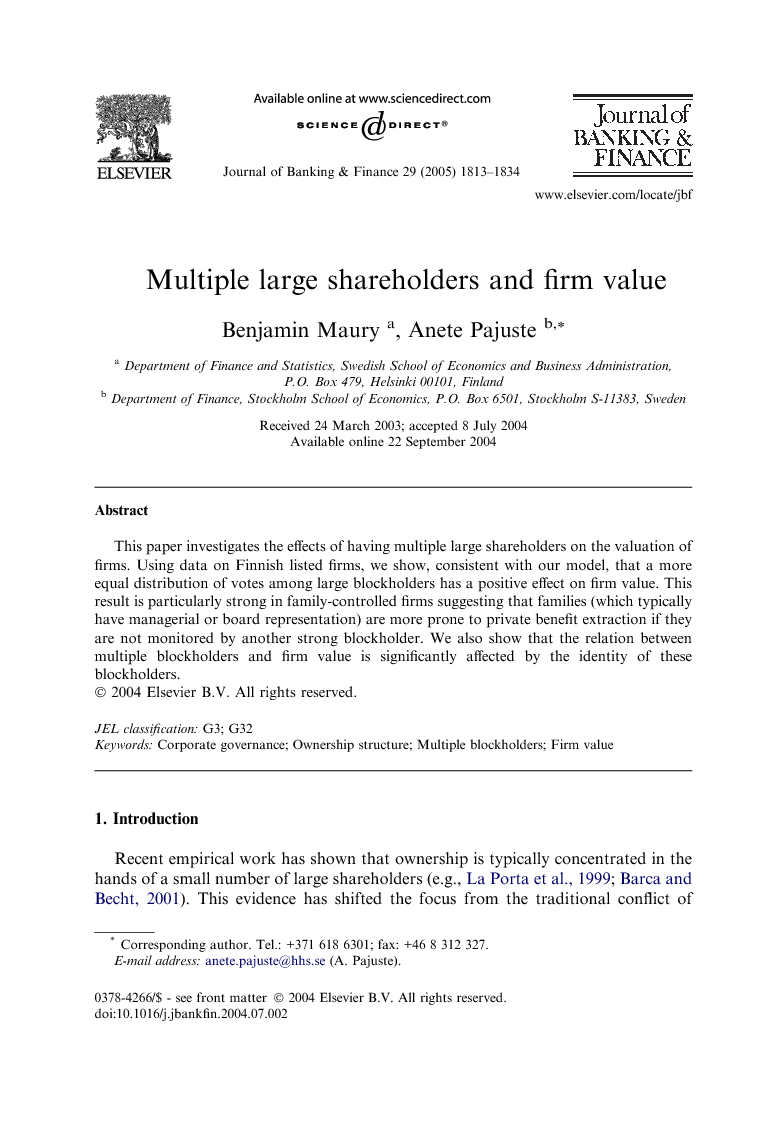 This paper investigates the effects of having multiple large shareholders on the valuation of firms. Using data on Finnish listed firms, we show, consistent with our model, that a more equal distribution of votes among large blockholders has a positive effect on firm value. This result is particularly strong in family-controlled firms suggesting that families (which typically have managerial or board representation) are more prone to private benefit extraction if they are not monitored by another strong blockholder. We also show that the relation between multiple blockholders and firm value is significantly affected by the identity of these blockholders.

Recent empirical work has shown that ownership is typically concentrated in the hands of a small number of large shareholders (e.g., La Porta et al., 1999; Barca and Becht, 2001). This evidence has shifted the focus from the traditional conflict of interest between managers and dispersed shareholders (Berle and Means, 1932) towards an equally important agency conflict between large controlling shareholders and minority shareholders. On the one hand, large shareholders can benefit minority shareholders by monitoring managers (Shleifer and Vishny, 1986 and Shleifer and Vishny, 1997). On the other hand, large shareholders can be harmful if they pursue private goals that differ from profit maximization or if they reduce valuable managerial incentives (Shleifer and Vishny, 1997; Burkart et al., 1997). In this paper, we address a different question: In which way do multiple large shareholders, as opposed to just one large shareholder, benefit or harm minority shareholders? Outside the United States, the presence of several large shareholders1 with substantial blocks of shares is common (Barca and Becht, 2001). Data on 5232 European companies collected by Faccio and Lang (2002) show that 39% of firms have at least two blockholders that hold at least 10% of the voting rights, and 16% of firms have at least three blockholders. Therefore, it is important to study the allocation of control between multiple large shareholders, as well as its impact on firm performance. The theoretical literature provides models in which multiple blockholders compete for control (Bloch and Hege, 2001), monitor the controlling shareholder (Winton, 1993, Pagano and Röell, 1998 and Bolton and Von Thaden, 1998), and form controlling coalitions to share private benefits (Zwiebel, 1995, Pagano and Röell, 1998, Bennedsen and Wolfenzon, 2000 and Gomes and Novaes, 2001). Empirical evidence on the effect of multiple large shareholders on firm performance has been limited. For Italy, Volpin (2002) provides evidence that valuation is higher when control is to some extent contestable as in the case in which a voting syndicate controls the firm. Lehman and Weigand (2000) report that the presence of a strong second largest shareholder enhances profitability in German listed companies. Faccio et al. (2001) test the effect of multiple large shareholders on dividends. They find that the presence of multiple large shareholders dampens expropriation in Europe (due to monitoring), but exacerbates it in Asia (due to collusion). Most of these empirical studies focus on the simple presence of multiple blockholders, and not on the characteristics of individual blockholders. We present a simple model in which multiple blockholders can have two different roles in firms. On the one hand, by holding a substantial voting block, a blockholder has the power and the incentives to monitor the largest shareholder and therefore the ability to reduce profit diversion. On the other hand, the blockholder can form a controlling coalition with other blockholders and share the diverted profit. One of the key contributions of this paper is the derivation of conditions under which the diversion of profits can be higher in firms with multiple blockholders than in firms with a single blockholder. Related to the first role, we hypothesize that firm value is positively affected by the ability to challenge the largest block, i.e., by contestability. Related to the second role, we hypothesize that firm value is negatively affected by the presence of blockholders, who, by colluding, can increase the efficiency of private benefit extraction. Using a sample of 136 non-financial Finnish listed companies that have at least one large shareholder with more than or equal to 10% of the votes, we find that the contestability of the largest shareholder’s voting power (using different measures) has a positive effect on firm value, as measured by Tobin’s Q. The data show that firm value increases when the voting power is distributed more equally. The contestability of control power is particularly important in family-controlled firms. As families typically have managerial or board representation, this result suggests that firm value can decrease if the outsiders’ ability to monitor the insiders is low. Interestingly, we find that a higher voting stake by another family is negatively related to firm value in family-controlled firms, whereas a higher voting stake held by another non-family owner, typically a financial institution, is positively related to firm value in family-controlled firms. These results suggest that the incentives to collude with the largest shareholder or to monitor the largest shareholder are significantly affected by the type of the blockholder. Consistent with our model, we explain this result by suggesting that some coalitions (e.g., two families) can make profit diversion easier. Meanwhile in other coalitions, expropriation can be more difficult. The paper proceeds as follows. Section 2 presents a model on the effects of multiple large shareholders on firm value, and derives testable hypotheses. Section 3 describes the data set and variables. Section 4 presents regression results. Section 5 offers robustness checks, and Section 6 concludes.

This paper examines the role of multiple large shareholders on firm performance using a panel of 136 non-financial Finnish firms during 1993–2000. We propose that even though the simple presence of multiple blocks can have a positive effect on firm value, it is not always the case. The link between control structures with multiple blocks and the valuation of firms is driven by the relative size, as well as the identity of the blockholders. First, using different measures of control contestability, we confirm the predictions of our simple theory that a more equal distribution of voting rights enhances firm value. The effect is much stronger in family (insider) controlled firms. Insiders are expected to be better in hiding profit diversion, and extracting more private benefits, if their actions and power cannot be challenged. Second, we corroborate previous findings that firm value decreases if the largest shareholder holds more votes than equity rights. Finally, we find that a higher voting stake held by another family reduces firm value in family-controlled firms, whereas a higher voting stake held by another non-family owner improves firm value in family-controlled firms. These results suggest that the incentives to collude with or to monitor the controlling shareholder are affected by the type of the individual owner. These results fit with our theoretical argument that certain blockholders jointly can reduce the cost of extracting private benefits. The evidence presented in this paper expands our understanding of the link between firm’s control structure and its performance, by showing that multiple blockholders can play an important role in corporate governance. Taken as a whole, our results suggest that the contestability of the leading shareholder’s power can limit the expropriation of minority shareholders. Comparisons of the relation between control contestability and firm performance in countries with different degrees of investor protection seem an interesting topic for further research.