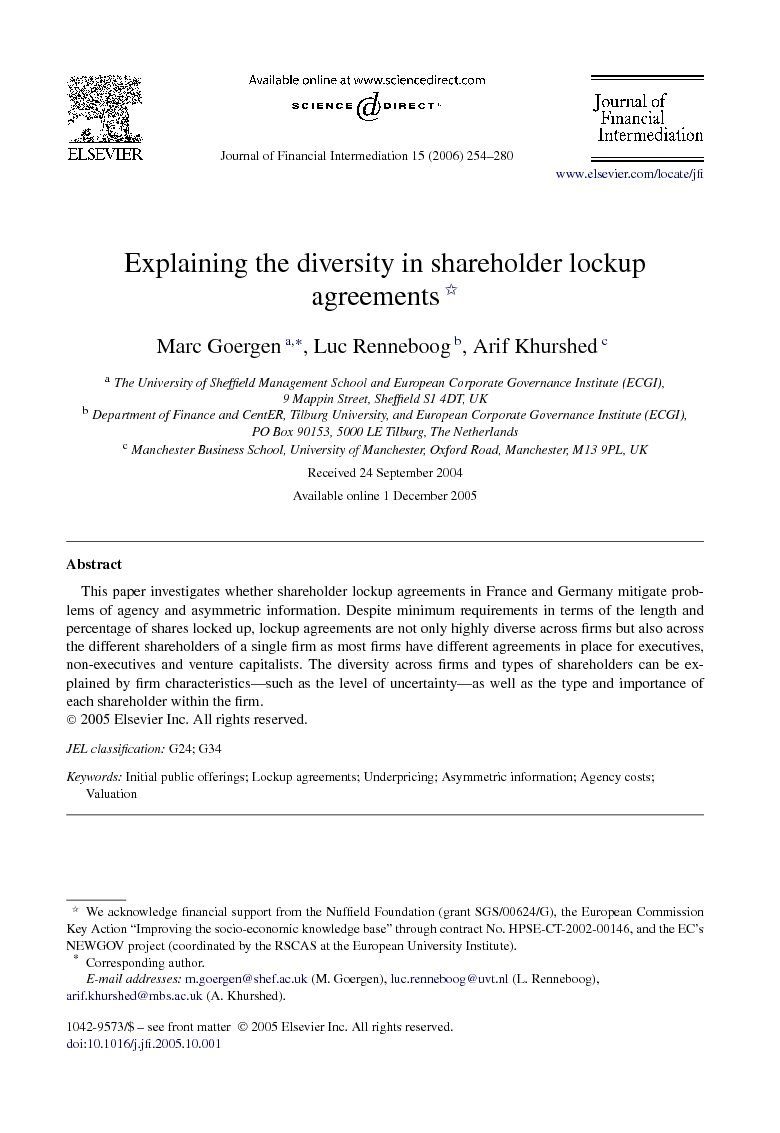 This paper investigates whether shareholder lockup agreements in France and Germany mitigate problems of agency and asymmetric information. Despite minimum requirements in terms of the length and percentage of shares locked up, lockup agreements are not only highly diverse across firms but also across the different shareholders of a single firm as most firms have different agreements in place for executives, non-executives and venture capitalists. The diversity across firms and types of shareholders can be explained by firm characteristics—such as the level of uncertainty—as well as the type and importance of each shareholder within the firm.

Whereas virtually all the published literature has focused on lockup contracts in UK and US IPOs, this paper contributes to the IPO-literature by analyzing these contracts for IPOs on the French Nouveau Marché and the German Neuer Markt. Contrary to UK IPOs and to most US IPOs, firms going public on the French and German new markets are subject to compulsory lockups. While the German market imposes a minimum lockup of 6 months on all the pre-IPO shareholders' shares retained immediately after the flotation, the French market requires insiders to be locked up with 100% of the shares for 6 months or 80% of the shares for 1 year. About 52% of the shares that are locked up and held by the pre-IPO shareholders of French firms are subject to lockups which exceed the minimum requirement. For Germany, the equivalent percentage is 59%. Whereas negative abnormal returns on the day of the expiry of lockup contracts have been reported for the US, UK research has not found a significant market reaction. This paper confirms the absence of significantly abnormal returns at the expiry for the main Continental European markets. We also provide an important contribution to the lockup literature as we examine lockup contracts at the shareholder level rather than at the firm level. Consequently, we are able to study more refined hypotheses about the differences in lockup contracts across shareholders, across firms and across countries. We demonstrate that lockup contracts are not only determined by firm characteristics but also depend on the shareholder type. The paper uncovers some marked differences in terms of the role of venture capitalists in German and French IPOs. First, there is a significantly higher proportion of French firms that are VC-backed. Second, VCs in French firms are more likely to have board representation (via executive and non-executives) than their counterparts in German firms. Third, French VCs sell a smaller fraction of their holding at the flotation. We find that the shareholders of firms characterized by more uncertainty (small and young firms) are locked up for longer and for a higher proportion of their shares in both Germany and France. When the free-float at the IPO is high, more stringent lockup contracts are used (especially by the executive directors) to reduce potential agency problems. Venture capitalists in German IPOs prefer a quick exit after the flotation as they have short lockups (usually identical to the legal minimum). In contrast, founders, and executive and non-executive directors who retain shares after the flotation are locked up for longer periods. In France, the situation is similar: VCs are unlikely to be subject to lockup contracts exceeding the minimum requirements. Furthermore, they tend to be subject to the less stringent of the minimum requirements. We have also examined whether the presence of a venture capitalist has a negative impact on the lockup duration as it is possible that VCs certify firm quality and thus reduce the need for long lockups on other types of shareholders. We find that this certification role is not supported by our analysis. We also show that German IPOs with reputable underwriters are subject to more stringent lockup contracts. This implies that underwriters protect their reputational capital rather than provide a certification role. Also for Germany, we do not find any evidence that high-quality firms opt for more stringent lockup agreements and are thus able to revise their offer price upwards or reduce the degree of underpricing. In contrast, we find that, in France, the market perceives a more stringent lockup as a signal of firm quality as it is a substitute to the initial underpricing. The paper shows that although the French regulator gives firms a choice of two minimum lockup specifications, firms are clearly not indifferent between the two options. Overall, the lockup agreement of 6 months covering all of the shares is perceived to be less stringent as it is chosen by firms with less uncertainty about their value. For VC-backed firms, all the shareholders tend to be locked up although the probability that VCs themselves are subject to lockup contracts stricter than the minimum requirements is small. Young and small firms tend to use more stringent lockup contracts. Finally, we do not find any evidence that firms that signal their superior quality by locking up their shareholders for longer or with a higher proportion of their shares are able to revise their offer price upwards.