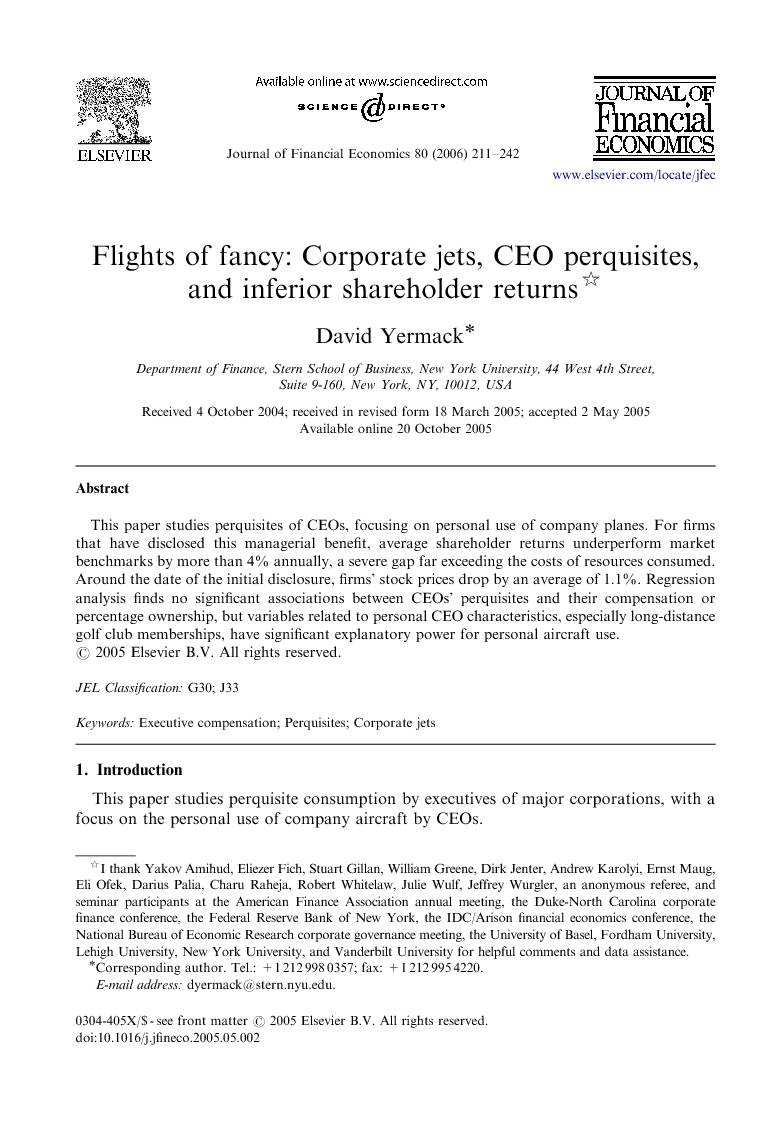 This paper studies perquisites of CEOs, focusing on personal use of company planes. For firms that have disclosed this managerial benefit, average shareholder returns underperform market benchmarks by more than 4% annually, a severe gap far exceeding the costs of resources consumed. Around the date of the initial disclosure, firms’ stock prices drop by an average of 1.1%. Regression analysis finds no significant associations between CEOs’ perquisites and their compensation or percentage ownership, but variables related to personal CEO characteristics, especially long-distance golf club memberships, have significant explanatory power for personal aircraft use.

This paper studies perquisite consumption by CEOs in major companies, focusing on personal use of company aircraft, the most costly and most frequently disclosed managerial fringe benefit. The data indicate that more than 30% of Fortune 500 CEOs in 2002 were permitted to use company planes for personal travel, up from a frequency below 10% a decade earlier. The most striking results in the paper concern the association between CEO perk consumption and company performance. When personal aircraft use by CEOs is first disclosed to shareholders, company stock prices drop by about 1.1%. However, this value loss does not fully anticipate the future poor performance of such companies. Regression analysis indicates that firms permitting CEO aircraft use underperform market benchmarks by about 400 basis points per year, a severe shortfall that cannot be explained simply by the costs of the resources consumed. Regression models of CEO personal aircraft do not show significant associations with compensation, ownership, or monitoring variables as predicted by theory. However, variables that measure personal characteristics of CEOs have marked associations with perk consumption. Especially strong associations appear to exist between personal aircraft use and a CEO's golfing activity, as an indicator variable for long-distance golf club memberships has both strong magnitude and significance. While all of the paper's analysis is based upon companies’ disclosures of the CEO aircraft perk in annual proxy statements, vagueness and loopholes in the disclosure regulations mean that the data is not comprehensive; indeed, disclosure represents, to at least a certain extent, a choice variable for some firms. I find that disclosure is much higher for firms that are targets of shareholder lawsuits for securities fraud, and that disclosure increases in 2001 and 2002, around the time of the Sarbanes-Oxley Act and other regulatory measures that seek to increase the transparency of firms’ SEC filings. These patterns suggest that the rising trend in aircraft perk disclosure over the sample period resulted at least partly from more accurate compliance with the SEC's reporting regulations. After the aircraft perk is first disclosed, firms release greater rates of bad news to shareholders in the form of writeoffs and negative earnings surprises. These patterns are consistent with a hypothesis of strategic disclosure behavior, whereby managers minimize the bad news flowing to the market until after they have secured access to desirable fringe benefits.