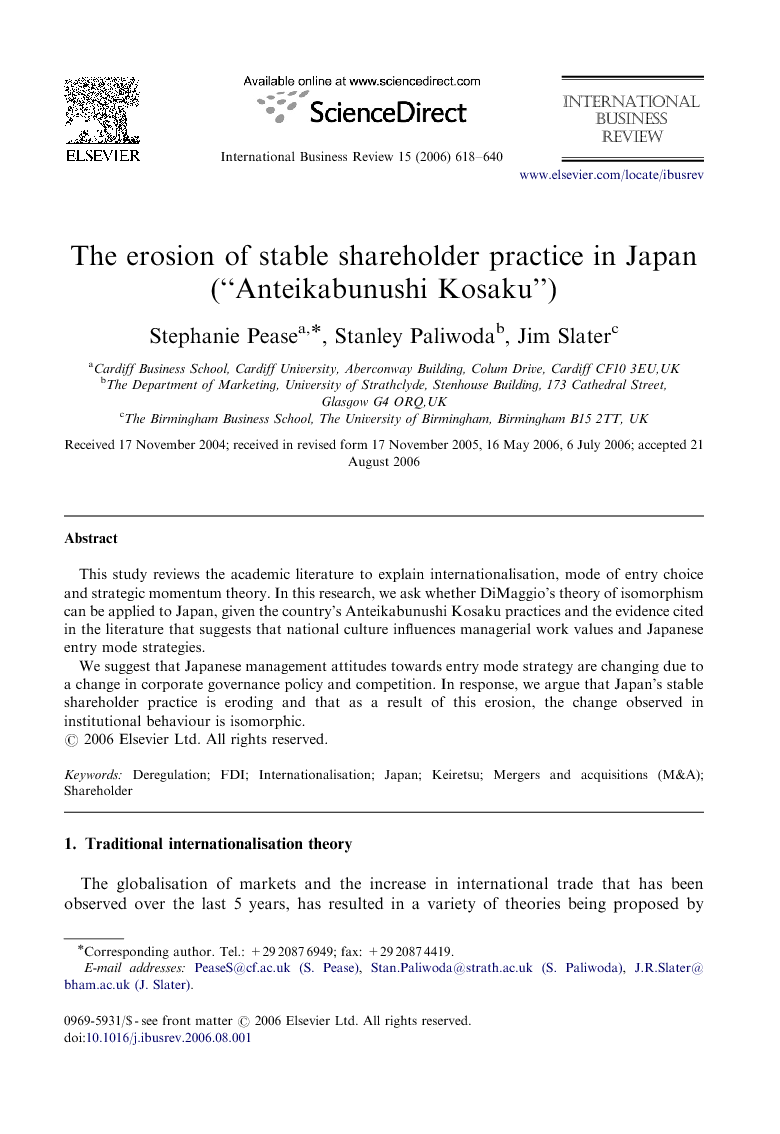 This study reviews the academic literature to explain internationalisation, mode of entry choice and strategic momentum theory. In this research, we ask whether DiMaggio's theory of isomorphism can be applied to Japan, given the country's Anteikabunushi Kosaku practices and the evidence cited in the literature that suggests that national culture influences managerial work values and Japanese entry mode strategies. We suggest that Japanese management attitudes towards entry mode strategy are changing due to a change in corporate governance policy and competition. In response, we argue that Japan's stable shareholder practice is eroding and that as a result of this erosion, the change observed in institutional behaviour is isomorphic.

The globalisation of markets and the increase in international trade that has been observed over the last 5 years, has resulted in a variety of theories being proposed by academics to explain why companies may choose to transplant their businesses abroad. The explanation posited by scholars as to why companies internationalise is essentially encompassed within five key theories. Industrial organisation theory originates from the work of Stephen Hymer in 1960. Hymer (1960) had studied the international operations of national firms and suggested that if organisations wanted to be successful abroad then they needed to ascertain a source of competitive advantage over domestic firms in that foreign marketplace, since he believed that domestic firms were better placed to meet local market demands, given their knowledge of the market and its customers (Hymer, 1960). More recently, Hymer's contribution to the international business literature has been reaffirmed in a collection of papers which appeared in the International Business Review special issue entitled: “Stephen Herbert Hymer and/on the (Theory of the) MNE and International Business” ( Pitelis, 2006). In this 2006 special issue, a number of scholars revisited Hymer's contribution to international business theory. For example, Strange and Newton (2006) highlighted the externalisation contribution proposed in Hymer's theory ( Dunning, 2003; Pitelis, 2002; Strange & Newton, 2006), whilst Buckley highlighted the “three phases, one approach” component of Hymer's thinking ( Buckley, 2006). Over the years, Hymer's contribution to international business theory has been appraised and critiqued by a number of scholars. For example, Dunning extended Hymer's theory ( Dunning (1977), Dunning (1979) and Dunning (1980)) and put forward a model to explain the international development path pursued by firms, describing the ownership, locational and the incentives to internalisation that could be obtained through foreign direct investment and the changing patterns of international production. In a reflective contribution, he later reappraised the applicability of his eclectic paradigm and proposed some extensions to the model to symbolise the changes that had taken place in what he described as the “age of alliance capitalism” ( Dunning (1977), Dunning (1979), Dunning (1980), Dunning (1988), Dunning (1993), Dunning (1995) and Dunning (2000); Dunning & Narula, 1997; Dunning & Pitelis, 2003). Itaki then questioned whether the ownership component of the model was redundant ( Itaki, 1991), whilst Brouthers, Brouthers, and Werner (1999) had conducted empirical studies to investigate whether the model can be used to evaluate the suitability and choice of entry modes among small firms. Somlev and Hoshino (2005) looked at the way locational factors influence mode of entry choice by analysing the behaviour of 405 Japanese manufacturing MNEs and highlighted the importance of locational variables on mode of entry strategy. Oxelheim, Randøy, and Stonehill (2001) suggested that the finance-specific factors needed to be considered in the OLI framework, since they postulated that FDI activity is more likely when credit ratings are high, given that an MNE's financial capabilities and resources impact on an organisation's competitive position ( Oxelheim et al., 2001). The importance of network relationships and inter-firm alliances have been integrated into the eclectic framework through the work conducted by scholars such as Scott-Kennel, who have measured through an exploratory study, the transfer of firm-specific advantages and resources at the subsidiary level ( Scott-Kennel & Enderwick, 2004). Internationalisation theory offers an alternative view of the entry mode decision-making process. For example, the behavioural model proposed by Johanson and Vahlne develops Penrose's original argument on the endogenous growth that firms experience through the knowledge creation process and the resource-based perspective (Penrose, 1959; Pitelis, 2004). The Johanson and Vahlne studies describe internationalisation as a sequential process, which results from a number of stages. In this model, the authors suggest that knowledge development and market commitment increase as the international process evolves (Johanson & Vahlne (1977), Johanson & Vahlne (1990) and Johanson & Vahlne (2006)). The knowledge acquisition model proposed by Johanson and Vahlne was later critiqued by Forsgren who argued that: … the model builders apply a more narrow interpretation of learning than that allowed by the literature, which limits the ability of the model to explain certain forms of internationalisation. It also claimed that perceiving a firm to be a loosely coupled organisation causes some problems in relation to the model's possibility to predict internationalisation behaviour …(Forsgren, 2002, p. 257).

The mode of entry strategy chosen by MNEs is a strategic decision that dominates most board rooms. However, as we have seen from the DiMaggio and Powell studies (DiMaggio & Powell, 1983), population groups can and do exert similar behavioural responses when placed in an environment which is affected by macro forces. For these reasons, if we believe the argument that globalisation is more a reality than a myth, (Yip, 1992) it could be argued that the globalisation of markets is leading companies to converge their attitudes towards business strategy in response to macro impact and the harmonisation of political and regulatory processes between and across countries. This is an interesting proposition given the marketing literature on consumer–buyer behaviour and culture clearly demonstrates that population groups are different with respect to the “wants” and “needs” that they exert within their social setting. Not surprisingly, this raises interesting questions about the way senior managers formulate and implement strategy, given the differences in personality that dictate behavioural response and in light of the very many types of mode of entry route that can be pursued by firms. Datasets produced by UNCTAD (UNCTAD, 2000, 2005) have demonstrated the increased levels of foreign direct investment that have taken place globally. They have also shown that M&A activity across industrial segments remains active and that merger continues to be a popular strategy pursued by MNEs. The isomorphic effect of DiMaggio's theory (DiMaggio & Powell, 1983), has also been demonstrated through the strategic momentum behaviours and the high degree of merger repetition that has been observed among Western firms. This has been empirically reiterated in the literature, through the studies of scholars such as Amburgey and Davis, who have looked specifically at behaviour and entry mode type (Amburgey & Miner, 1992; Davis et al., 2000). However, despite these findings, the literature also offers numerous examples to suggest that not all behaviour is isomorphic. In the case of Japan a number of scholars have cited examples of the way Japan's stable shareholder policies have made Japanese business systems different from Western practices and management thinking (Gerlach, 1992; Okumura, 2000) These differences have, one could argue, prevented isomorphic mode of entry behaviours from taking place because of the influence that national culture has traditionally exerted on corporate governance, regulation, policy and business decisions. For, as our data have shown, this was definitely true in the mid 1980s, when the number of mergers and acquisitions that were characteristic of Japanese firms amounted to less than 220 deals (Nomura Securities Co. Ltd., 2004). Therefore, we suggest that changes in corporate governance policy and macro forces have reshaped the way that Japanese managerial teams formulate and implement strategy when it comes to making decisions about entry mode choice. Further, we suggest that in the current economic climate the behaviour exerted is isomorphic. The findings from our research suggest that merger activity is taking place globally and that Japanese MNEs, irrespective of their culture, are behaving in a similar way to global corporations when faced with similar pressures. The high degree of M&A activity that characterises Japanese MNEs over the last decade offers evidence to suggest that consolidation strategies are becoming more acceptable and in response, Anteikabunushi Kosaku practices must be eroding. This is accelerating the rate of merger repetition observed between firms globally and is having an isomorphic effect on Japan's entry mode choice. This erosion is significant for two reasons. Firstly, because despite the differences that exist in cross-cultural social psychology, Japanese corporations are changing their organisational behaviour to allow them flexibility over entry mode choice. Secondly, this is taking place in face of the conflicting literature on the market convergence/divergence opportunity associated with conducting business in what could be described as the borderless world of global marketing. The literature offers a number of scientific explanations to justify methodology type and to explain the “unobservable constructs” (Friedman, 1953; Godfrey & Hill, 1995) through which “the boundaries between phenomenon and context” are not made clear (Friedman, 1953; Godfrey & Hill, 1995; Yin, 1994). Case study methodologies have been described in the literature as a suitable method to apply when building organisational theory. The findings from our research have shown that case study methodology research can be used to identify the “unobservable constructs”, sometimes immersed in culture, to measure institutional change in Japan. Research will always be limited by the constraints of the particular research method used. This study has limitations because it has used only datasets obtained from secondary sources to develop the M&A assumption constructs for measuring changes in management style in Japan. Future research should focus on conducting some interview research to investigate the link between merger repetition and isomorphic behaviour, using the parameters described in the cultural distance models outlined in the literature. A second study could investigate whether merger repetition and isomorphic effects are observed across the different sectors of Japanese industry. For example, are certain sectors more open to pursuing M&A entry types? Our study could be extended to investigate whether the trends observed in M&A activity differ between sector types. For example, do we see the same trends repeated in industries where the literature offers evidence to suggest that international expansion has been slow? Will Japan's attitude to internationalising its R&D activities change, as more companies perceive M&A to be an acceptable entry route (Belderbos (2001) and Belderbos (2003))? If they do, what does this tell us about Japan's changing patterns in international investment and how would this change in management behaviour then contribute to the market convergence debate?