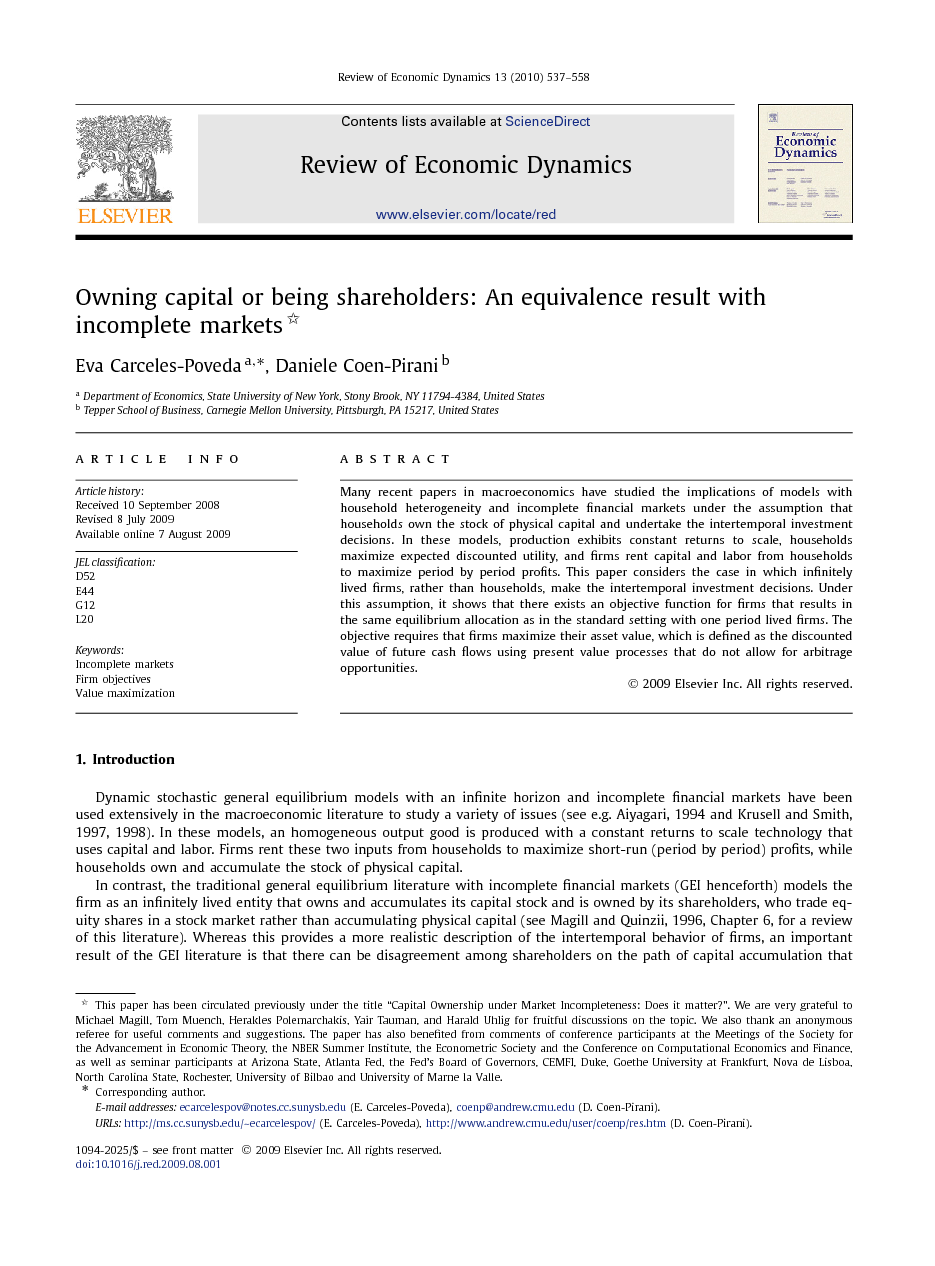 Many recent papers in macroeconomics have studied the implications of models with household heterogeneity and incomplete financial markets under the assumption that households own the stock of physical capital and undertake the intertemporal investment decisions. In these models, production exhibits constant returns to scale, households maximize expected discounted utility, and firms rent capital and labor from households to maximize period by period profits. This paper considers the case in which infinitely lived firms, rather than households, make the intertemporal investment decisions. Under this assumption, it shows that there exists an objective function for firms that results in the same equilibrium allocation as in the standard setting with one period lived firms. The objective requires that firms maximize their asset value, which is defined as the discounted value of future cash flows using present value processes that do not allow for arbitrage opportunities.

This paper characterizes the competitive equilibrium in a class of incomplete market economies where firms make the intertemporal investment decision and households are subject to general portfolio restrictions. In particular, it shows that economies with value maximizing firms that own the stock of physical capital have the same equilibrium allocations as the economies recently considered in the macroeconomic literature, in which firms rent the capital stock from the households on a period by period basis. Thus, our work can be viewed as establishing a link between the traditional GEI literature and the quantitative macroeconomic literature with incomplete markets. Whereas value maximization is a natural objective, interesting issues may arise when the stock of physical capital does not coincide with the market value of the firm. In this case, otherwise similar incomplete market models might lead to different qualitative and quantitative implications with respect to the ones established in the macroeconomic literature. For example, authors like Aiyagari (1994) and Krusell and Smith (1997, 1998) have shown that imperfect risk sharing in the standard setting can lead to an increase in the aggregate capital stock due to precautionary savings. In contrast, if aggregate household wealth, which is equal to the stock market value of firms, is not the same as the aggregate capital stock, precautionary savings might not necessarily be reflected in a higher capital accumulation. This point is illustrated by Carceles-Poveda (2008), who studies the quantitative implications of alternative objective functions for firms in a two agent model with incomplete markets. In such a framework, it is shown that the aggregate capital stock is very sensitive to the assumption on firm’s objectives. Another context in which the fact that the aggregate capital stock and the value of the firm may not coincide could be particularly important is the overlapping generations setting with production. For example, Magill and Quinzii (2003)consider such a setting with irreversible capital investment and show that the economy’s capital stock may converge to the efficient Golden rule steady state rather than to the suboptimal steady state. The examples above suggest that the analysis of dynamic models featuring an explicit stock market is likely to provide new insights into the functioning of real-world economies. Thus, while our paper has provided sufficient conditions under which economies with static and dynamic firms behave in a similar manner, we think that it is still worthwhile exploring the contexts in which this equivalence breaks down. We leave this difficult task to future research.