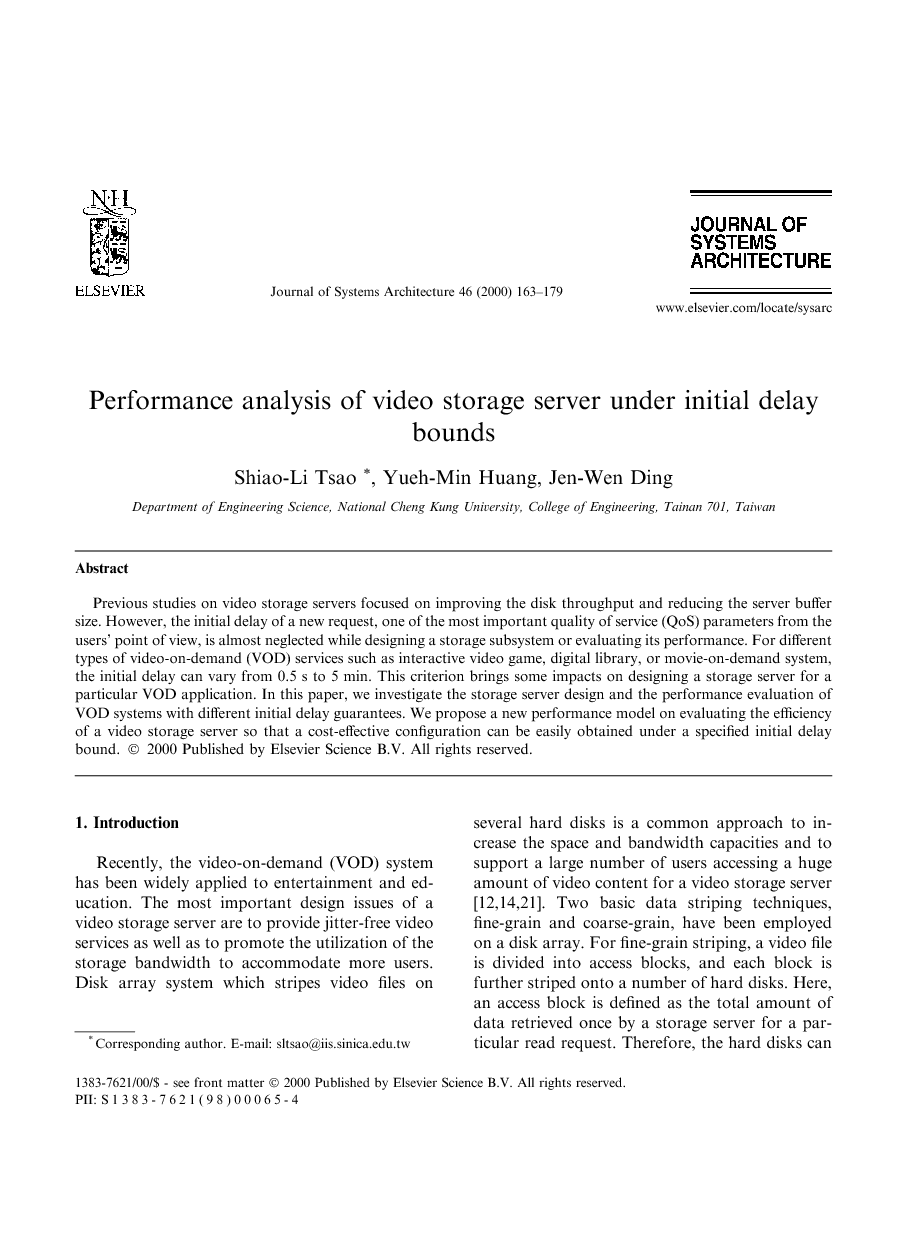 Previous studies on video storage servers focused on improving the disk throughput and reducing the server buffer size. However, the initial delay of a new request, one of the most important quality of service (QoS) parameters from the users' point of view, is almost neglected while designing a storage subsystem or evaluating its performance. For different types of video-on-demand (VOD) services such as interactive video game, digital library, or movie-on-demand system, the initial delay can vary from 0.5 s to 5 min. This criterion brings some impacts on designing a storage server for a particular VOD application. In this paper, we investigate the storage server design and the performance evaluation of VOD systems with different initial delay guarantees. We propose a new performance model on evaluating the efficiency of a video storage server so that a cost-effective configuration can be easily obtained under a specified initial delay bound.

In this paper, we proposed a new performance model for a video storage server under specified initial delay bounds which are variant for different VOD applications. Our model takes striping strategies, disk scheduling policies, data placement schemes, block sizes, buffer requirement per user and initial delay time into account simultaneously. In that way, a system designer can easily obtain the efficient configuration of a video storage server by applying our proposed model based on the given system parameters. According to simulation results, we remark some summaries. 1. Applying round-robin scheduling on region-based data placement can achieve 20% performance improvement over applying round-robin scheduling alone, but the improvement becomes insignificant while the number of regions is more than 8. The 20% performance improvement is based on the hard disk model adopted in our experiments, and it will be decreased under the hard disk drives with higher bandwidth and less seek time overhead. 2. Applying SCAN scheduling on region-based data placement seems not practical because it improves merely 4% in number of supported users more than applying SCAN alone, but introduces more delay. 3. In general, SCAN scheduling has a better performance on disk throughput than round-robin scheduling. However, for region-based data placement with more than 4 regions, round-robin scheduling achieves a higher number of supported users than SCAN on the same buffer requirement. 4. Coarse-grain striping has the best performance on disk throughput but suffers from long delay while fine-grain striping has fast response time but results in poor disk throughput. The combination of the above two strategies is somehow a good configuration for tight initial delay VOD systems. 5. For a long initial delay or a non-guaranteed initial delay VOD system, the disk throughput is the major dominant factor on the maximal number of supported users by a video storage server. Coarse-grain striping strategy is the best solution in terms of the number of supported users and the buffer requirement.