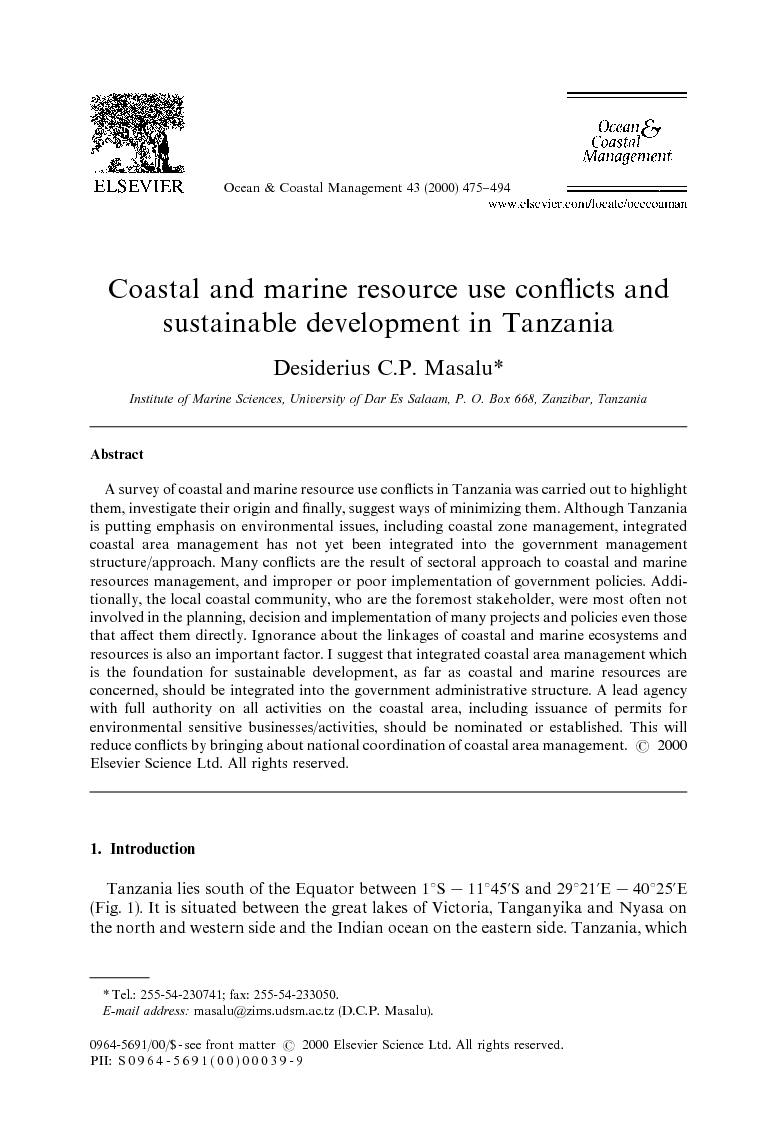 A survey of coastal and marine resource use conflicts in Tanzania was carried out to highlight them, investigate their origin and finally, suggest ways of minimizing them. Although Tanzania is putting emphasis on environmental issues, including coastal zone management, integrated coastal area management has not yet been integrated into the government management structure/approach. Many conflicts are the result of sectoral approach to coastal and marine resources management, and improper or poor implementation of government policies. Additionally, the local coastal community, who are the foremost stakeholder, were most often not involved in the planning, decision and implementation of many projects and policies even those that affect them directly. Ignorance about the linkages of coastal and marine ecosystems and resources is also an important factor. I suggest that integrated coastal area management which is the foundation for sustainable development, as far as coastal and marine resources are concerned, should be integrated into the government administrative structure. A lead agency with full authority on all activities on the coastal area, including issuance of permits for environmental sensitive businesses/activities, should be nominated or established. This will reduce conflicts by bringing about national coordination of coastal area management.

Tanzania lies south of the Equator between 1°S−11°45′S and 29°21′E−40°25′E (Fig. 1). It is situated between the great lakes of Victoria, Tanganyika and Nyasa on the north and western side and the Indian ocean on the eastern side. Tanzania, which is the largest country in East Africa, borders Kenya and Uganda to the north, Rwanda, Burundi and Zaire to the west, and Zambia, Malawi, and Mozambique to the south. Tanzania has a total area of 945,200 km2 and consists of two parts: the mainland with an area of 942,800 km2 and Zanzibar Islands which occupy an area of 2400 km2. The Zanzibar Islands consist of two major Islands, Unguja and Pemba which, respectively, have an area of 1500 and 900 km2.Tanzania has a coastline of about 800 km in length, and five administrative regions are situated along the mainland coast. These include (from north to south) Tanga, Coast, Dar Es Salaam, Lindi and Mtwara. Zanzibar Islands have five administrative regions; Urban West, Unguja North, Unguja South, Pemba North and Pemba South. The coastal plain of Tanzania is relatively narrow, less than 20 km in width at the Kenya border, broadening gradually to a width of 150 km in the vicinity of Dar Es Salaam. Several permanent and seasonal rivers and numerous creeks traverse the coastal plain and flow into the Indian ocean. The permanent rivers include Pangani, Wami, Rufiji, Matandu, Mbemkuru, Lukuledi and Ruvuma (Fig. 2). These rivers influence the coastal environment through the creation of productive brackish water environments in estuaries, maintenance of deltas, tidal flats, beaches and shorelines.Tanzania's continental shelf is narrow (less than 5 km) except in the vicinity of relatively shallow Mafia and Zanzibar channels where the shelf reaches widths of about 60 km. The sediments of the continental shelf are generally sandy but become muddy near river mouths. The coastline is characterized by a mixture of sandy beaches, rocky outcrops, seagrass beds, fringing coral reefs and extensive mangrove stands, particularly around river deltas [1]. Several economically valuable minerals are found along the coast: these including rock salt, kaolin, Limestone, black sand, natural gas, and heavy minerals [2]. Having an appreciably longer coastline, many small and large islands, and conducive equatorial tropical climate, Tanzania is rich in coastal and marine resources. These resources have attracted a rapid growth of the coastal population and an increase of activities which has resulted in the rise of resource use conflicts. The objective of this paper is to survey coastal and marine resource use conflicts focusing on sustainable development in Tanzania, which is a function of the quantity and quality of available resources versus the number of resource users and management approaches. Marine and coastal resource use conflicts though known to exist in Tanzania, have never been surveyed and treated in a single paper as done here.

Several coastal and marine resource use conflicts with different origins exist in Tanzania, despite the government's emphasis on environmental issues, including coastal area management. Management of the Tanzanian coastal area is still sectoral and the main reason for this is that, integrated coastal area management has not been integrated in the government's administrative/management approaches for coastal areas. This has led to little success of the many coastal conservation projects currently going on in the country. Furthermore, the local coastal community has often been ignored in planning, decision, and implementation of coastal area issues. To minimize conflicts and to bring about satisfactory results and good coordination as far as coastal and marine resource use and sustainable development is concerned, the following should be done: