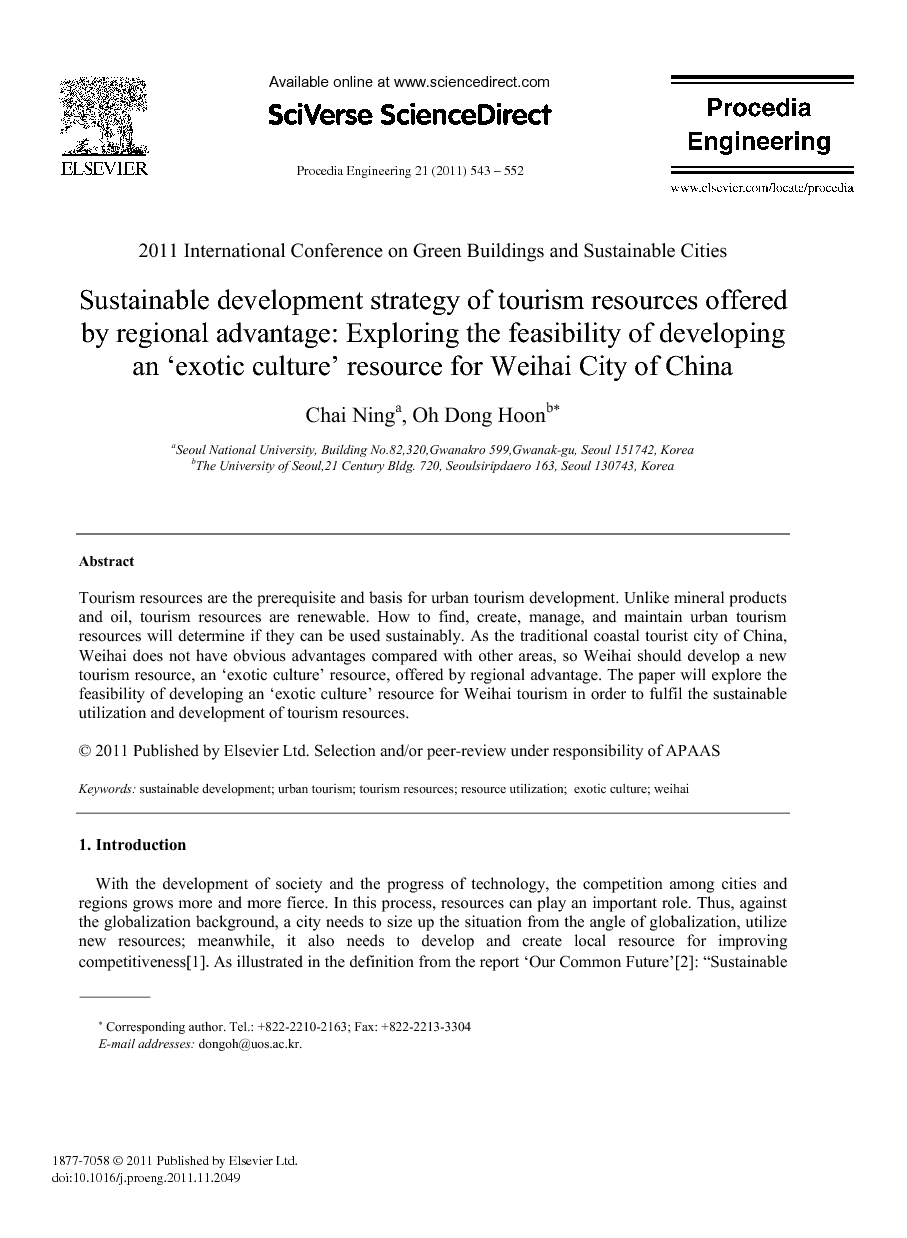 With the development of society and the progress of technology, the competition among cities and regions grows more and more fierce. In this process, resources can play an important role. Thus, against the globalization background, a city needs to size up the situation from the angle of globalization, utilize new resources; meanwhile, it also needs to develop and create local resource for improving competitiveness[1].As illustrated in the definition from the report ‘Our Common Future’[2]: “Sustainable development is development that meets the needs of the present generation without compromising the ability of future generation to meet their own needs”. Krized and Power[3] argue that sustainable development was a global vision although it had been taken up by planners in the U.S. and other developed countries. According to Hopwood[4], the concept of sustainable development is seen to be the result of the growing awareness of the global links between mounting environmental problems, socioeconomic issues dealing with poverty and inequality, and concerns about a healthy future for humanity. It does not mean having less economic development, on the contrary, a healthy economy better able to generate the resources to meet people’s needs, and new investment and environmental improvement often go hand in hand[5]. In the view of Couch and Dennemann[6], while economic development may be a legitimate policy goal, to be sustainable it must be achieved within the context of reducing the ecological footprint. The central value of sustainable development can be boiled down to a balance among the three ‘E’s: environment, economy, and equity[7]. As illustrated in Godschalk[8], sustainable development seeks to reconcile the conflicts among economic development, ecological preservation, and intergenerational equity; three conflicts exist among sustainable development value. The ‘property conflict’ between economic growth and equitable sharing of opportunities arises from competing claims on uses of property as both a private resource and a public good; the ‘resource conflict’ between economic and ecological utility arises from competing claims on the consumption of natural resources and the preservation of their ability to reproduce; the ‘development conflict’ between social equity and environmental preservation arises from competing needs to improve a lot of poor people through economic growth while protecting the environment through growth management. (See Fig.1)It is clear that resources are a strategic factor in the process of sustainable development and the resource conflict exists between ecology and economy. Some resources, such as mineral products and oil, are non-renewable; they will be used up one day, so it is necessary to find new resources to replace them. By contrast, tourism resources, including natural landscape as well as historical and cultural resources, are renewable and can be redeveloped and utilized if they are well managed, maintained, and developed. As a tertiary industry, the sustainable development of the tourism industry is thought to be of paramount importance for urban development; its development relies mainly upon the sustainable utilization of tourism resources. Weihai is one of the traditional coastal tourist cities of China, and it does not have obvious advantages compared with other coastal cities. Increasingly, cities and towns behave in logic of competition in a highly dynamic and complex environment[9], and in such a competitive environment, the policies of local government need to be more market-oriented[10]. To provide Weihai’s tourism industry with sustainable development and competitive advantage, a new tourism resource, an ‘exotic culture’ offered by Weihai’s regional advantage of being near Korea, should be developed and utilized by the local government. For this purpose, the article offers a sustainable development strategy for the tourism industry of Weihai by exploring the feasibility of developing ‘exotic culture’ resources. The article is composed of six chapters. The next chapter analyzes the production mechanism of the ‘exotic culture’ resource; in chapter three, the tourism development situation will be reviewed. Through a questionnaire and field survey, the study uncovers some existing problems and illustrates the necessity of sustainable development. Chapter four is mainly concerned with the effect of ‘Korean culture’ on Weihai. In this chapter, the paper provides an analysis of the development, value, and action of the Korean culture resources of Weihai. Chapter five explores the feasibility of developing the ‘Korean culture’ source for Weihai and suggests implementation programs; chapter six summarizes the whole article.

In order to meet continuous human needs, sustainable development has become the theme of today’s world in different fields. Tourism resources, unlike mineral products and oil, are renewable; thus, they should be continuously developed and utilized to contribute to the sustainable development of urban tourism. This article has taken Weihai city as an example, analyzed the developing state of tourism, and found some existing barriers, using a questionnaire and field survey. The study found that Weihai should develop a new tourism resource, exotic culture, offered by its regional advantage of being near Korea, in order to change the situation of having no competitive tourism advantage compared with other coastal cities in China and achieve sustainable development of urban tourism. For this purpose, the article performed an analysis of the value of Korean culture in Weihai, and it also illustrated the advantages of the Korean tourism model. Through analysis of the Korean culture resource potential in Weihai, this research proposed the following schemes: 1) utilize Korean culture resource reasonably; 2) position the market for Korean culture; 3) make tourism marketing scientific; 4) cooperate with the Korean government in tourism development; and 5) build a sustainable development system of urban tourism, by means of which Weihai’s tourism will be able to develop sustainably. Our research team will keep a close watch on projects related to Korean culture resources promoted by the Weihai city government and distribute questionnaires and field surveys periodically in order to evaluate the situation of Weihai’s tourism development of Korean culture resources.