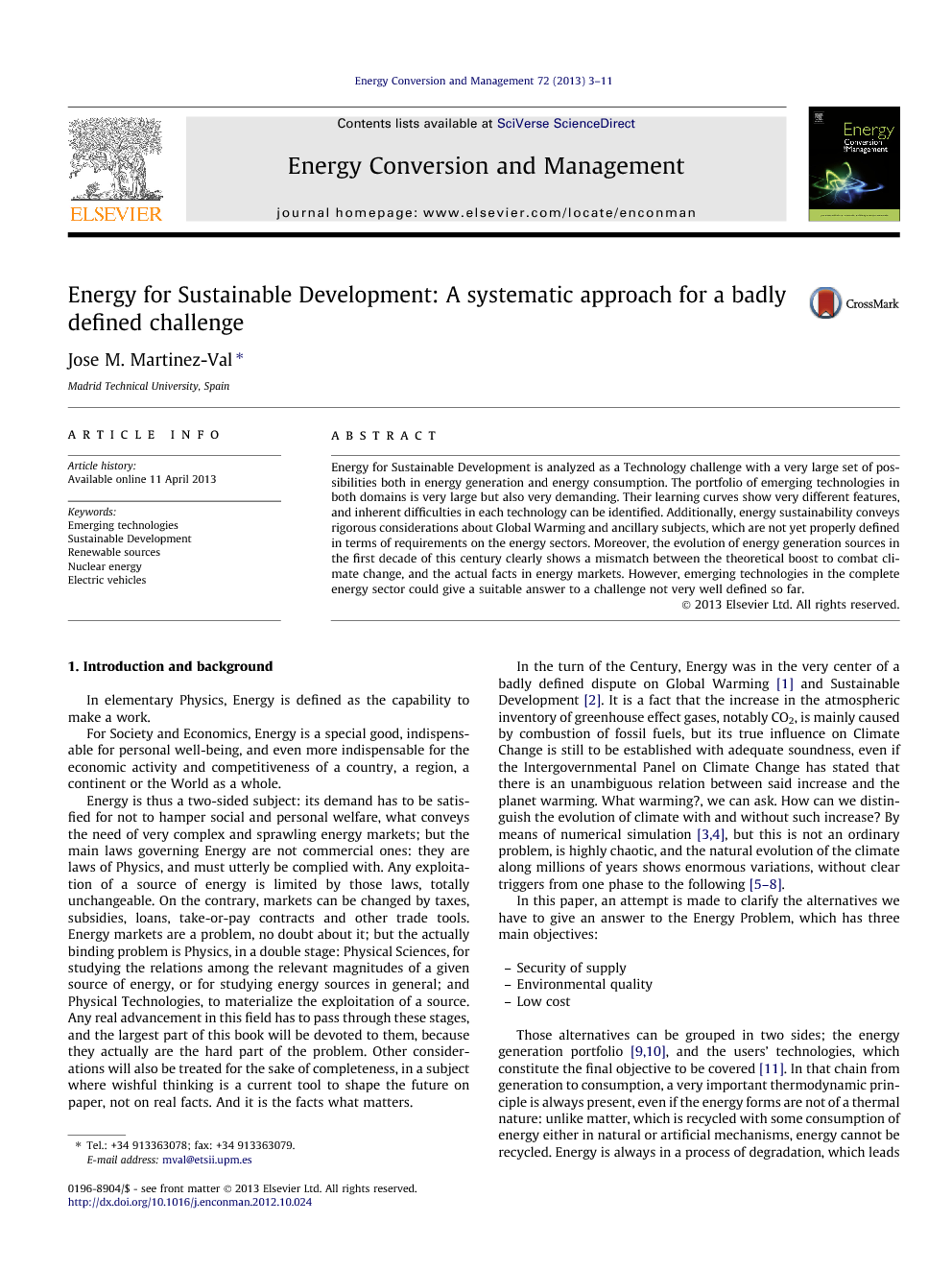 Energy for Sustainable Development is analyzed as a Technology challenge with a very large set of possibilities both in energy generation and energy consumption. The portfolio of emerging technologies in both domains is very large but also very demanding. Their learning curves show very different features, and inherent difficulties in each technology can be identified. Additionally, energy sustainability conveys rigorous considerations about Global Warming and ancillary subjects, which are not yet properly defined in terms of requirements on the energy sectors. Moreover, the evolution of energy generation sources in the first decade of this century clearly shows a mismatch between the theoretical boost to combat climate change, and the actual facts in energy markets. However, emerging technologies in the complete energy sector could give a suitable answer to a challenge not very well defined so far.

In elementary Physics, Energy is defined as the capability to make a work. For Society and Economics, Energy is a special good, indispensable for personal well-being, and even more indispensable for the economic activity and competitiveness of a country, a region, a continent or the World as a whole. Energy is thus a two-sided subject: its demand has to be satisfied for not to hamper social and personal welfare, what conveys the need of very complex and sprawling energy markets; but the main laws governing Energy are not commercial ones: they are laws of Physics, and must utterly be complied with. Any exploitation of a source of energy is limited by those laws, totally unchangeable. On the contrary, markets can be changed by taxes, subsidies, loans, take-or-pay contracts and other trade tools. Energy markets are a problem, no doubt about it; but the actually binding problem is Physics, in a double stage: Physical Sciences, for studying the relations among the relevant magnitudes of a given source of energy, or for studying energy sources in general; and Physical Technologies, to materialize the exploitation of a source. Any real advancement in this field has to pass through these stages, and the largest part of this book will be devoted to them, because they actually are the hard part of the problem. Other considerations will also be treated for the sake of completeness, in a subject where wishful thinking is a current tool to shape the future on paper, not on real facts. And it is the facts what matters. In the turn of the Century, Energy was in the very center of a badly defined dispute on Global Warming [1] and Sustainable Development [2]. It is a fact that the increase in the atmospheric inventory of greenhouse effect gases, notably CO2, is mainly caused by combustion of fossil fuels, but its true influence on Climate Change is still to be established with adequate soundness, even if the Intergovernmental Panel on Climate Change has stated that there is an unambiguous relation between said increase and the planet warming. What warming?, we can ask. How can we distinguish the evolution of climate with and without such increase? By means of numerical simulation [3] and [4], but this is not an ordinary problem, is highly chaotic, and the natural evolution of the climate along millions of years shows enormous variations, without clear triggers from one phase to the following [5], [6], [7] and [8]. In this paper, an attempt is made to clarify the alternatives we have to give an answer to the Energy Problem, which has three main objectives: – Security of supply – Environmental quality – Low cost Those alternatives can be grouped in two sides; the energy generation portfolio [9] and [10], and the users’ technologies, which constitute the final objective to be covered [11]. In that chain from generation to consumption, a very important thermodynamic principle is always present, even if the energy forms are not of a thermal nature: unlike matter, which is recycled with some consumption of energy either in natural or artificial mechanisms, energy cannot be recycled. Energy is always in a process of degradation, which leads to entropy increase and isothermalization. Hence, energy sources are indeed sources, and all of them are exhaustable, including the renewable ones, most of which are secondary energy forms from the Nuclear Fusion energy generated in the Sun by the continuous consumption of protons. Geothermal energy and tidal energy have a different origin, but they are marginal in the full energy budget of our planet. In the users’ side, new technologies are emerging in these years, particularly the Electric Vehicle [12], [13] and [14]. The full energy picture will deeply change if we are able to harness these emerging technologies, but this is not an easy challenge. In the next section, Sustainability will be analyzed on the basis of actual energy data. Section 3 will be devoted to identify where Energy can come from, not in geography but in Physics. This analysis gives us the floor to address the subject of Renewable Energy Sources in Section 4; and to deal with the Nuclear domain in Section 5. Section 6 is devoted to the emerging technologies which consume energy, particularly for transportation. Some conclusions are expressed in Section 7, trying to pave some ways for the future.

Energy is a special good, indispensable for personal well-being, and even more indispensable for the economic activity; and it constitutes a domain where tremendous international stresses take place, including wars and frontier disputes in some cases. Tensions following the Oil Crisis of 1973 led to create the International Energy Agency, but true energy policies are defined at country level. Besides that, the United Nations has taken leading roles in fighting Global Warming (United Nations Framework Convention on Climate Change(UNFCCC) & Conference of the Parties) and Sustainable Development (United Nations Conferences on Sustainable Development, as the one held in Rio in June 2012, 20 years after the first one) and those initiatives are clearly identified as political moves, accompanied by scientific and non-scientific environmentalism, but Technology in its full scope is not present, which is the most serious mistake in all this quest for a better future. Technology should be fostered in two realms: Environment and Energy. In the former, a critical subject is the performance of forests under higher concentration of CO2[28] and [29] but such a policy would have to start by keeping the forest surface if not to enlarge it. On Energy, our review has pointed out that there are a variety of promising lines for developing new devices for energy generation, and freshly emerging technologies consuming energy for satisfying human demands. Someone could say against this statement that there is a lot of international collaboration on Energy R&D, and the biggest example is ITER, but ITER maybe is a counter example, because it does not move forward at a practical scale. On the contrary, Wind-power, with very little boost from international funds, is already contributing to electricity generation in some countries at a relevant level (for instance, 16% in Spain in 2010 and 2011 [40]). Nevertheless, renewable energies have some drawbacks, mainly related to lack of reliability, because they depend on largely variable natural phenomena. Besides that, they mainly are electricity generators, and it can be questioned if they could fully substitute for fossil fuels. The answer lays again in technology. If electric cars are fully deployed and energy storage becomes a commercial reality thanks to technology advancements, the answer to that question is yes. Of course, new technologies will require new materials, as lithium for batteries, but such material will be recycled, not consumed. In summary, Energy for Sustainable Development appears essentially as a Technology challenge with a very large set of possibilities, which can be materialized into devices and applications that will open a new age for activating economy and for minimizing all kinds of environmental effects, from local ones to planetary issues. This is a fantastic quest that will need actions of very different kind, but the most important question to be solved is the technology challenge briefly outlined in the previous pages. Of course, technology is not the only subject to be taken into account for moving in the right track to the future. Financial aspects, environmental questions, societal issues will also be important pieces to pave that road to the future. Very likely, there will be discrepancies on what is the right track towards the new future. In any case, there cannot be doubts about the need for solving the Technology challenge. As always in History, notably recent History, the ones who master technology also master the key to welfare and wellbeing.