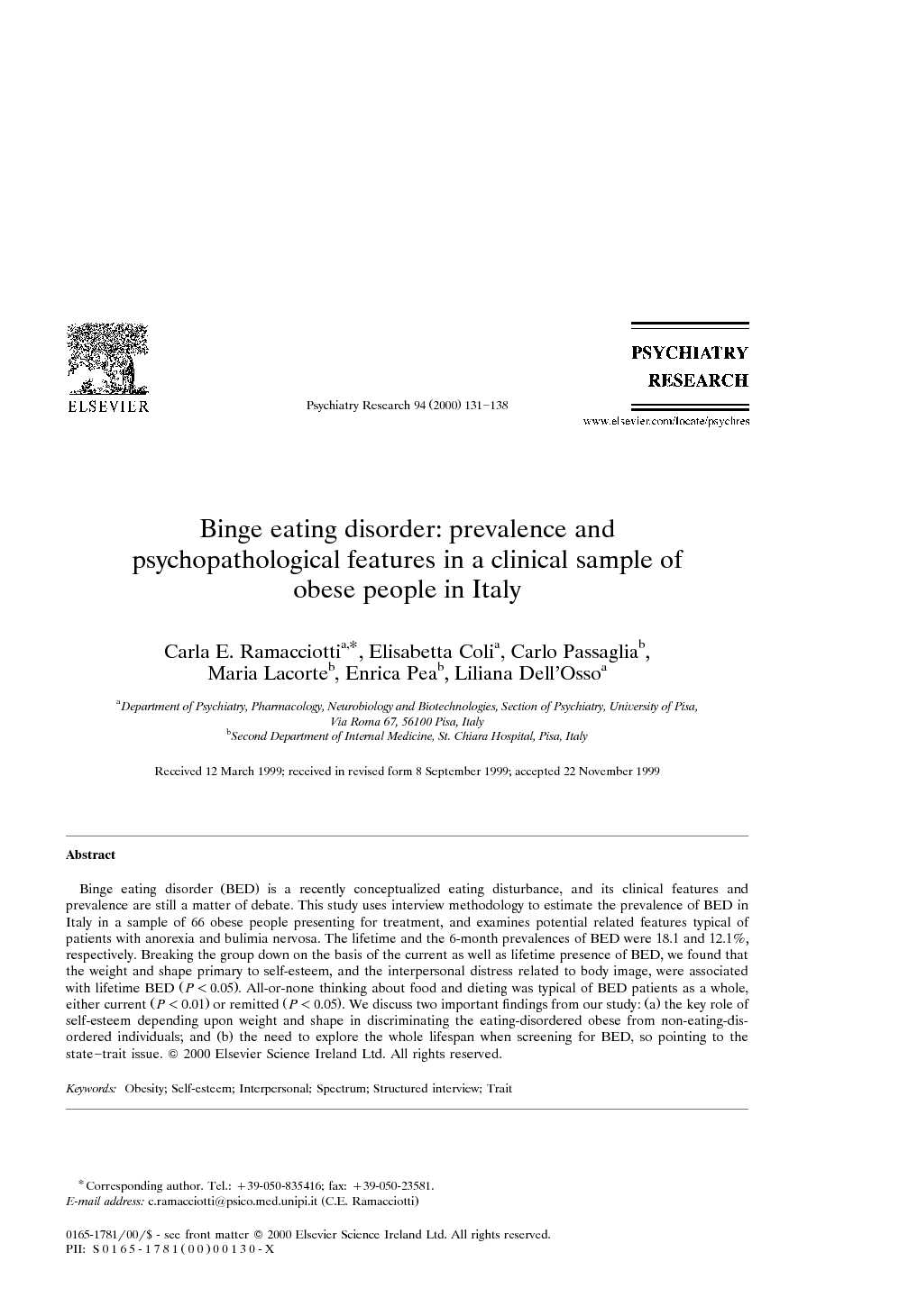 Binge eating disorder (BED) is a recently conceptualized eating disturbance, and its clinical features and prevalence are still a matter of debate. This study uses interview methodology to estimate the prevalence of BED in Italy in a sample of 66 obese people presenting for treatment, and examines potential related features typical of patients with anorexia and bulimia nervosa. The lifetime and the 6-month prevalences of BED were 18.1 and 12.1%, respectively. Breaking the group down on the basis of the current as well as lifetime presence of BED, we found that the weight and shape primary to self-esteem, and the interpersonal distress related to body image, were associated with lifetime BED (P<0.05). All-or-none thinking about food and dieting was typical of BED patients as a whole, either current (P<0.01) or remitted (P<0.05). We discuss two important findings from our study: (a) the key role of self-esteem depending upon weight and shape in discriminating the eating-disordered obese from non-eating-disordered individuals; and (b) the need to explore the whole lifespan when screening for BED, so pointing to the state–trait issue.

Obesity represents a major health issue in Western societies, and recent studies have shown that in a substantial number of overweight individuals there is a problem with binge eating. This observation has led to the conceptualization of a new eating disorder, binge eating disorder (BED), characterized by recurrent binge eating episodes in the absence of regular inappropriate compensatory behaviors (DSM-IV; American Psychiatric Association, 1994). Though infrequent in the general population, BED is relatively common among obese people, as this peculiar eating pattern often leads to weight gain and obesity; moreover, as adiposity increases, the tendency towards binge eating seems to increase too (Telch et al., 1988). In the United States the prevalence of this disorder is approximately 2% in community samples and 30% in clinical ones (Spitzer et al., 1992 and Spitzer et al., 1993b). Recent epidemiological and clinical studies (Basdevant et al., 1995, Gotestam and Agras, 1995, Robertson and Palmer, 1997 and Giusti et al., 1998) report a lower prevalence of BED in European countries such as: France (0.7% in the general population and 15.2% in a clinical sample); Norway (1.5% in a community-based sample); the UK (0.7% in a community sample of women with a history of obesity); and Switzerland (10% in a clinical sample). In a previous Italian survey (Ricca et al., 1998), BED was found in 8.1% of the subjects in a sample of overweight people undergoing specific obesity treatment; the diagnosis was made using a self-report questionnaire. There is strong evidence that interview-based methodologies tend to find a lower prevalence of the disorder compared with earlier studies that were based on self-report (de Zwaan et al., 1993, Greeno et al., 1995 and Stunkard et al., 1996). The clinical importance of the recognition of BED among the obese lies in the association with severe overweight problems, distress about eating and being overweight, psychopathology, and a poor outcome of weight-loss treatment (Yanovski, 1993, Yanovski et al., 1993, de Zwaan et al., 1994 and Mitchell and Pederson Mussel, 1995). Recently there has been a growing debate among researchers on the effectiveness of provisional DSM-IV diagnostic criteria as regards the frequency threshold (Spitzer et al., 1993b, Wilson et al., 1993, Kruger et al., 1996 and Striegel-Moore et al., 1998), the exclusionary criteria for compensatory behaviors (Mizes and Sloan, 1998), and the relationship with non-purging bulimia nervosa (Hay and Fairburn, 1998; Garfinkel, personal communication). The present study was designed to assess the prevalence of BED in a sample of obese Italians by means of a structured clinical interview; and then to investigate obese people in terms of cognitive and behavioral patterns shared by patients with anorexia and bulimia nervosa (eating disorders spectrum).