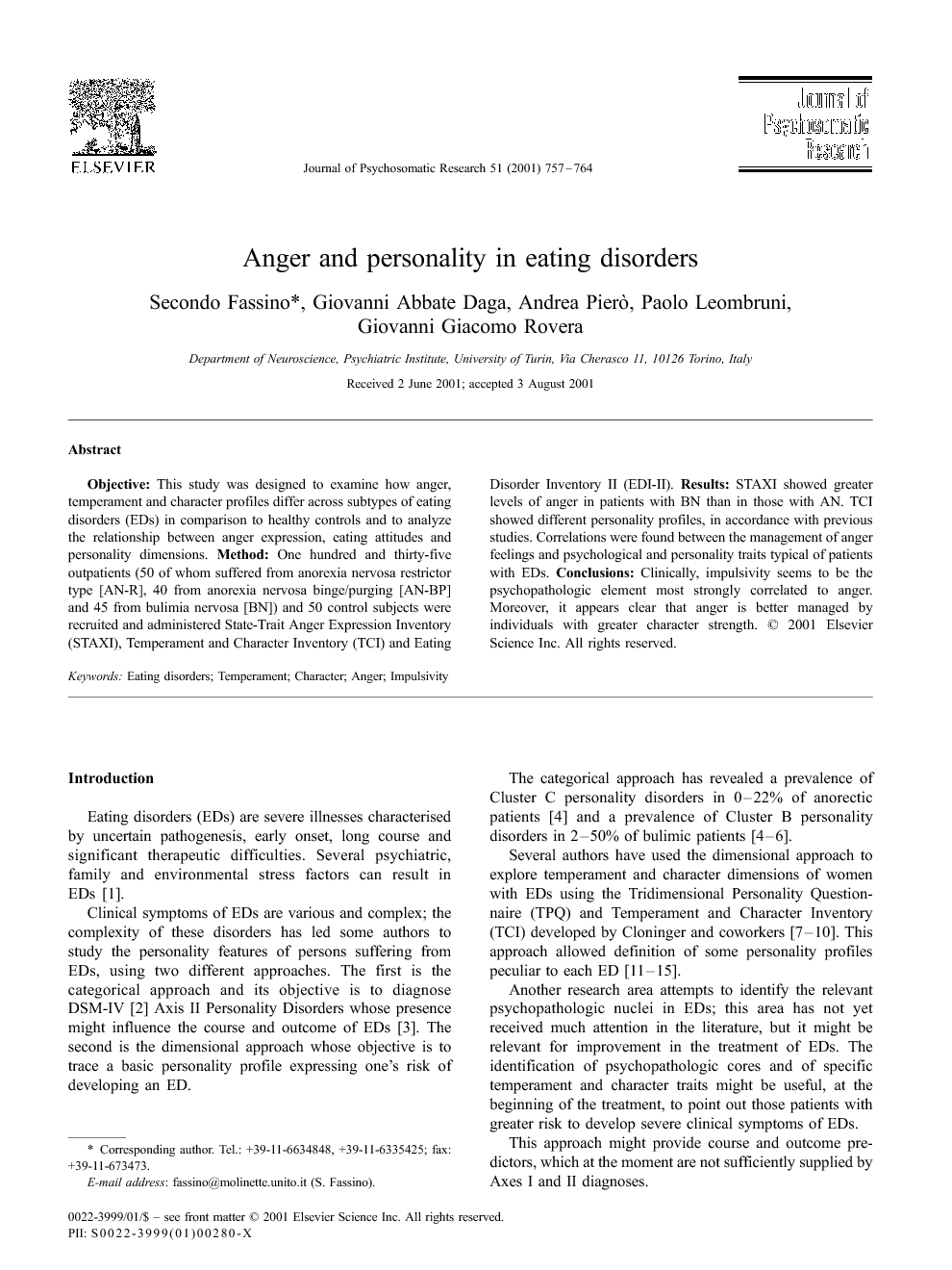 Objective: This study was designed to examine how anger, temperament and character profiles differ across subtypes of eating disorders (EDs) in comparison to healthy controls and to analyze the relationship between anger expression, eating attitudes and personality dimensions. Method: One hundred and thirty-five outpatients (50 of whom suffered from anorexia nervosa restrictor type [AN-R], 40 from anorexia nervosa binge/purging [AN-BP] and 45 from bulimia nervosa [BN]) and 50 control subjects were recruited and administered State-Trait Anger Expression Inventory (STAXI), Temperament and Character Inventory (TCI) and Eating Disorder Inventory II (EDI-II). Results: STAXI showed greater levels of anger in patients with BN than in those with AN. TCI showed different personality profiles, in accordance with previous studies. Correlations were found between the management of anger feelings and psychological and personality traits typical of patients with EDs. Conclusions: Clinically, impulsivity seems to be the psychopathologic element most strongly correlated to anger. Moreover, it appears clear that anger is better managed by individuals with greater character strength.

Eating disorders (EDs) are severe illnesses characterised by uncertain pathogenesis, early onset, long course and significant therapeutic difficulties. Several psychiatric, family and environmental stress factors can result in EDs [1]. Clinical symptoms of EDs are various and complex; the complexity of these disorders has led some authors to study the personality features of persons suffering from EDs, using two different approaches. The first is the categorical approach and its objective is to diagnose DSM-IV [2] Axis II Personality Disorders whose presence might influence the course and outcome of EDs [3]. The second is the dimensional approach whose objective is to trace a basic personality profile expressing one's risk of developing an ED. The categorical approach has revealed a prevalence of Cluster C personality disorders in 0–22% of anorectic patients [4] and a prevalence of Cluster B personality disorders in 2–50% of bulimic patients [4], [5] and [6]. Several authors have used the dimensional approach to explore temperament and character dimensions of women with EDs using the Tridimensional Personality Questionnaire (TPQ) and Temperament and Character Inventory (TCI) developed by Cloninger and coworkers [7], [8], [9] and [10]. This approach allowed definition of some personality profiles peculiar to each ED [11], [12], [13], [14] and [15]. Another research area attempts to identify the relevant psychopathologic nuclei in EDs; this area has not yet received much attention in the literature, but it might be relevant for improvement in the treatment of EDs. The identification of psychopathologic cores specific temperament and character traits might be useful, at the beginning of treatment, to point those patients with greater risk to develop severe clinical symptoms of EDs. This approach might provide course and outcome predictors, which at the moment are not sufficiently supplied by Axes I and II diagnoses. Aggressiveness is a relevant psychopathologic core because it can influence course and treatment outcome of EDs [16], [17] and [18]. The DSM-IV does not include a specific aggressive disorder but considers only a very important transnosographic dimension. Hostility, irritability and anger are the most common expressions of aggressiveness. Low tolerance and aggressiveness among individuals with EDs are means of expression that, at least in part, may derive from distorted family relationships and patterns [19] and [20] and from childhood experiences [21]. Some authors have demonstrated that in EDs correlation exists among severity of disturbed eating patterns, low degrees of self-assertiveness, high levels of self-directed hostility [22] and difficulty in expressing anger [23]. Moreover, in these disorders, impulsive actions can be correlated with difficulty in expressing anger [23]. Although some authors have investigated aggressiveness and some affective states in EDs, data are still inadequate, especially with regard to the relationship among anger, the severity of the ED, and the basic personality of the individual. Some peculiar behaviours of patients afflicted with EDs, such as vomiting, might be associated with higher levels of unexpressed anger, independently from diagnosis [24]. In this work, anger has not been studied as a unitary construct, but in its multifaceted nature, according to the conceptualization of Spielberger [25]. This author has stressed the importance of considering anger both as an emotional state and as a trait. State-anger is a changeable emotional condition, including feelings ranging from tension to fury, which are usually accompanied by symptoms caused by the activation of the autonomic nervous system. Trait-anger depends on the frequency of anger experiences, defining the individual's predisposition toward anger. Moreover, Spielberger stresses the fact that individuals are very different in the way they suppress or express anger. Thus, the aims of the current study were (1) to examine the different expressions of anger in subjects with anorexia nervosa restrictor type (AN-R), anorexia nervosa binge/purging (AN-BP), bulimia nervosa (BN) and in a nonclinical control group (CW); (2) to evaluate whether anger expression is different in vomiting (AN-BP and BN) and nonvomiting patients (AN-R); (3) to analyse the relationship between anger expression and eating attitudes and habits and (4) to analyse the relationship between anger expression and the personality dimensions as evaluated through the TCI.

Thus, these findings require further investigation. Future studies should evaluate how the different personality profiles and the correlated ways of expressing anger influence the course of EDs and how they might be changed by actual psychopharmacologic and psychotherapeutic treatments.