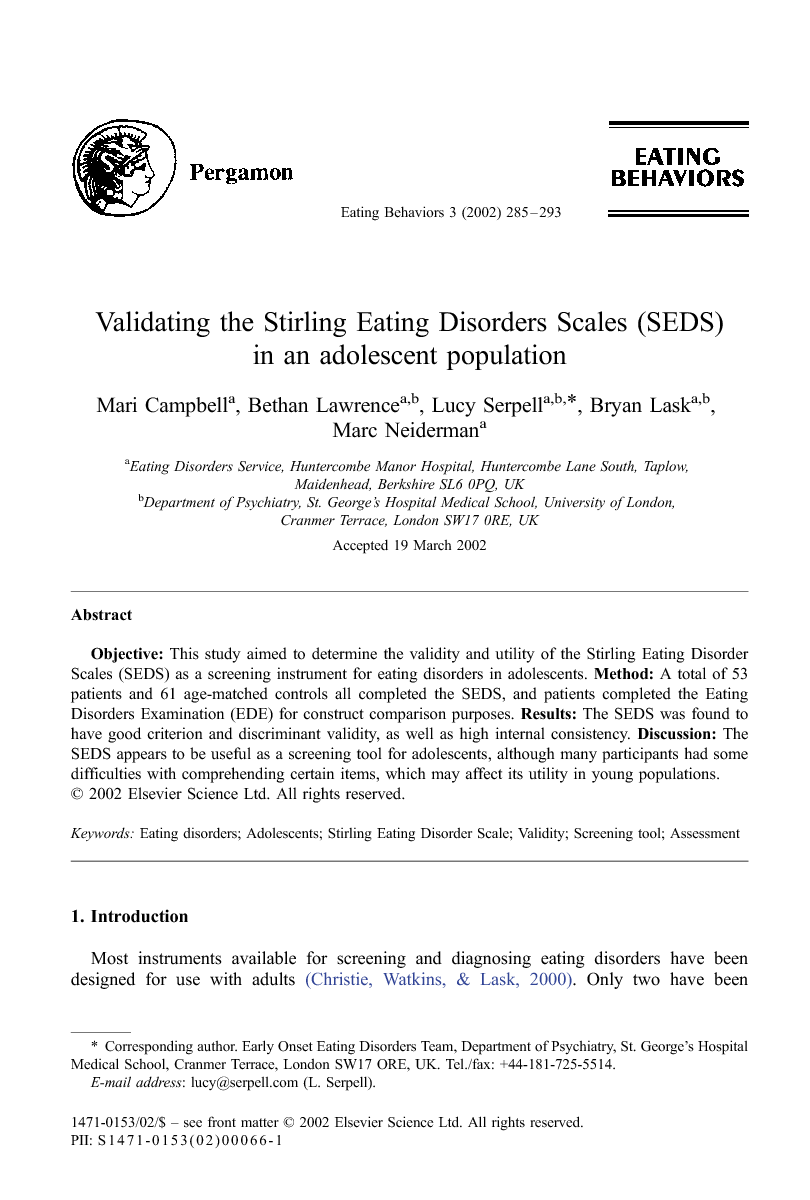 Objective: This study aimed to determine the validity and utility of the Stirling Eating Disorder Scales (SEDS) as a screening instrument for eating disorders in adolescents. Method: A total of 53 patients and 61 age-matched controls all completed the SEDS, and patients completed the Eating Disorders Examination (EDE) for construct comparison purposes. Results: The SEDS was found to have good criterion and discriminant validity, as well as high internal consistency. Discussion: The SEDS appears to be useful as a screening tool for adolescents, although many participants had some difficulties with comprehending certain items, which may affect its utility in young populations.

Most instruments available for screening and diagnosing eating disorders have been designed for use with adults (Christie, Watkins, & Lask, 2000). Only two have been adequately modified for use with children and adolescents: (1) The Children's Eating Attitudes Test (Ch-EAT), developed by Maloney, McGuire, and Daniels (1988) and based on the Eating Attitudes Test (EAT) (Garner & Garfinkel, 1979), has demonstrated good concurrent validity, test–retest validity, and internal consistency. (2) The Kids' Eating Disorders Survey (KEDS) was developed from the Eating Symptoms Inventory (ESI, Whittaker et al., 1989) and was based on DSM-III criteria (American Psychiatric Association, 1980) to address the marked differences in cognitive development between children and adults. Used as a screening device within the general population, it has good test–retest reliability (Childress, Brewerton, Hodges, & Jarrel, 1993). The Stirling Eating Disorders Scales (SEDS), developed by Williams et al. (1994), is a self-report instrument devised to screen and assess the cognitive and behavioural features of anorexia nervosa (AN) and bulimia nervosa (BN), as well as some of the commonly associated features. The SEDS consists of 80 statements, all requiring a true/false answer. These statements are divided into eight subscales—four “dietary” subscales: “anorexic dietary cognitions,” “anorexic dietary behaviours,” “bulimic dietary cognitions,” and “bulimic dietary behaviours”; and four “nondietary” subscales: “perceived external control,” “low assertiveness,” “low self-esteem,” and “self-directed hostility.” Each subscale has a threshold, determined during the development of the questionnaire. If a respondent scores above the threshold on a subscale, this indicates that they may have some of the features of AN or BN, and require further assessment. The SEDS psychometric properties were established by presenting it in three groups: AN (n=38, mean age 24.7 years, mean weight 45.9 kg), BN (n=36; mean age 25.0 years, mean weight 62.9 kg) and a normal control group (n=68, mean age 23.8 years, mean weight 62.5 kg.) Acceptable levels of internal consistency, reliability, group validity, and concurrent validity were demonstrated (Williams et al., 1994). The SEDS is commonly administered to children and young adolescents despite the fact that it was not specifically designed nor validated for use in this age group. The aim of this study was to determine the validity and utility of the SEDS in a younger population.