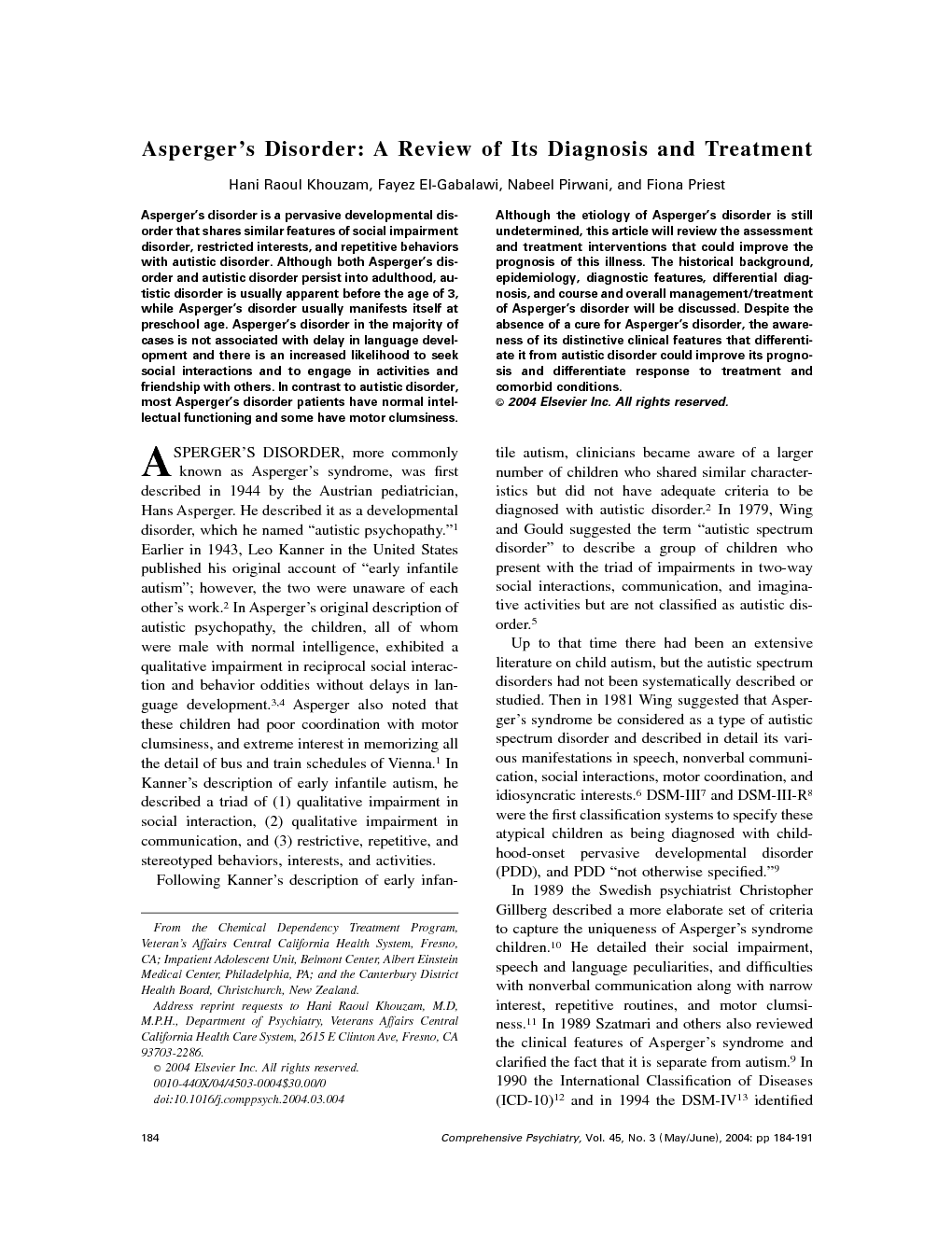 ASPERGER’S DISORDER, more commonly known as Asperger’s syndrome, was first described in 1944 by the Austrian pediatrician, Hans Asperger. He described it as a developmental disorder, which he named “autistic psychopathy.”1 Earlier in 1943, Leo Kanner in the United States published his original account of “early infantile autism”; however, the two were unaware of each other’s work.2 In Asperger’s original description of autistic psychopathy, the children, all of whom were male with normal intelligence, exhibited a qualitative impairment in reciprocal social interaction and behavior oddities without delays in language development.3 and 4 Asperger also noted that these children had poor coordination with motor clumsiness, and extreme interest in memorizing all the detail of bus and train schedules of Vienna.1 In Kanner’s description of early infantile autism, he described a triad of (1) qualitative impairment in social interaction, (2) qualitative impairment in communication, and (3) restrictive, repetitive, and stereotyped behaviors, interests, and activities. Following Kanner’s description of early infantile autism, clinicians became aware of a larger number of children who shared similar characteristics but did not have adequate criteria to be diagnosed with autistic disorder.2 In 1979, Wing and Gould suggested the term “autistic spectrum disorder” to describe a group of children who present with the triad of impairments in two-way social interactions, communication, and imaginative activities but are not classified as autistic disorder.5 Up to that time there had been an extensive literature on child autism, but the autistic spectrum disorders had not been systematically described or studied. Then in 1981 Wing suggested that Asperger’s syndrome be considered as a type of autistic spectrum disorder and described in detail its various manifestations in speech, nonverbal communication, social interactions, motor coordination, and idiosyncratic interests.6 DSM-III7 and DSM-III-R8 were the first classification systems to specify these atypical children as being diagnosed with childhood-onset pervasive developmental disorder (PDD), and PDD “not otherwise specified.”9 In 1989 the Swedish psychiatrist Christopher Gillberg described a more elaborate set of criteria to capture the uniqueness of Asperger’s syndrome children.10 He detailed their social impairment, speech and language peculiarities, and difficulties with nonverbal communication along with narrow interest, repetitive routines, and motor clumsiness.11 In 1989 Szatmari and others also reviewed the clinical features of Asperger’s syndrome and clarified the fact that it is separate from autism.9 In 1990 the International Classification of Diseases (ICD-10)12 and in 1994 the DSM-IV13 identified Asperger’s syndrome as being a PDD subtype with specific diagnostic criteria that are different from autistic disorder. The validity of Asperger’s disorder as a different diagnostic entity has been documented through several lines of evidence, including a DSM-IV field trial.14, 15, 16 and 17 Among these differences are higher verbal intelligence quotient (IQ) than performance IQ, which is often associated with a nonverbal learning disability.14 This differs from autistic disorder that is not associated with mental retardation in which, typically, nonverbal skills are more likely to be higher than or equivalent to verbal skills.15 Also there appears to be a higher incidence of Asperger’s disorder in first-degree relatives.16 In addition, there is a different pattern of comorbidity in Asperger’s disorder, with a higher level of psychosis, violent behavior, and depression.17

Asperger’s disorder is a psychiatric condition with specific ICD-10 and DSM-IV clinical diagnostic criteria that are different from autistic disorder. Although the etiology of Asperger’s disorder is still undetermined, the available clinical data suggest that despite the persistence of social difficulties, many patients are capable of establishing marital relationships and many are capable of adult self-sufficiency. Awareness of Asperger’s disorder’s distinctive clinical features and understanding of its historical background, epidemiology, and course, could eventually lead to more effective evaluation and management of these patients. Although the validity and usefulness of an Asperger’s disorder-specific diagnostic concept is far from resolved, it is our hope that this review will assist clinicians in evaluating and managing patients with this lifelong disorder and subsequently improve their long-term prognosis.