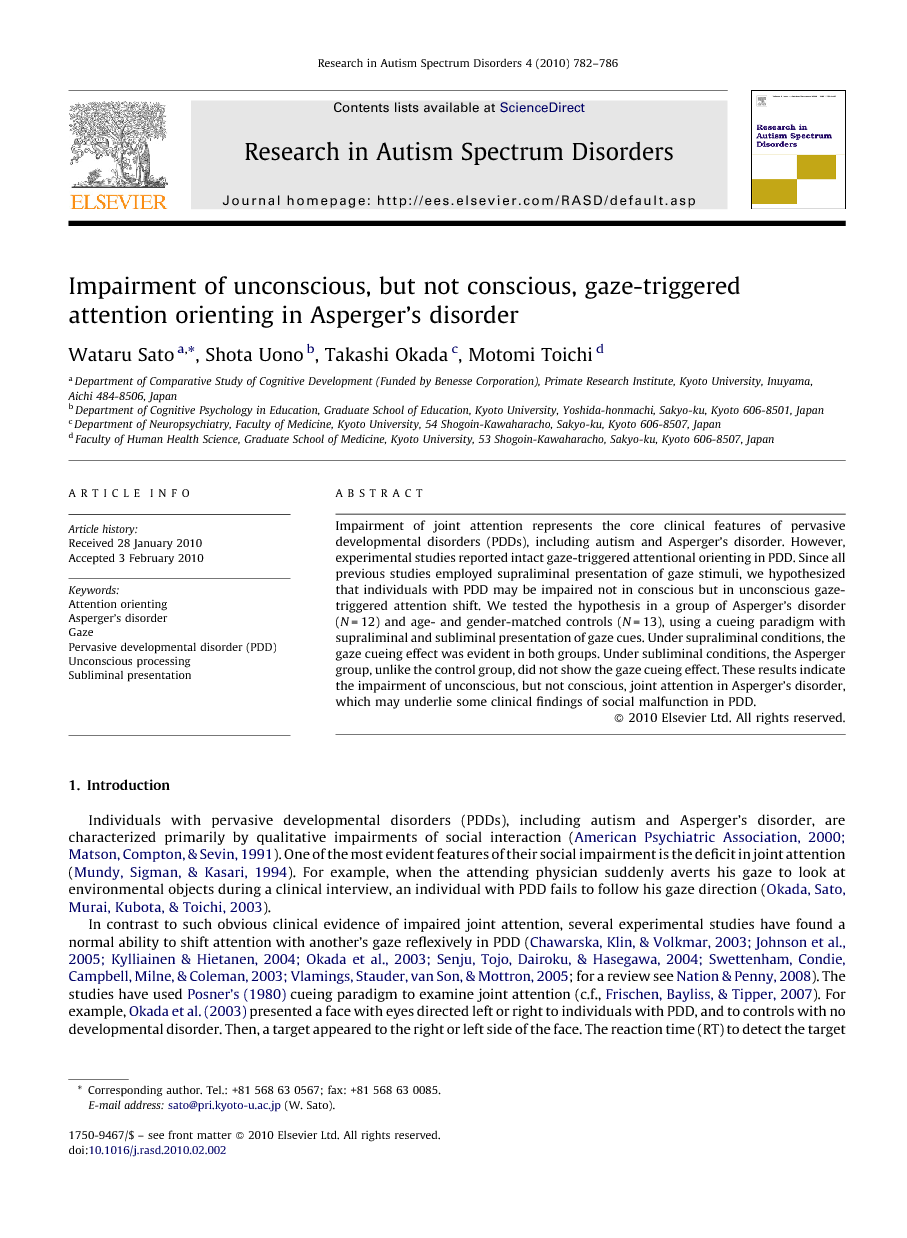 Impairment of joint attention represents the core clinical features of pervasive developmental disorders (PDDs), including autism and Asperger's disorder. However, experimental studies reported intact gaze-triggered attentional orienting in PDD. Since all previous studies employed supraliminal presentation of gaze stimuli, we hypothesized that individuals with PDD may be impaired not in conscious but in unconscious gaze-triggered attention shift. We tested the hypothesis in a group of Asperger's disorder (N = 12) and age- and gender-matched controls (N = 13), using a cueing paradigm with supraliminal and subliminal presentation of gaze cues. Under supraliminal conditions, the gaze cueing effect was evident in both groups. Under subliminal conditions, the Asperger group, unlike the control group, did not show the gaze cueing effect. These results indicate the impairment of unconscious, but not conscious, joint attention in Asperger's disorder, which may underlie some clinical findings of social malfunction in PDD.

Individuals with pervasive developmental disorders (PDDs), including autism and Asperger's disorder, are characterized primarily by qualitative impairments of social interaction (American Psychiatric Association, 2000 and Matson et al., 1991). One of the most evident features of their social impairment is the deficit in joint attention (Mundy, Sigman, & Kasari, 1994). For example, when the attending physician suddenly averts his gaze to look at environmental objects during a clinical interview, an individual with PDD fails to follow his gaze direction (Okada, Sato, Murai, Kubota, & Toichi, 2003). In contrast to such obvious clinical evidence of impaired joint attention, several experimental studies have found a normal ability to shift attention with another's gaze reflexively in PDD (Chawarska et al., 2003, Johnson et al., 2005, Kylliainen and Hietanen, 2004, Okada et al., 2003, Senju et al., 2004, Swettenham et al., 2003 and Vlamings et al., 2005; for a review see Nation & Penny, 2008). The studies have used Posner's (1980) cueing paradigm to examine joint attention (c.f., Frischen, Bayliss, & Tipper, 2007). For example, Okada et al. (2003) presented a face with eyes directed left or right to individuals with PDD, and to controls with no developmental disorder. Then, a target appeared to the right or left side of the face. The reaction time (RT) to detect the target was shorter at a validly cued location than at an invalidly cued location in both PDD and control participants. These results suggest that computerized experiments using a conventional gaze cueing paradigm cannot reveal the impaired joint attention in PDD. Experimental social psychological studies have revealed that our social interactions are full of adaptive unconscious processes (Wilson, 2002). A recent study revealed that gaze-triggered attention could even occur unconsciously (Sato, Okada, & Toichi, 2007). Based on these data, we hypothesized it would be unconscious, rather than conscious, gaze-triggered attention shift that is impaired in PDD. Here we tested this hypothesis in a group of Asperger's disorder and age- and gender-matched typically developing controls. We used the same cueing paradigm with supraliminally or subliminally presented gaze cues, as in a previous study (Sato et al., 2007).