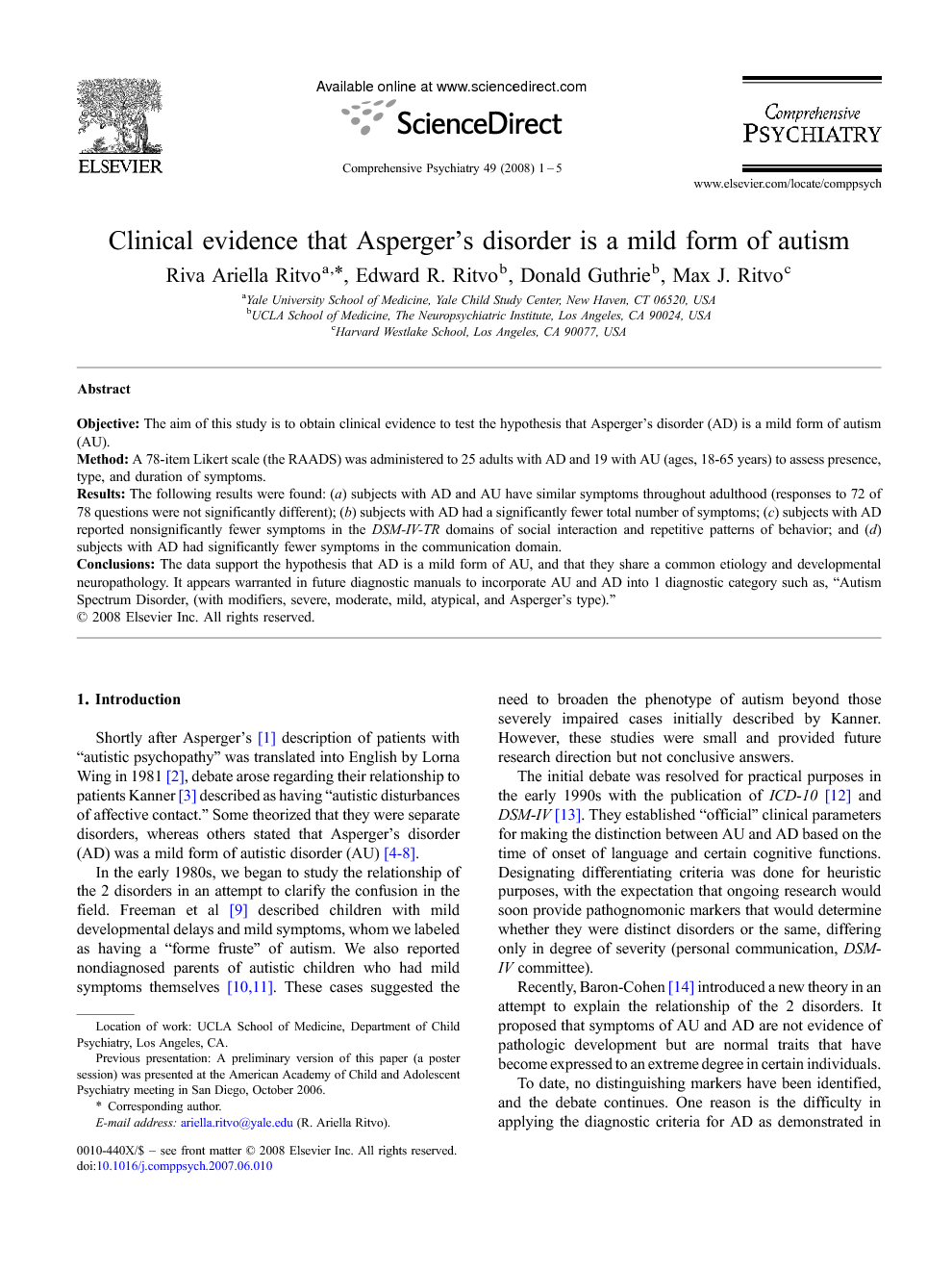 Objective The aim of this study is to obtain clinical evidence to test the hypothesis that Asperger's disorder (AD) is a mild form of autism (AU). Method A 78-item Likert scale (the RAADS) was administered to 25 adults with AD and 19 with AU (ages, 18-65 years) to assess presence, type, and duration of symptoms. Results The following results were found: (a) subjects with AD and AU have similar symptoms throughout adulthood (responses to 72 of 78 questions were not significantly different); (b) subjects with AD had a significantly fewer total number of symptoms; (c) subjects with AD reported nonsignificantly fewer symptoms in the DSM-IV-TR domains of social interaction and repetitive patterns of behavior; and (d) subjects with AD had significantly fewer symptoms in the communication domain. Conclusions The data support the hypothesis that AD is a mild form of AU, and that they share a common etiology and developmental neuropathology. It appears warranted in future diagnostic manuals to incorporate AU and AD into 1 diagnostic category such as, “Autism Spectrum Disorder, (with modifiers, severe, moderate, mild, atypical, and Asperger's type).”

Shortly after Asperger's [1] description of patients with “autistic psychopathy” was translated into English by Lorna Wing in 1981 [2], debate arose regarding their relationship to patients Kanner [3] described as having “autistic disturbances of affective contact.” Some theorized that they were separate disorders, whereas others stated that Asperger's disorder (AD) was a mild form of autistic disorder (AU) [4], [5], [6], [7] and [8]. In the early 1980s, we began to study the relationship of the 2 disorders in an attempt to clarify the confusion in the field. Freeman et al [9] described children with mild developmental delays and mild symptoms, whom we labeled as having a “forme fruste” of autism. We also reported nondiagnosed parents of autistic children who had mild symptoms themselves [10] and [11]. These cases suggested the need to broaden the phenotype of autism beyond those severely impaired cases initially described by Kanner. However, these studies were small and provided future research direction but not conclusive answers. The initial debate was resolved for practical purposes in the early 1990s with the publication of ICD-10 [12] and DSM-IV [13]. They established “official” clinical parameters for making the distinction between AU and AD based on the time of onset of language and certain cognitive functions. Designating differentiating criteria was done for heuristic purposes, with the expectation that ongoing research would soon provide pathognomonic markers that would determine whether they were distinct disorders or the same, differing only in degree of severity (personal communication, DSM-IV committee). Recently, Baron-Cohen [14] introduced a new theory in an attempt to explain the relationship of the 2 disorders. It proposed that symptoms of AU and AD are not evidence of pathologic development but are normal traits that have become expressed to an extreme degree in certain individuals. To date, no distinguishing markers have been identified, and the debate continues. One reason is the difficulty in applying the diagnostic criteria for AD as demonstrated in 2 recent studies. Tyron et al [15] carefully rediagnosed 26 children who had previously been diagnosed as having AD. Surprisingly, they were not able to reconfirm the diagnosis in even one of these 26 children. Klin et al [16], in a complex and detailed study, had 2 highly experienced clinicians independently diagnose 65 subjects, 8 to 32 years old. They used 3 definitions of AD (DSM-IV, Speech Delay, and a “New System”), as well as DSM-IV definitions of AU, Pervasive Developmental Disorder Not Otherwise Specified, and Non-Pervasive Developmental Disorder. They found that only 44% of the subjects received the diagnosis of AD by all 3 of the diagnostic criteria for AD. The present study was designed to obtain clinical data to help further our understanding of the relationship of AD with AU. We postulated that (a) AD is a mild form (phenotype) of AU; (b) both are caused by the same abnormal genetic programming of brain development; and (c) both express the same developmental brain neuropathology that is manifested clinically by separation (lack of normal coordination) of the 3 main developmental pathways (social interaction, communication, and repetitive behaviors) and by delays, spurts, and plateaus of brain development [17]. The literature supports a common etiology due to abnormal genetic programming: (a) the original suggestions of both Kanner [3] and Asperger [1] that “familial factors are involved”; (b) the high concordance rate in monozygotic twins [18] and [19] and the high sibling recurrence risk estimate [20]; (c) evidence of delayed maturation of brain volume [21]; and (d) common abnormalities in neurotransmitters (ie, serotonin and melatonin) [22] and [23]. In addition, an international multicenter study recently identified candidate genes that may be associated with both AD and AU [24]. For this study, 3 specific hypotheses were established for empirical testing. They stated that if AD is a mild form of AU, then (a) similar symptoms will be present in both disorders throughout adulthood, (b) subjects with AD will have fewer overall symptoms than subjects with AU, and (c) subjects with AD will have fewer symptoms than subjects with AU in each of the 3 DSM-IV-TR symptom domains [25]. To obtain data on specific symptoms to test these hypotheses, we administered an empirically based 78-item, self-rating scale (the RAADS) [26] to 25 adults with AD and 19 with AU. It uses a developmentally based Likert scale to quantify the presence, distribution, and longevity of specific symptoms.

The data indicate that in adults (age 18 years and older), the symptoms of AU and AD overlap and cannot be separated by assessing their specific type, duration, or distribution according to the area of development affected. In addition, subjects with AD have significantly fewer symptoms. These results are consistent with the hypothesis that AD is a mild form of AU, and that they share the same etiology and underlying developmental neuropathology. Based on these results and results of other previously cited studies, it appears reasonable to suggest that AU and AD should be included within the same diagnostic category in future editions of the ICD and the DSM. We propose: Autism Spectrum Disorder, with modifying codes for severe, moderate, mild, Asperger's, atypical, and subclinical types.