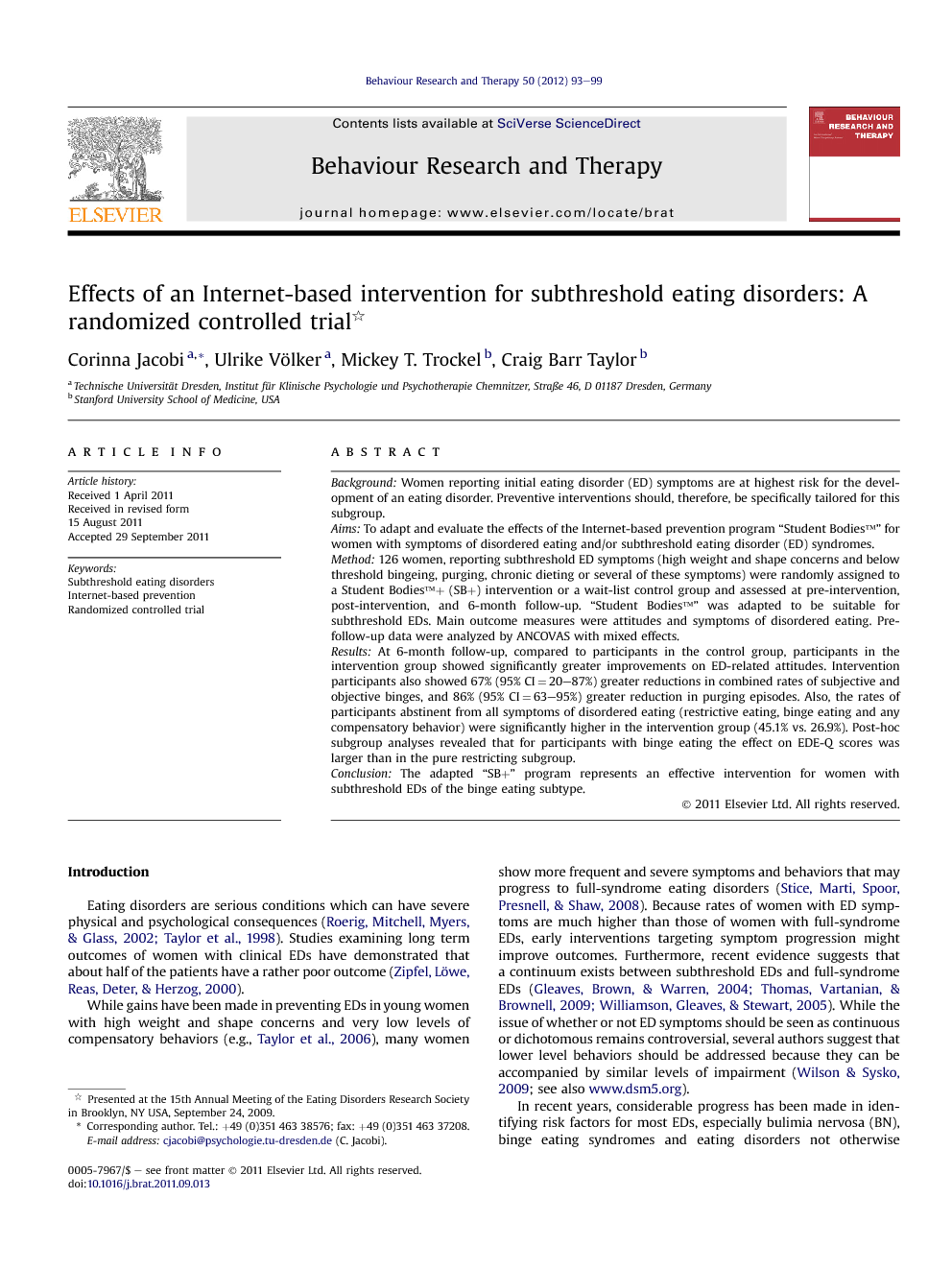 Background Women reporting initial eating disorder (ED) symptoms are at highest risk for the development of an eating disorder. Preventive interventions should, therefore, be specifically tailored for this subgroup. Aims To adapt and evaluate the effects of the Internet-based prevention program “Student Bodies™” for women with symptoms of disordered eating and/or subthreshold eating disorder (ED) syndromes. Method 126 women, reporting subthreshold ED symptoms (high weight and shape concerns and below threshold bingeing, purging, chronic dieting or several of these symptoms) were randomly assigned to a Student Bodies™+ (SB+) intervention or a wait-list control group and assessed at pre-intervention, post-intervention, and 6-month follow-up. “Student Bodies™” was adapted to be suitable for subthreshold EDs. Main outcome measures were attitudes and symptoms of disordered eating. Pre-follow-up data were analyzed by ANCOVAS with mixed effects. Results At 6-month follow-up, compared to participants in the control group, participants in the intervention group showed significantly greater improvements on ED-related attitudes. Intervention participants also showed 67% (95% CI = 20–87%) greater reductions in combined rates of subjective and objective binges, and 86% (95% CI = 63–95%) greater reduction in purging episodes. Also, the rates of participants abstinent from all symptoms of disordered eating (restrictive eating, binge eating and any compensatory behavior) were significantly higher in the intervention group (45.1% vs. 26.9%). Post-hoc subgroup analyses revealed that for participants with binge eating the effect on EDE-Q scores was larger than in the pure restricting subgroup. Conclusion The adapted “SB+” program represents an effective intervention for women with subthreshold EDs of the binge eating subtype.

Eating disorders are serious conditions which can have severe physical and psychological consequences (Roerig et al., 2002 and Taylor et al., 1998). Studies examining long term outcomes of women with clinical EDs have demonstrated that about half of the patients have a rather poor outcome (Zipfel, Löwe, Reas, Deter, & Herzog, 2000). While gains have been made in preventing EDs in young women with high weight and shape concerns and very low levels of compensatory behaviors (e.g., Taylor et al., 2006), many women show more frequent and severe symptoms and behaviors that may progress to full-syndrome eating disorders (Stice, Marti, Spoor, Presnell, & Shaw, 2008). Because rates of women with ED symptoms are much higher than those of women with full-syndrome EDs, early interventions targeting symptom progression might improve outcomes. Furthermore, recent evidence suggests that a continuum exists between subthreshold EDs and full-syndrome EDs (Gleaves et al., 2004, Thomas et al., 2009 and Williamson et al., 2005). While the issue of whether or not ED symptoms should be seen as continuous or dichotomous remains controversial, several authors suggest that lower level behaviors should be addressed because they can be accompanied by similar levels of impairment (Wilson & Sysko, 2009; see also www.dsm5.org). In recent years, considerable progress has been made in identifying risk factors for most EDs, especially bulimia nervosa (BN), binge eating syndromes and eating disorders not otherwise specified (EDNOS) (Jacobi and Fittig, 2010, Jacobi et al., 2004 and Striegel-Moore and Bulik, 2007). Most of these risk factors (e.g., dieting, eating, weight and shape concern, low self-esteem, negative affect) could also be confirmed when examined in a sample of young women at higher risk initially, selected by high weight and shape concerns (Jacobi et al., 2011). Consequently, the most potent and best replicated risk factors before the onset of full-syndrome EDs should be targeted in preventive interventions. Meta-analyses on effects of prevention trials for EDs have shown that preventive interventions are most effective if they are interactive (vs. didactic), consist of multiple sessions, are offered solely to women, and are targeted for individuals at risk (Shaw, Stice, & Becker, 2009). Student Bodies™ is one of the programs fulfilling all of these criteria. It is an 8-session cognitive-behavioral online program over 8 weeks, targeting core risk factors for EDs, such as weight and shape concerns, negative body image and low self-esteem. It was originally developed at Stanford University School of Medicine and subsequently evaluated in several randomized controlled trials (Celio et al., 2000 and Winzelberg et al., 1998). In the past years, Student Bodies™ has been adapted for Germany and evaluated both as a universal and targeted preventive program (Beintner et al., 2011 and Jacobi et al., 2007), i.e., for students already at risk for an ED, and for different age groups. A recent meta-analysis (Beintner et al., 2011) comparing effects of all randomized controlled studies with Student Bodies™ conducted in both the USA and Germany showed that there were no significant differences in effect sizes between the two countries. In addition, we found that changes in weight and shape concerns across cultures were larger in high-risk groups than in non-risk groups, a finding consistent with Stice, Shaw, and Marti’s (2007) meta-analytic review of eating disorders that found that selected eating disorder prevention programs are more effective than universal ones. Several controlled (Fernandez-Aranda et al., 2009 and Myers et al., 2004) and uncontrolled trials (Murray et al., 2007 and Pretorius et al., 2009) have shown evidence that Internet-, computer-based interventions or interventions using new technologies can be effective for patients with full-syndrome EDs or symptoms of EDs. Given both the results of prevention trials for high-risk groups and those of interventions for clinical populations, our intention was to expand the existing program Student Bodies™ to women with clinical symptoms of EDs or subthreshold EDs. In order to do so, the existing Student Bodies™ program had to be adapted to specifically address these symptoms. Accordingly, the main objectives of the current study were to examine whether the adapted version of Student Bodies™ (referred to as Student Bodies™+) would: 1) improve relevant knowledge (on EDs, healthy eating & exercise), 2) reduce attitudes of disordered eating, 3) reduce the frequency and/or intensity of ED symptoms or behaviors, and 4) reduce general psychopathological burden in women with ED symptoms or subthreshold EDs.