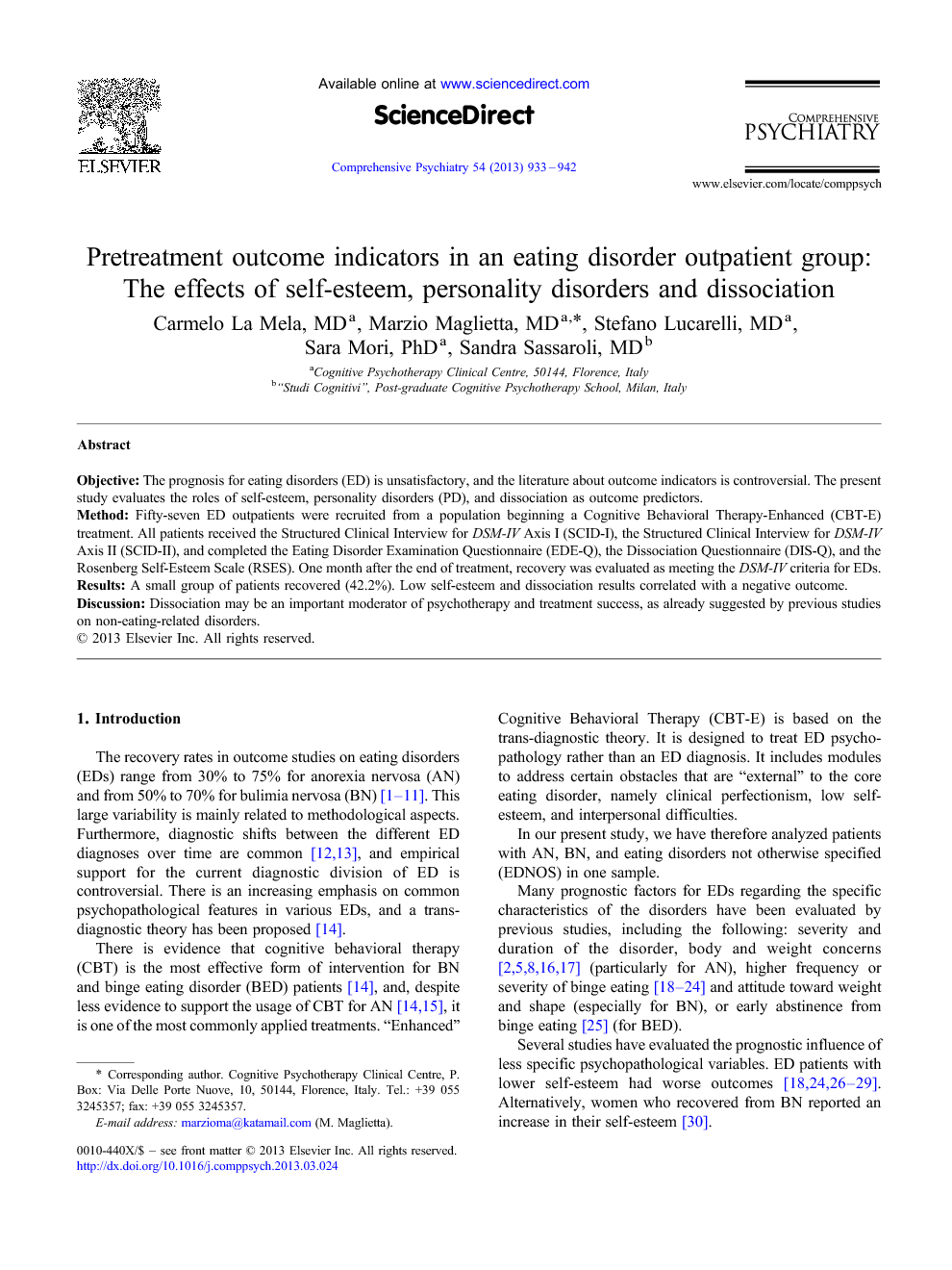 Objective The prognosis for eating disorders (ED) is unsatisfactory, and the literature about outcome indicators is controversial. The present study evaluates the roles of self-esteem, personality disorders (PD), and dissociation as outcome predictors. Method Fifty-seven ED outpatients were recruited from a population beginning a Cognitive Behavioral Therapy-Enhanced (CBT-E) treatment. All patients received the Structured Clinical Interview for DSM-IV Axis I (SCID-I), the Structured Clinical Interview for DSM-IV Axis II (SCID-II), and completed the Eating Disorder Examination Questionnaire (EDE-Q), the Dissociation Questionnaire (DIS-Q), and the Rosenberg Self-Esteem Scale (RSES). One month after the end of treatment, recovery was evaluated as meeting the DSM-IV criteria for EDs. Results A small group of patients recovered (42.2%). Low self-esteem and dissociation results correlated with a negative outcome. Discussion Dissociation may be an important moderator of psychotherapy and treatment success, as already suggested by previous studies on non-eating-related disorders.

The recovery rates in outcome studies on eating disorders (EDs) range from 30% to 75% for anorexia nervosa (AN) and from 50% to 70% for bulimia nervosa (BN) [1], [2], [3], [4], [5], [6], [7], [8], [9], [10] and [11]. This large variability is mainly related to methodological aspects. Furthermore, diagnostic shifts between the different ED diagnoses over time are common [12] and [13], and empirical support for the current diagnostic division of ED is controversial. There is an increasing emphasis on common psychopathological features in various EDs, and a trans-diagnostic theory has been proposed [14]. There is evidence that cognitive behavioral therapy (CBT) is the most effective form of intervention for BN and binge eating disorder (BED) patients [14], and, despite less evidence to support the usage of CBT for AN [14] and [15], it is one of the most commonly applied treatments. “Enhanced” Cognitive Behavioral Therapy (CBT-E) is based on the trans-diagnostic theory. It is designed to treat ED psychopathology rather than an ED diagnosis. It includes modules to address certain obstacles that are “external” to the core eating disorder, namely clinical perfectionism, low self-esteem, and interpersonal difficulties. In our present study, we have therefore analyzed patients with AN, BN, and eating disorders not otherwise specified (EDNOS) in one sample. Many prognostic factors for EDs regarding the specific characteristics of the disorders have been evaluated by previous studies, including the following: severity and duration of the disorder, body and weight concerns [2], [5], [8], [16] and [17] (particularly for AN), higher frequency or severity of binge eating [18], [19], [20], [21], [22], [23] and [24] and attitude toward weight and shape (especially for BN), or early abstinence from binge eating [25] (for BED). Several studies have evaluated the prognostic influence of less specific psychopathological variables. ED patients with lower self-esteem had worse outcomes [18], [24], [26], [27], [28] and [29]. Alternatively, women who recovered from BN reported an increase in their self-esteem [30]. Moreover, the reported frequencies of personality disorders (PD) vary from 27% to 93% among clinical and community samples with EDs [31], [32], [33], [34], [35] and [36]. It is likely that methodological problems account for this variation, and personality features are affected by malnutrition [37] and [38]. Among the pretreatment variables associated with poor outcomes, the presence of a comorbid PD is considered relevant in several studies [21], [39], [40] and [41]. The presence of borderline PD (BPD) has been associated with poor treatment responses in AN binge–purge types, BN [36], [42] and [43] and BED [44]. These results were not fully replicated by other studies [45], [46] and [47]. Vrabel et al. [48] showed a decreasing prevalence of PDs in a 5-year follow-up of long-standing ED patients, indicating that meaningful clinical changes in PDs do occur among ED patients, especially during the period of treatment that focused on ED symptoms. In the follow-up of the same series done by Rø et al. [49], improvements in ED symptoms preceded changes in PDs. Several findings support the hypothesis that there is a relationship between dissociation and EDs [50], [51], [52], [53] and [54]. Furthermore, dissociation has been found to play an important role in bingeing severity for subjects with bulimic disorders [55], [56] and [57], and it is probably involved in the most accomplished theories about binge eating: the “mood modulation” theory [58], [59] and [60] and the “escape” theory [61]. Dissociation has a long tradition in psychodynamic research in which it is considered a negative prognostic factor [62], but the body of evidence linking dissociation to a bad outcome in psychotherapy has begun to grow recently [63]. Michelson et al. [64], in anxiety disorders, observed that higher levels of dissociation prior to treatment were related to higher psychopathology assessed after CBT. Likewise, Rufer et al. [65] found that patients with obsessive–compulsive disorder who experienced higher levels of dissociation in the beginning of the study experienced higher symptom severity after CBT. Spitzer et al. [66] confirmed the negative effect of dissociative experiences on psychotherapy responses on patients with a broad range of mental disorders. Many authors consider that the fragmentation of consciousness, memory and identity, which are characteristics of dissociative experiences, may interfere with learning processes and therefore negatively influence the effectiveness of therapies grounded on those, such as CBT [64], [67] and [68]. The aims of the present study were to assess the roles of self-esteem, PDs, and dissociative experiences as treatment outcome predictors for CBT in ED patients. We hypothesized that, after a minimum follow-up period of 1 month after the end of a manual-based Cognitive Behavioral Therapy-Enhanced (CBT-E) treatment for ED patients, we would find that a negative outcome (not recovered or dropout), compared to a positive outcome (recovered), is correlated with lower levels of self-esteem, the presence of a PD and higher levels of dissociation, as measured during the assessment phase.