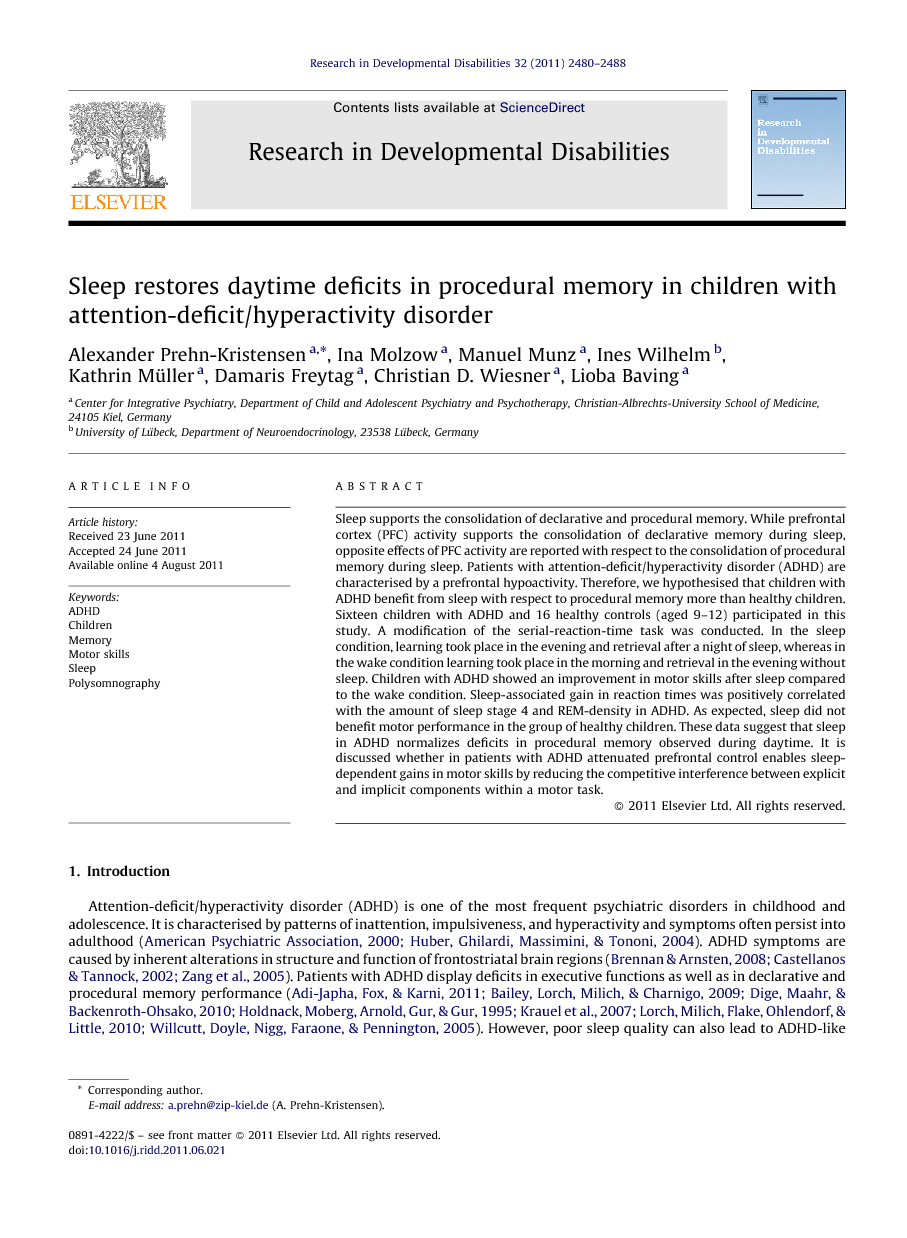 Sleep supports the consolidation of declarative and procedural memory. While prefrontal cortex (PFC) activity supports the consolidation of declarative memory during sleep, opposite effects of PFC activity are reported with respect to the consolidation of procedural memory during sleep. Patients with attention-deficit/hyperactivity disorder (ADHD) are characterised by a prefrontal hypoactivity. Therefore, we hypothesised that children with ADHD benefit from sleep with respect to procedural memory more than healthy children. Sixteen children with ADHD and 16 healthy controls (aged 9–12) participated in this study. A modification of the serial-reaction-time task was conducted. In the sleep condition, learning took place in the evening and retrieval after a night of sleep, whereas in the wake condition learning took place in the morning and retrieval in the evening without sleep. Children with ADHD showed an improvement in motor skills after sleep compared to the wake condition. Sleep-associated gain in reaction times was positively correlated with the amount of sleep stage 4 and REM-density in ADHD. As expected, sleep did not benefit motor performance in the group of healthy children. These data suggest that sleep in ADHD normalizes deficits in procedural memory observed during daytime. It is discussed whether in patients with ADHD attenuated prefrontal control enables sleep-dependent gains in motor skills by reducing the competitive interference between explicit and implicit components within a motor task.

Attention-deficit/hyperactivity disorder (ADHD) is one of the most frequent psychiatric disorders in childhood and adolescence. It is characterised by patterns of inattention, impulsiveness, and hyperactivity and symptoms often persist into adulthood (American Psychiatric Association, 2000 and Huber et al., 2004). ADHD symptoms are caused by inherent alterations in structure and function of frontostriatal brain regions (Brennan and Arnsten, 2008, Castellanos and Tannock, 2002 and Zang et al., 2005). Patients with ADHD display deficits in executive functions as well as in declarative and procedural memory performance (Adi-Japha et al., 2011, Bailey et al., 2009, Dige et al., 2010, Holdnack et al., 1995, Krauel et al., 2007, Lorch et al., 2010 and Willcutt et al., 2005). However, poor sleep quality can also lead to ADHD-like symptoms of inattention or hyperactivity in healthy children (Gruber et al., 2007, Gruber et al., 2011, Paavonen et al., 2009 and Steenari et al., 2003) and these symptoms were suggested to be related to temporary dysfunctions of frontostriatal loops (Killgore, 2010). While reports of altered sleep architecture in ADHD are inconsistent, a reduced subjective sleep quality has been frequently observed in ADHD (Cortese et al., 2009, Konofal et al., 2010 and Owens, 2009). Since low sleep quality can hamper “online” memory performance (such as encoding or retrieval) (Robillard, Prince, Boissonneault, Filipini, & Carrier, 2011), one might expect that memory performance after sleep is deteriorated in ADHD. Sleep, however, serves to restoration or daytime alertness (Siegel, 2005) thereby enabling optimal preconditions for processes of encoding and retrieval. Sleep remarkably fosters the “offline” consolidation of newly acquired memories (Diekelmann and Born, 2010, Stickgold, 2005 and Walker, 2008). The prefrontal cortex (PFC) plays a critical role in the “offline” consolidation during sleep of both declarative and procedural memories, but in various ways: On the one hand, prefrontal generated slow oscillations during sleep foster the consolidation of declarative memory (Marshall et al., 2006 and Marshall et al., 2004). Recently we reported a reduced consolidation of declarative memory in young patients with ADHD (Prehn-Kristensen et al., 2011a). Noteworthy, this deficit could not be ascribed to insufficient sleep quality or changes in sleep architecture. Rather, it was proposed to be related to a reduced function of prefrontal mediated slow oscillations during sleep. On the other hand, reduced PFC activity coincided with the gain in procedural memories after sleep in healthy adults (Fischer, Nitschke, Melchert, Erdmann, & Born, 2005), and adult patients with lesions in the PFC displayed a better procedural memory performance after sleep compared to healthy controls (Beldarrain, Astorgano, Gonzalez, & Garcia-Monco, 2008). The latter findings suggest that patients with ADHD, who are characterised by a hypofrontality (Rubia et al., 1999, Zang et al., 2007 and Zang et al., 2005), should benefit from sleep with respect to motor performance. Based on the results that reduced PFC activity is associated with gaining in motor skill after sleep, and that ADHD is linked to a PFC hypoactivity, we hypothesised that, in children with ADHD, sleep enhances memory consolidation of motor skills. We assume that healthy children do not show any sleep-associated gain in motor performance, as we reported in former studies (Fischer et al., 2007, Prehn-Kristensen et al., 2009 and Wilhelm et al., 2008). In ADHD, sleep quality seems to be more affected by sleep laboratory environment than in healthy controls (Philipsen et al., 2005 and Prihodova et al., 2010). Therefore, we conducted sleep measurements at children's home.