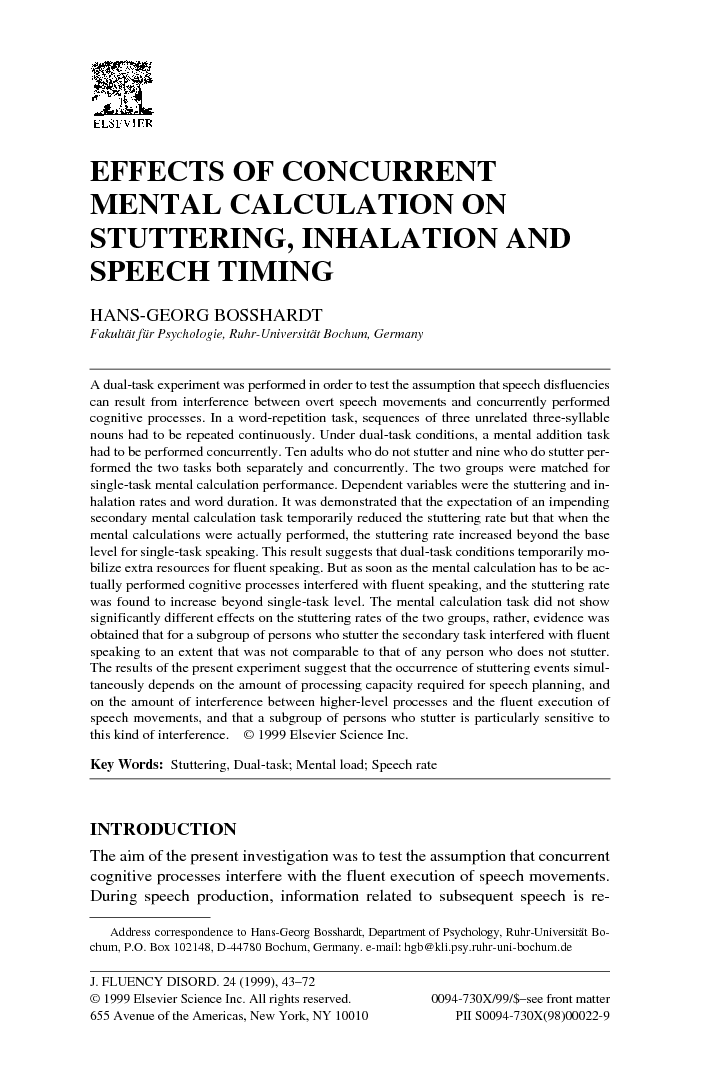 A dual-task experiment was performed in order to test the assumption that speech disfluencies can result from interference between overt speech movements and concurrently performed cognitive processes. In a word-repetition task, sequences of three unrelated three-syllable nouns had to be repeated continuously. Under dual-task conditions, a mental addition task had to be performed concurrently. Ten adults who do not stutter and nine who do stutter performed the two tasks both separately and concurrently. The two groups were matched for single-task mental calculation performance. Dependent variables were the stuttering and inhalation rates and word duration. It was demonstrated that the expectation of an impending secondary mental calculation task temporarily reduced the stuttering rate but that when the mental calculations were actually performed, the stuttering rate increased beyond the base level for single-task speaking. This result suggests that dual-task conditions temporarily mobilize extra resources for fluent speaking. But as soon as the mental calculation has to be actually performed cognitive processes interfered with fluent speaking, and the stuttering rate was found to increase beyond single-task level. The mental calculation task did not show significantly different effects on the stuttering rates of the two groups, rather, evidence was obtained that for a subgroup of persons who stutter the secondary task interfered with fluent speaking to an extent that was not comparable to that of any person who does not stutter. The results of the present experiment suggest that the occurrence of stuttering events simultaneously depends on the amount of processing capacity required for speech planning, and on the amount of interference between higher-level processes and the fluent execution of speech movements, and that a subgroup of persons who stutter is particularly sensitive to this kind of interference.