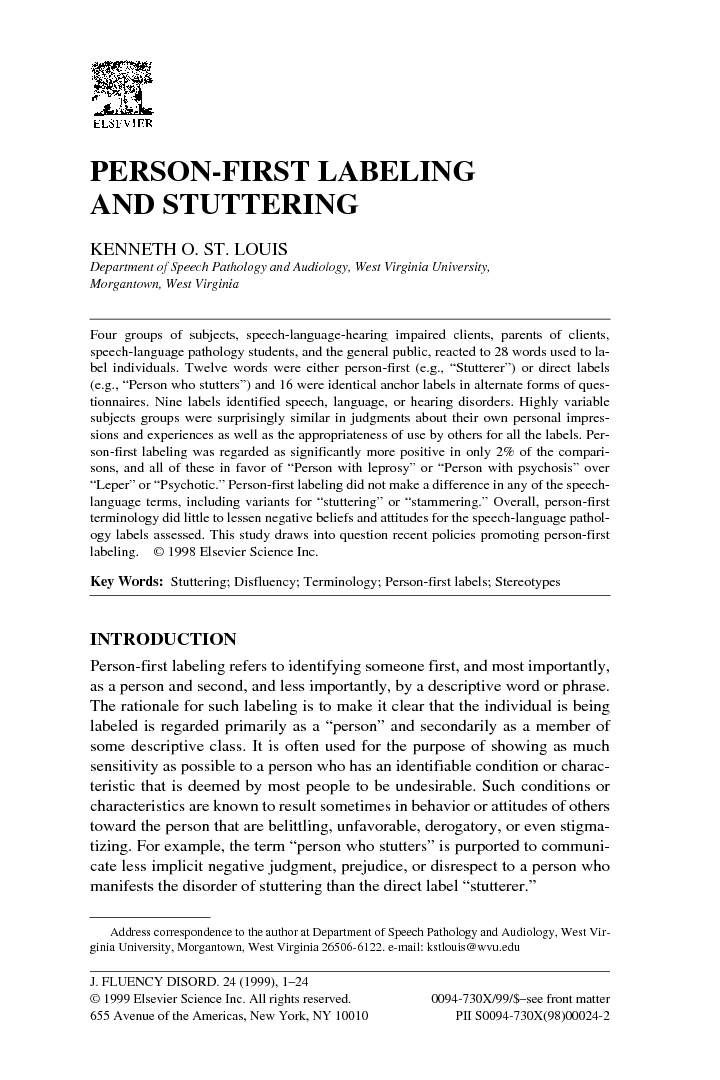 Four groups of subjects, speech-language-hearing impaired clients, parents of clients, speech-language pathology students, and the general public, reacted to 28 words used to label individuals. Twelve words were either person-first (e.g., “Stutterer”) or direct labels (e.g., “Person who stutters”) and 16 were identical anchor labels in alternate forms of questionnaires. Nine labels identified speech, language, or hearing disorders. Highly variable subjects groups were surprisingly similar in judgments about their own personal impressions and experiences as well as the appropriateness of use by others for all the labels. Person-first labeling was regarded as significantly more positive in only 2% of the comparisons, and all of these in favor of “Person with leprosy” or “Person with psychosis” over “Leper” or “Psychotic.” Person-first labeling did not make a difference in any of the speech-language terms, including variants for “stuttering” or “stammering.” Overall, person-first terminology did little to lessen negative beliefs and attitudes for the speech-language pathology labels assessed. This study draws into question recent policies promoting person-first labeling.

Person-first labeling refers to identifying someone first, and most importantly, as a person and second, and less importantly, by a descriptive word or phrase. The rationale for such labeling is to make it clear that the individual is being labeled is regarded primarily as a “person” and secondarily as a member of some descriptive class. It is often used for the purpose of showing as much sensitivity as possible to a person who has an identifiable condition or characteristic that is deemed by most people to be undesirable. Such conditions or characteristics are known to result sometimes in behavior or attitudes of others toward the person that are belittling, unfavorable, derogatory, or even stigmatizing. For example, the term “person who stutters” is purported to communicate less implicit negative judgment, prejudice, or disrespect to a person who manifests the disorder of stuttering than the direct label “stutterer.” Advocating person-first labeling began in the field of special education in the 1980s, an area that has struggled to use labels that do not carry unintended negative meanings. For example, the terms “idiot” and “moron” were originally descriptive terms referring to various levels of intelligence similar to severe or moderate “mental retardation,” “mental impairment,” “cognitive impairment,” and so on. As terms have acquired unintended negative meanings beyond the original usage, professionals in this area have tended to suggest less pejorative alternatives. Person-first labeling is one form of linguistic “de-perjoration” and in the past several years has spread to other areas, including speech-language pathology in general and stuttering in particular. Following the lead of some in the stuttering self-help movement, the American Speech-Language-Hearing Association (ASHA) began to advocate the use of first-person labeling. Since 1991, ASHA has recommended that authors use person-first terminology in all ASHA publications for the purpose of demonstrating that speech-, language-, or hearing-disordered individuals are recognized as persons first and communicatively disordered second. In 1993, ASHA adopted this as a policy for all documents and publications (Executive Board Meeting Minutes, 1993). But the recommended changes did not stop there. A short article, presumably written by those in charge of editorial policy appeared in ASHA’s house organ, Asha, entitled, “Person First, Please” (ASHA News, 1994). In addition to recommending person-first language, the article suggested that authors use terms such as “disability” or “disorder” but avoid terms like “impairment” and “handicap.” It also recommended using the term, “disfluent” but avoiding “dysfluent,” presumably because the prefix “dys” connotes abnormality and “dis” connotes difference. “Older” was recommended, but “old,” “aging,” and “elderly” were not. 1 There has been very little public debate—and indeed little research (but see Robinson & Robinson, 1996 below)—to justify the adoption of such a policy by professional associations or individuals. For these reasons, this study was undertaken to determine the extent to which person-first versus direct-label terminology affects beliefs and attitudes associated with fluency disorders and selected other speech-language disorders. Method Four related investigations were carried out with speech and/or language-disordered clients, parents of clients, speech-language pathology students, and the general public. All four investigations utilized questionnaires with the same 28 labels, listed in Table 1. Half of 12 pairs of person-first and direct labels appeared on alternate versions of questionnaires, each containing an equal number of person-first and direct labels. For example, one version contained “Person who stutters” and “Smoker”; the alternate version contained “Stutterer” and “Person who smokes” (Table 2). Additionally, all questionnaires had the same 16 “anchor labels” to disguise the purpose of the study and provide anchor points for comparing the person-first versus direct labels (e.g., “Crazy”; “Disfluent”). Identical anchor labels in alternate versions of the questionnaires were also included to allow estimates of normal variability among subject groups as well as to provide benchmarks from which to evaluate differences between the responses for direct versus person-first labels. Of the 28 total labels, nine identified speech-language-hearing disorders, including five pairs with person-first versus direct labels and four as anchor labels. Subjects in each study were assigned at random to one of two components (see below) and to the alternate versions and word orders of questionnaires. College senior and graduate students enrolled in courses in stuttering were trained to administer the questionnaire and were assigned to locate from one to five respondents (or to take it themselves), depending on the subject group being tested. Past and current clients or parents of young clients were solicited as part of a client audit at West Virginia University Speech Clinic or at other locations. Public respondents were required not to be speech-language-hearing professionals but were recruited by, and generally well acquainted with, the students soliciting questionnaires.

The results of this study suggest that for the speech-language pathology labels assessed, person-first terminology does very little to lessen negative attitudes of the public. Consequently, and to lessen the “trivialization” and confusion mentioned earlier, the author submits that policies by self-help groups, professional associations or journal editors, the media, publishers, and others promoting person-first and other types of labeling terminology, while clearly beneficial in some contexts, should not be made lightly. If policies are justified by the argument that certain labels will lessen or remove negative attitudes, or that certain labels will increase or promote positive attitudes or sensitivity, then public and professional opinion should be garnered for support. And, the information gathered should be shared and discussion encouraged. It is possible that a policy insisting on person-first terminology in the area of speech-language pathology, in general, or in fluency disorders, in particular, while well intentioned, may not be helpful in fostering appreciation of clients as people but simply confuse everyone concerned by suggesting that past labels—for which the overwhelming consensus is that they are not pejorative—are now unacceptable. Furthermore, if labels are to be changed in the interest of enhancing sensitivity to those with communication disorders, the author submits that words or phrases used to label or describe people or disorders (e.g., “stutterer” versus “person who stutters”) need to be considered carefully and individually. That is, the categories or types of words to which a certain policy applies should not be allowed to expand haphazardly, thoughtlessly, or needlessly. Wholesale decisions involving groups of seemingly related words may create more problems than they solve. It is never too late to debate questions such as the following in regard to labeling terminology. In the interest of better understanding the people we serve, where should lines be drawn between labels that are pejorative and those that are acceptable? By whom should the lines be drawn? Should lines even be drawn? And, how are lines that have been drawn unnecessarily either erased or redrawn?