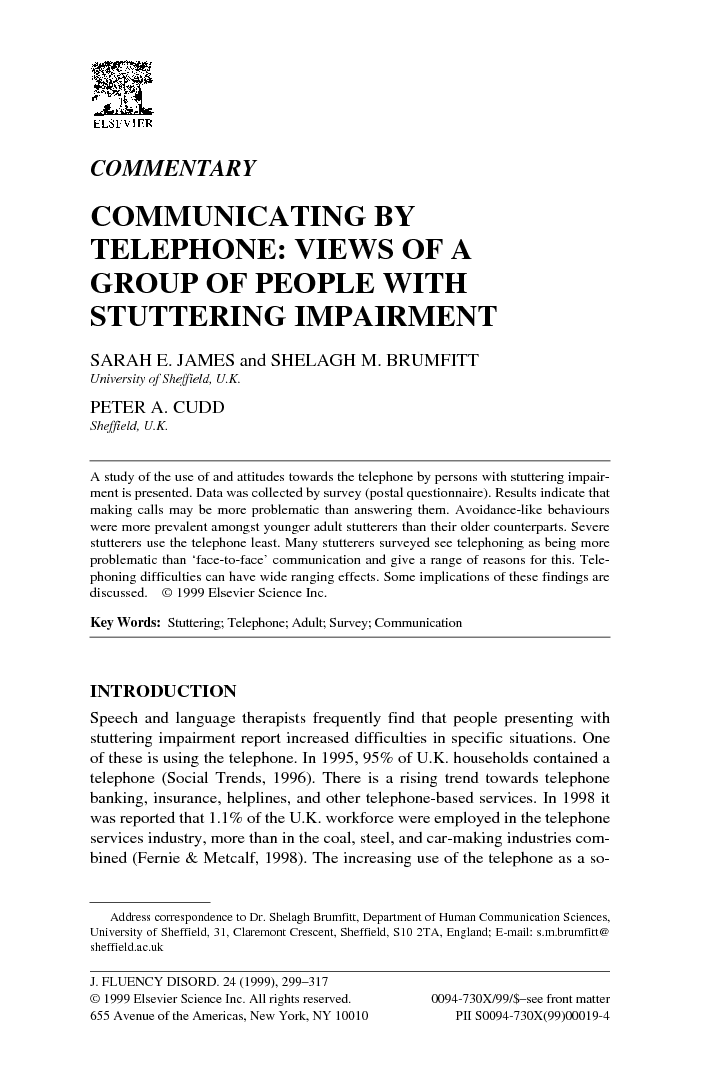 A study of the use of and attitudes towards the telephone by persons with stuttering impairment is presented. Data was collected by survey (postal questionnaire). Results indicate that making calls may be more problematic than answering them. Avoidance-like behaviours were more prevalent amongst younger adult stutterers than their older counterparts. Severe stutterers use the telephone least. Many stutterers surveyed see telephoning as being more problematic than ‘face-to-face’ communication and give a range of reasons for this. Telephoning difficulties can have wide ranging effects. Some implications of these findings are discussed.

The qualitative treatment of the data collected in the course of this investigation has revealed interesting findings which suggest further research. Results indicate that telephoning may indeed be a problematic speaking situation for some people with stuttering impairment, particularly those in early adulthood or whose stutter is severe. There is evidence to suggest that some stutterers may find making calls more problematic than answering them. Respondents' own perceptions of the differences between ‘face-to-face’ and telephone interaction reflect some of these aspects and broad themes are apparent, but results also serve to highlight the heterogeneous nature of stuttering difficulties even when subjects are drawn from a limited population such as is the case in this study. Many of the factors which were perceived as a cause of difficulty bear relation to broader aspects of stuttering impairment, for example, the role of anticipation and interlocutor presence; further investigation into these aspects is warranted, particularly the differences between making and answering calls. Our findings support the contention that inability to use the telephone effectively may form a serious communicative handicap for some stutterers; the effects of telephoning problems have been seen to be far reaching, impinging upon social life and career. The challenge to identify and develop effective therapeutic approaches to telephoning problems is therefore apparent.Johnson Darley Spriesterbach 1963, Kaasin Bjerkan 1992 and Trotter Bergman 1957