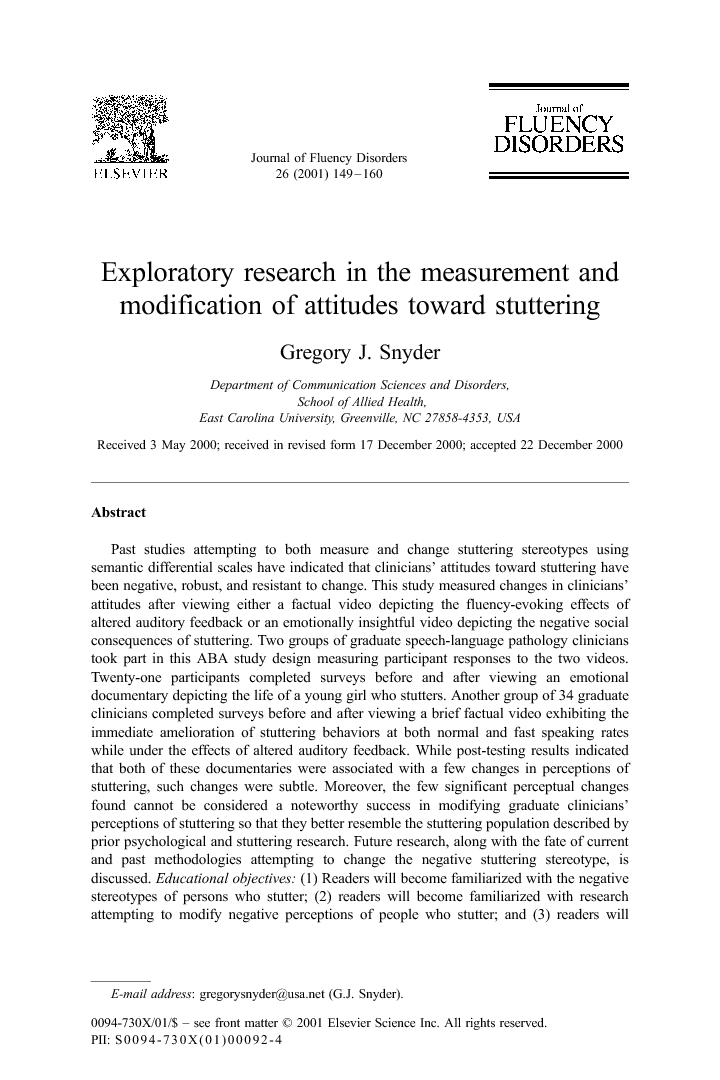 Past studies attempting to both measure and change stuttering stereotypes using semantic differential scales have indicated that clinicians' attitudes toward stuttering have been negative, robust, and resistant to change. This study measured changes in clinicians' attitudes after viewing either a factual video depicting the fluency-evoking effects of altered auditory feedback or an emotionally insightful video depicting the negative social consequences of stuttering. Two groups of graduate speech-language pathology clinicians took part in this ABA study design measuring participant responses to the two videos. Twenty-one participants completed surveys before and after viewing an emotional documentary depicting the life of a young girl who stutters. Another group of 34 graduate clinicians completed surveys before and after viewing a brief factual video exhibiting the immediate amelioration of stuttering behaviors at both normal and fast speaking rates while under the effects of altered auditory feedback. While post-testing results indicated that both of these documentaries were associated with a few changes in perceptions of stuttering, such changes were subtle. Moreover, the few significant perceptual changes found cannot be considered a noteworthy success in modifying graduate clinicians' perceptions of stuttering so that they better resemble the stuttering population described by prior psychological and stuttering research. Future research, along with the fate of current and past methodologies attempting to change the negative stuttering stereotype, is discussed. Educational objectives (1) Readers will become familiarized with the negative stereotypes of persons who stutter; (2) readers will become familiarized with research attempting to modify negative perceptions of people who stutter; and (3) readers will become familiarized with possible explanations for the persistence of negative stuttering stereotypes.