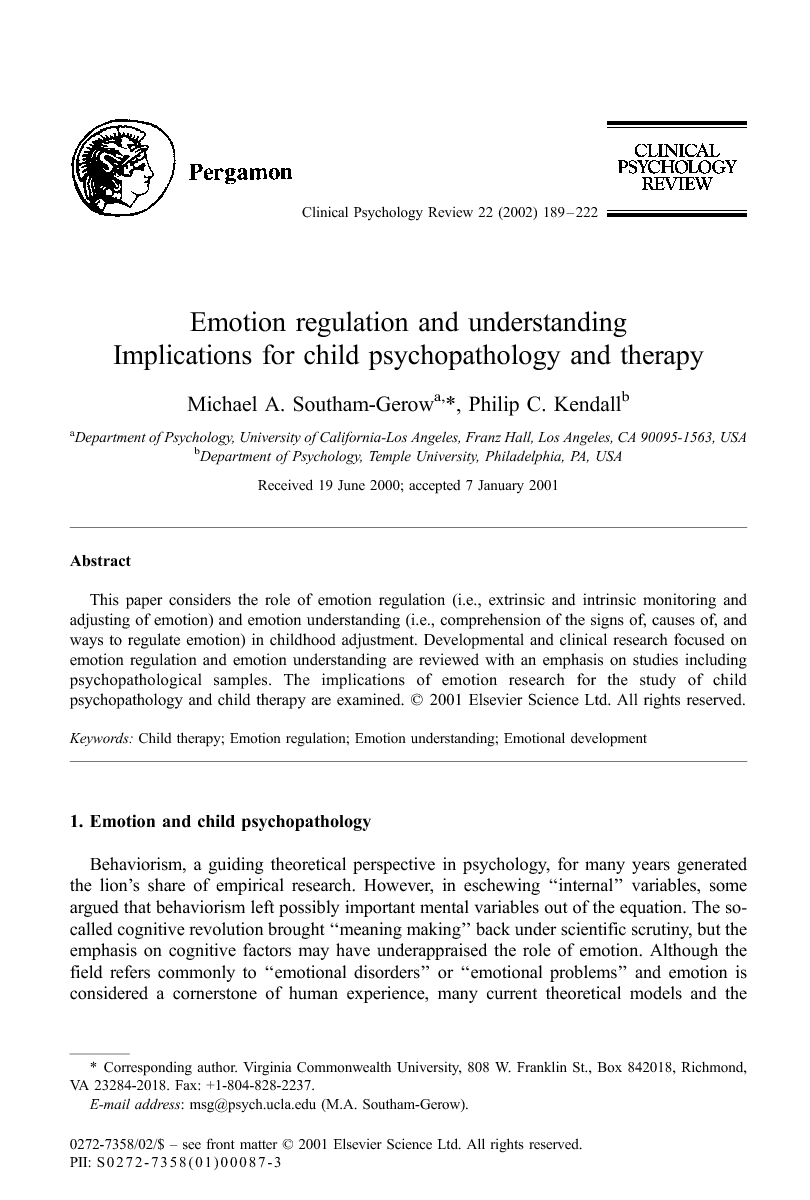 This paper considers the role of emotion regulation (i.e., extrinsic and intrinsic monitoring and adjusting of emotion) and emotion understanding (i.e., comprehension of the signs of, causes of, and ways to regulate emotion) in childhood adjustment. Developmental and clinical research focused on emotion regulation and emotion understanding are reviewed with an emphasis on studies including psychopathological samples. The implications of emotion research for the study of child psychopathology and child therapy are examined.

Behaviorism, a guiding theoretical perspective in psychology, for many years generated the lion's share of empirical research. However, in eschewing “internal” variables, some argued that behaviorism left possibly important mental variables out of the equation. The so-called cognitive revolution brought “meaning making” back under scientific scrutiny, but the emphasis on cognitive factors may have underappraised the role of emotion. Although the field refers commonly to “emotional disorders” or “emotional problems” and emotion is considered a cornerstone of human experience, many current theoretical models and the research bodies they have generated have not adequately considered the role of emotion in development and psychopathology. Fortunately, recent research efforts by a diverse group of investigators suggests that the field is in the midst of an “emotion revolution” (cf. Fischer & Tangney, 1995). Research in developmental psychopathology in particular has led to an increase of emphasis on the importance of emotional processes in normative and atypical development (e.g., Cicchetti, 1984, Cicchetti & Cohen, 1995, Luthar et al., 1997 and Sroufe & Rutter, 1984). In addition, advances in neuroscience and psychophysiology have greatly expanded our knowledge about the neural and other psychophysiological concomitants of emotion and how these might impact adjustment (e.g., Caciopo et al., 1993, Davidson & Fox, 1982, Dawson, 1994, LeDoux, 1993, Nelson & Bloom, 1997, Panksepp, 1993, Porges et al., 1994 and Stansbury & Gunnar, 1994). Furthermore, an interest in emotion has been fueled by the concepts of emotional intelligence, emotional competence, and emotional education that are burgeoning in educational, scientific, medical, and legislative domains (e.g., Buck, 1993, Goleman, 1995, Greenberg et al., 1995, Repetti et al., 2000 and Salovey & Sluyter, 1997). The present review provides a framework for one focus of future research, the scientific study of the relations among emotion regulation, emotion understanding, and child adjustment (i.e., clinical child psychology). Overall, there are several objectives of the review. First, the paper provides a review of the literature on emotion regulation and emotion understanding examining developmental findings drawn from normative samples along with a smaller body of research, which has focused on emotion processes in at-risk and clinic-referred samples. After the review, the relevance of this research for studying and understanding child psychopathology is discussed. Finally, applications of the emotion research literature to child therapy research are described. Because most current treatment and prevention paradigms used in research settings are based in cognitive and behavioral formulations, there is a need to reexamine these in light of findings from emotion research. The review focuses on two aspects of emotion: emotion regulation and emotion understanding. This focus is not because they are the only areas of emotion research with relevance to clinical child psychology. For example, research on temperament and emotional intensity (EI; e.g., Bates & Wachs, 1994, Chess & Thomas, 1990, Eisenberg et al., 1996, Eisenberg et al., 1997, Kagan et al., 1988, Nachmias et al., 1996 and Park et al., 1997), psychophysiological work on emotion (e.g., Field et al., 1995, Katz & Gottman, 1995, Nachmias et al., 1996, Porges, 1995, Stansbury & Gunnar, 1994 and Zahn-Waxler et al., 1995), and the flourishing research on the neural aspects of emotion (e.g., Adolphs et al., 1996, Andreasen et al., 1992, Barkley, 1997, Davidson, 1994, Dawson, 1994, Fox, 1994b, Gray, 1990, Heller, 1990, Izard & Harris, 1995, Panksepp, 1990, Reiman et al., 1984, Rourke, 1988, Seidman et al., 1997 and Steinmetz, 1994) all represent critical areas for further study with importance to developmental psychopathologists. However, because one main goal of the paper concerns using emotion research to improve psychosocial intervention, the work on emotion regulation and emotion understanding was considered most relevant. Nonetheless, in this introduction, we briefly review research on temperament because of its critical importance in emotional development in general and its relevance to emotion regulation and emotion understanding in particular.

An important result of the directions we have outlined is the beginning of an integration of emotion into current conceptual models for child psychopathology and psychotherapy. The intention is not only the “practical” (i.e., improving psychopathology and treatment models) integration across and within disciplines but also integration on the conceptual level. The integration of emotion research could lead to a broadening of the cognitive-behavioral model such that emotion concepts are more explicitly included in models of psychopathology and therapy. Narrow conceptual models miss the heterogeneous nature of children's adjustment (see also Kazdin & Kagan, 1994 and Tolan et al., 1995). Integration of biological, social, cognitive, developmental, and emotional approaches will lead to a more complete analysis. Our emphasis has been on how emotion's role in psychopathology may be more thoroughly considered. A diversity of research may actually foster a theoretical shift-enhancing an emotion revolution. However, it will not be a revolution against the cognitive or behavioral or psychodynamic or biological perspectives but an evolution wherein emotion is included as an important and legitimate focus of study.