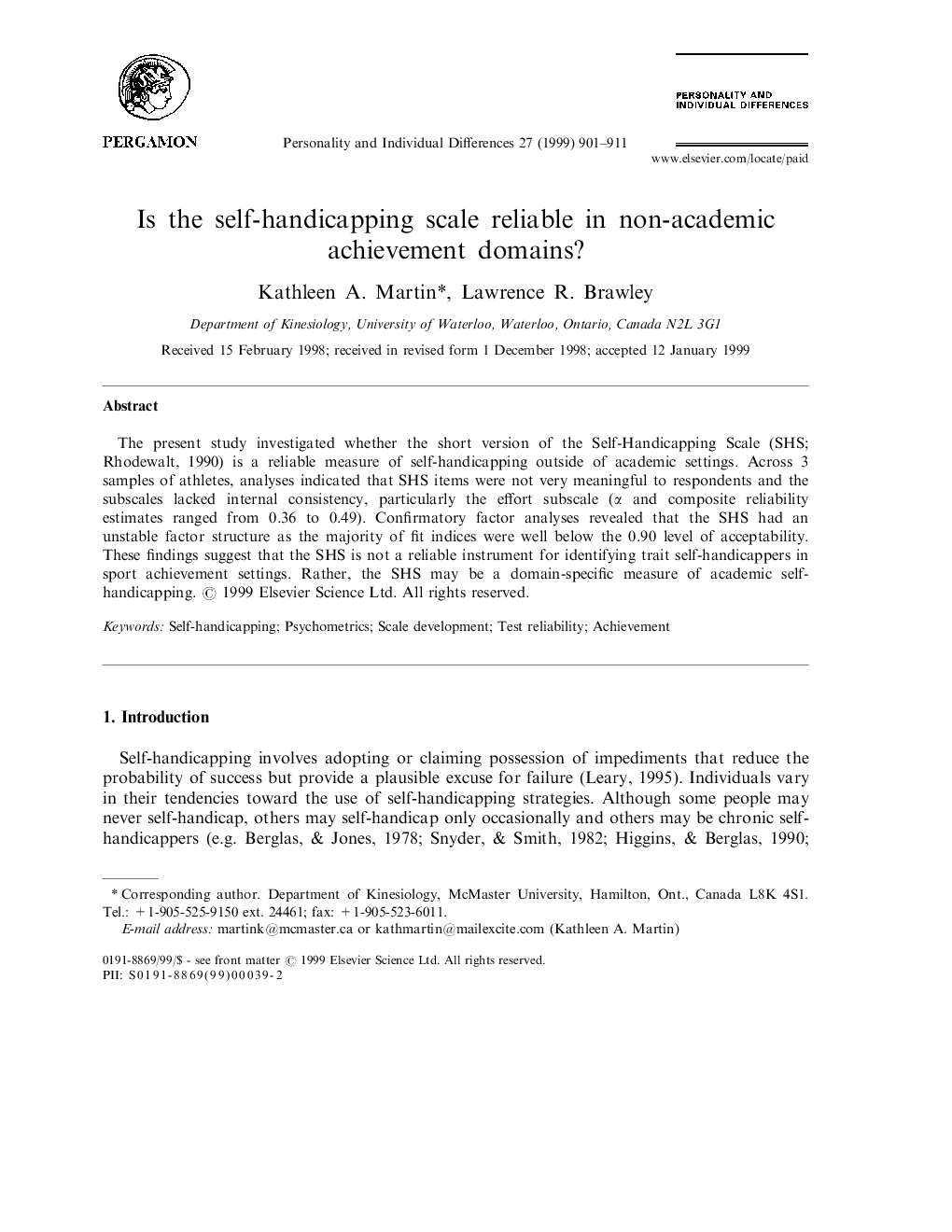 Abstract The present study investigated whether the short version of the Self-Handicapping Scale (SHS; Rhodewalt, 1990) is a reliable measure of self-handicapping outside of academic settings. Across 3 samples of athletes, analyses indicated that SHS items were not very meaningful to respondents and the subscales lacked internal consistency, particularly the effort subscale (α and composite reliability estimates ranged from 0.36 to 0.49). Confirmatory factor analyses revealed that the SHS had an unstable factor structure as the majority of fit indices were well below the 0.90 level of acceptability. These findings suggest that the SHS is not a reliable instrument for identifying trait self-handicappers in sport achievement settings. Rather, the SHS may be a domain-specific measure of academic self-handicapping.

Introduction Self-handicapping involves adopting or claiming possession of impediments that reduce the probability of success but provide a plausible excuse for failure (Leary, 1995). Individuals vary in their tendencies toward the use of self-handicapping strategies. Although some people may never self-handicap, others may self-handicap only occasionally and others may be chronic self-handicappers (e.g. Berglas, & Jones, 1978, Snyder, & Smith, 1982, Higgins, & Berglas, 1990 and Tice, 1991). An interest in identifying people who are prone to self-handicapping led Jones, and Rhodewalt (1982) to develop the Self-Handicapping Scale (SHS). In its original published form, the SHS consisted of 25 items that probed respondents' tendencies to use such self-handicaps as lack of effort, illness, procrastination or emotional upset in conjunction with evaluative performances. The scale also included items designed to assess concerns about achievement. In 1990, Rhodewalt re-analyzed the scale's factor structure and found that only 14 items loaded significantly (greater than 0.40) on one of two scale factors. He labelled these factors `excuse making' and `effort'. The excuse making subscale assesses the tendency to make excuses prior to evaluative performances (i.e. a claimed self-handicapping strategy) and the effort subscale taps an individual's willingness to withhold effort in achievement situations (i.e. a behavioral self-handicapping strategy). As a result of his findings, Rhodewalt (1990) recommended that researchers employ the revised 14-item SHS in lieu of the original 25-item instrument. Social psychologists have frequently used both the original and the revised SHS in studies of self-handicapping. These studies have demonstrated the utility of the SHS in predicting the use of various self-handicapping strategies such as claiming symptoms (Baumeister, Kahn, & Tice, 1990) and extenuating circumstances as self-handicaps (Strube, 1986, study 2), procrastinating (Ferrari, 1992) and failing to practice (Deppe, & Harackiewicz, 1996) or withholding practice effort on an evaluative task (Rhodewalt, & Fairfield, 1991). Researchers have also shown that the SHS is significantly correlated with constructs that are theoretically linked with self-handicapping such as public self-consciousness, social anxiety and self-esteem Strube, 1986 and Rhodewalt, 1990. Although it has been suggested that the SHS assesses trait self-handicapping across a variety of domains such as sport competition and interpersonal relationships (Rhodewalt, Saltzman, & Wittmer, 1984; Rhodewalt, 1990), the scale's validity and reliability have not been examined in these contexts. Rather, reports of the SHS's psychometric properties have been limited to the domain in which the SHS was originally developed-intellectual achievement among college undergraduates Strube, 1986 and Rhodewalt, 1990. To assess the reliability and factor structure of the SHS in non-academic achievement domains, the present study examined these properties of the 14-item SHS when administered to competitive athletes. Athletes were considered an ideal population in which to examine the psychometrics of the SHS for two reasons. First, self-handicapping is most likely to occur in publicly evaluated situations that are important to the individual's self-concept and where the individual is evaluated against very high standards or relative to another person's performance Berglas, & Jones, 1978 and Self, 1990. These conditions are inherent to sport competition where an athlete's self-concept can be strongly influenced by self- and public-evaluations of his or her physical abilities (cf. Vallerand, Pelletier, & Gagné, 1991). Hence, self-handicapping is predicted to occur in the sport domain (Rhodewalt et al., 1984). In their seminal paper, Jones, and Berglas (1978, p. 201) noted the strong potential for self-handicapping among athletes when they stated that “self-handicappers are legion in the sports world from the tennis player who externalizes a bad shot by adjusting his racket strings, to the avid golfer who systematically avoids taking lessons or even practicing on the driving range”. If self-handicapping is as common among athletes as Jones, and Berglas (1978) believed it to be, then the SHS should identify athletes with a tendency to use self-handicaps. Second, preliminary studies of self-handicapping in sport have identified two types of self-handicapping strategies used by athletes. Some athletes self-handicap by failing to increase their practice effort prior to an important competition (Rhodewalt et al., 1984) or by providing excuses for potential failure prior to an upcoming event (Carron, Prapavessis, & Grove, 1994; Hausenblas, & Carron, 1996). These two self-handicapping strategies-withholding effort and excuse making-are assessed by the two subscales of the 14-item SHS (Rhodewalt, 1990). Hence, if it is valid in sport achievement settings, the SHS should detect and measure athletes' proclivity to use these two types of self-handicaps. In summary, because athletes are believed to frequently use self-handicaps (Berglas, & Jones, 1978) by withholding practice effort (Rhodewalt et al., 1984) and making excuses Carron et al., 1994 and Hausenblas, & Carron, 1996, they were considered an ideal population in which to assess the reliability and factor validity of the 14-item SHS. If the SHS is reliable and valid in achievement domains other than those related to academics, then it should be psychometrically sound when administered to samples of competitive athletes. To address this issue, the psychometric properties of the SHS were assessed across three samples of athletes. In addition, confirmatory factor analyses were performed to examine the validity of the two-factor model proposed by Rhodewalt (1990).