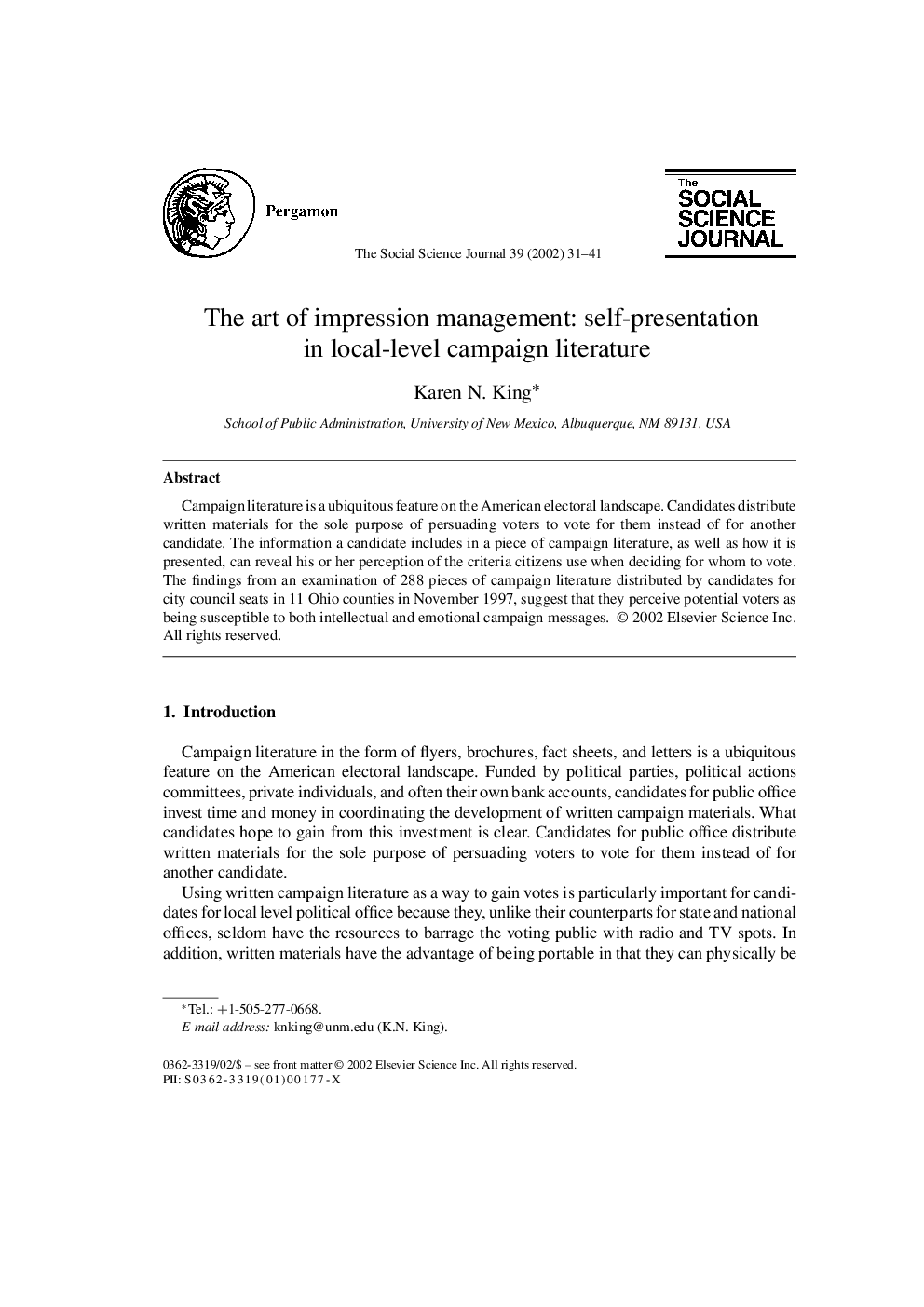 Abstract Campaign literature is a ubiquitous feature on the American electoral landscape. Candidates distribute written materials for the sole purpose of persuading voters to vote for them instead of for another candidate. The information a candidate includes in a piece of campaign literature, as well as how it is presented, can reveal his or her perception of the criteria citizens use when deciding for whom to vote. The findings from an examination of 288 pieces of campaign literature distributed by candidates for city council seats in 11 Ohio counties in November 1997, suggest that they perceive potential voters as being susceptible to both intellectual and emotional campaign messages.

5. Conclusion In our media-saturated society, image is of prime importance to individuals seeking election to public office (Braden, 1996). They must identify that image of themselves they think will persuade voters to cast their ballots for them, and then plan their campaign strategies to reinforce that image. Every communication must reinforce a chosen image in order to maximize the possibility of getting a favorable vote. Although writing about face-to-face communication, Goffman (1959) could have been referring to the instrumental relationship between a candidate and his or her perspective supporters when he describes an individual as “expressing himself in such a way as to give them the kind of impression that will lead them to act voluntarily in accordance with his own plan” (p. 4). This study asked the question “What image of themselves do candidates for local office think will win the support of the voting public?”. The data set identified for exploring this question was 288 pieces of written campaign literature voluntarily submitted by 198 candidates for city council seats in 11 Ohio counties in November 1997. Using a content analysis methodology, each exhibit was examined for specific elements of content and style. These elements were counted and then converted into percentages. Discussed were components that were those elements that were included with regularity (over 40% of exhibits) and those which were not (under 11% of exhibits) (Table 2). Table 2. Analysis of contents of campaign literature in 11 Ohio counties Number Percentage Content Words/phrases about Educational experience 110 38 Brochure 75 26 Professional background 157 55 Flyer/fact sheet 72 25 Community involvement 158 55 Card/business card 107 37 Experience as elected official 121 42 Need for change 33 11 Promises if elected 97 34 Attack on opponent 9 3 Family membership 129 45 Veteran status 29 1 Church affiliation 74 26 Being a good neighbor 142 49 Endorsements by Friends 11 4 Family members 0 0 Political allies 41 14 Professional colleagues 24 8 Other sources 24 8 Reciprocity 31 11 Style Format Brochure 75 26 Flyer/fact sheet 72 25 Card/business card 107 37 Other 20 7 Use of photographs 190 66 Self 166 8 With family members 55 19 Working in community as political candidate 32 112 Working as professional 7 2 Use of symbols 21 7 Use of signs 100 35 Arrangements of parts Terse 96 33 Prolix 179 62 Diverse 220 76 Repetitious 38 14 Use of color 174 6 Note: Number of exhibits: 288 (1.45 per candidate). Number of candidates: 198 (131 male; 67 female). Electoral status of candidates: 84 incumbents; 114 challengers. Table options What can be concluded from the findings of this study? To begin with, the candidates who are represented by these pieces of campaign literature created an image of themselves as experienced, competent, and well-informed members of the community. Thus, they appeared to think that voters would be swayed by appeals to their intellectual capacity for making rational judgments based on concrete qualifications. In a study of candidates in the 1994 U.S. midterm elections, Owens (1998) points out the importance of candidate characteristics (previous political experience, professional backgrounds, celebrity status) in generating votes. Although writing about national level as opposed to local level campaigns, he may have identified a common variable in how voters select candidates to support. On the other hand, descriptions of candidates’ family units and photographs of them with family members are very powerful emotional symbols seeming to say: “I am one of you” and “I exemplify family values.” This theme of family values has permeated political discourse in recent years and is sure to be emphasized in the elections of 2000 and beyond. Another equally emotional reason for the inclusion of family images may be that candidates feel it is necessary to tie into voter biases, perhaps unconsciously, by showing that they are not representatives of nontraditional family arrangements. Findings from this study suggest that candidates for local public office perceive potential voters as susceptible to both intellectual and emotional campaign messages. It is evident that candidates conceive of the voters as being concerned with issues of competency and trustworthiness but it is equally obvious that they employ messages and images to evoke positive emotional responses. The mix of approaches probably depends on the personality of the candidate, the type of election, the nature of the opposition, and the political culture of the community. Written campaign literature reflects only one vote-getting strategy of candidates for local office. Ascertaining how accurate it is in portraying the image an individual candidates wishes to project would require an extensive examination of all the products of a candidate’s run for public office, for example, speeches, debates, radio and television spots, letters to the editors, yard signs, and informal contacts with potential voters. Interviewing candidates directly about their efforts to present themselves in a certain way would also be important. Nevertheless, a content analysis of campaign literature represents a starting place to begin understanding the strategic decisions candidates make about image management when running for local political office.