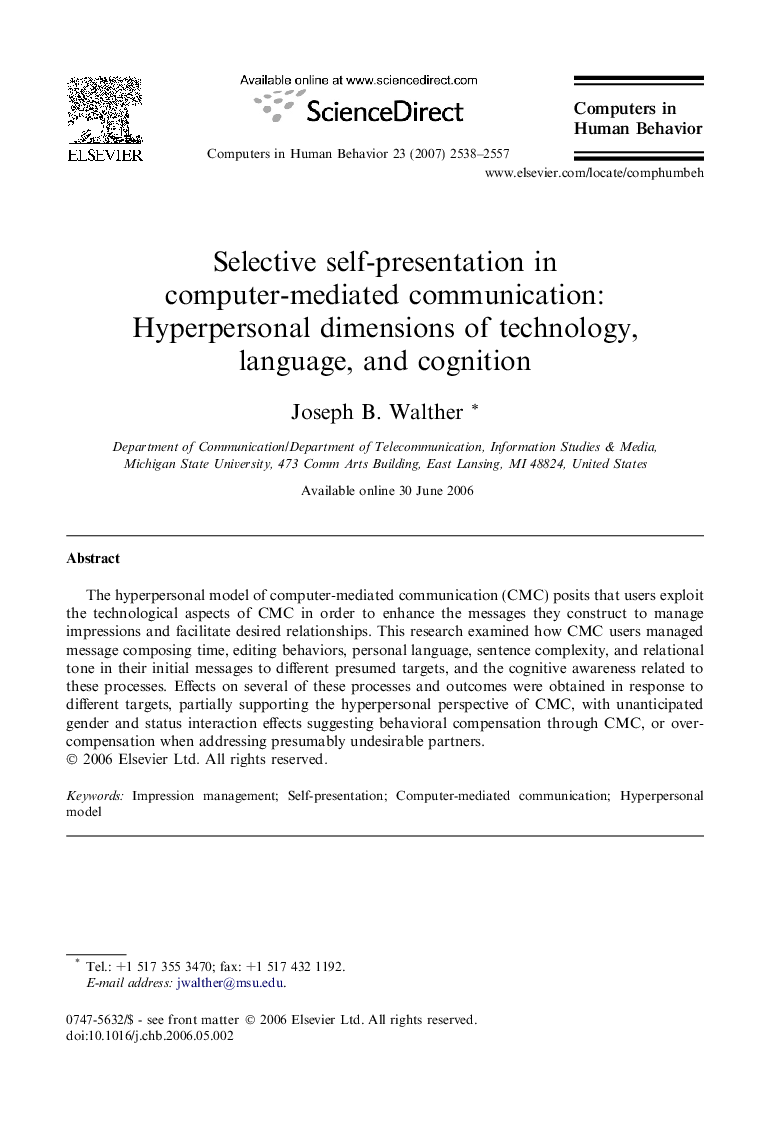 Abstract The hyperpersonal model of computer-mediated communication (CMC) posits that users exploit the technological aspects of CMC in order to enhance the messages they construct to manage impressions and facilitate desired relationships. This research examined how CMC users managed message composing time, editing behaviors, personal language, sentence complexity, and relational tone in their initial messages to different presumed targets, and the cognitive awareness related to these processes. Effects on several of these processes and outcomes were obtained in response to different targets, partially supporting the hyperpersonal perspective of CMC, with unanticipated gender and status interaction effects suggesting behavioral compensation through CMC, or overcompensation when addressing presumably undesirable partners.

. Introduction The most interesting aspect of the advent of computer-mediated communication (CMC) is how it reveals basic elements of interpersonal communication, bringing into focus fundamental processes that occur as people meet and develop relationships relying on typed messages as the primary mechanism of expression. While many encounters in electronic space involve no more than simple queries for and provision of information, other relationships evolve over CMC. CMC-based relationships range from professionally friendly to quite intimate (see e.g. Landis, 1994 and Reid, 1991). Some lead to off-line relations (e.g. Baker, 1998, Parks and Floyd, 1996 and Parks and Roberts, 1998), while others remain entirely online (e.g. Allen, 1996 and Preece, 2001). Regardless of eventual trajectory, some basic processes take place during first acquaintanceship, where CMC differs substantially from face-to-face (FtF) communication, in form if not in function. Physical features such as one’s appearance and voice provide much of the information on which people base first impressions FtF, but such features are often unavailable in CMC. Various perspectives on CMC have suggested that the lack of nonverbal cues diminishes CMC’s ability to foster impression formation and management (see e.g. Kiesler, 1986 and Kiesler et al., 1984), or argued impressions develop nevertheless, relying on language and content cues (see e.g. Baym, 1995, Walther, 1992 and Walther, 1993). One approach that describes the way that CMC’s technical capacities work in concert with users’ impression development intentions is the hyperpersonal model of CMC (Walther, 1996). The model specifies several concurrent dynamics in sender, receiver, channel, and feedback systems that are affected by CMC attributes, which promote the development and potential exaggeration of impressions and relationships online: As receivers, CMC users idealize partners based on the circumstances or message elements that suggest minimal similarity or desirability. As senders, CMC users selectively self-present, revealing attitudes and aspects of the self in a controlled and socially desirable fashion. The CMC channel facilitates editing, discretion, and convenience, and the ability to tune out environmental distractions and re-allocate cognitive resources in order to further enhance one’s message composition. Finally, CMC may create dynamic feedback loops wherein the exaggerated expectancies are confirmed and reciprocated through mutual interaction via the bias-prone communication processes identified above. As a cross-contextual model, the hyperpersonal framework has received support in a variety of settings, involving both dyads and groups, in educational, romantic, and group/leadership settings (e.g., Chester and Gwynne, 1998, Gibbs et al., 2006 and Wickham and Walther, in press, resp.). With regard to its propositions regarding impression formation and management, empirical tests have shown how CMC leads to more extreme impressions than FtF (Hancock & Dunham, 2001) and more positive relations over time compared to FtF (Walther, 1997) and compared to CMC accompanied by users’ photos (Walther, Slovacek, & Tidwell, 2001). Few studies have explored aspects of senders’ behavior, with exceptions focusing on self-disclosure, personal questions, and verbal expressions of affinity in CMC relative to FtF communication (Tidwell and Walther, 2002 and Walther et al., 2005). No research to date has specifically and empirically focused on the elements of the model that posited (1) how CMC users exploit interface attributes of the channel in order to attempt to enhance impressions and relational messages, (2) message characteristics corresponding to these efforts, and (3) the degree to which cognitive resources are allocated to message composition in CMC, all in the service of selective self-presentation online. The present study examines these processes in an experiment designed to identify the degree to which CMC participants deliberately affect their self-presentations and relational messages by using the affordances of CMC.